And it was easy. Go figure.

Share All sharing options for: Cubs 8, Giants 4: Jeff Samardzija, At Last, A Winner

And in the end, getting a win for Jeff Samardzija looked so easy that you had to wonder, "What took so long?"

All of that against a team that came in with the best record in baseball, in a ballpark that normally suppresses run-scoring. Go figure, right?

Almost everyone contributed to the Cubs' offensive output, including the Giants, who played sketchy defense, and Samardzija himself, with an RBI double. Nate Schierholtz hit his first home run of the season. San Francisco is about the last place I'd have expected that to happen. Schierholtz hit only six home runs at AT&T Park as a member of the Giants in 573 at-bats there. As a member of the Cubs, he's hit two home runs there in 14 at-bats -- he also hit a homer in San Francisco last year, a blast that gave the Cubs a 1-0 victory last July 27.

Because baseball. Don't you love it?

Samardzija wasn't as sharp as he had been through some of his previous starts, and this time, he didn't have to be. His own fielding error in the first inning gave the Giants a 1-0 lead, and after the Schierholtz dinger tied the game, Pablo Sandoval hit a two-run homer off Shark to give the Giants a 3-1 lead and that made it feel like all the other Samardzija starts -- just not enough runs.

But then the Cubs started scoring runs in bunches (winding up with more runs than they had scored in their last three games combined) and nearly everyone contributed. Welington Castillo, Anthony Rizzo, Emilio Bonifacio, Luis Valbuena and Schierholtz all had two hits and even Darwin Barney chipped in with a pair of RBI, and Samardzija wound up his seven-inning stint with 10 strikeouts (and no walks). His ERA went up to 1.68, just slightly behind Adam Wainwright (1.67) for the major-league lead.

I was surprised that Shark hit for himself in the eighth -- at 104 pitches starting the inning, maybe it was time to sit him down and say, "Hey, congrats on the win." Justin Grimm and Neil Ramirez nailed down the victory, the first for Samardzija since August 24, 2013 against the Padres, a stretch of 16 straight winless starts for him. The seven innings give Shark 75 for the season, tied for fifth in the major leagues.

Obviously, the individual "win" doesn't mean that much. We all know that. And the Cubs are just 2-9 in Samardzija's 11 starts. Still, it's a nice thing to have.

A couple more notes about a very satisfying, not-really-expected win:

The camo uniforms that the Cubs wore had the same mistake they made last year -- a white border around the camo lettering against a gray background, which made the lettering almost impossible to read. Why they wouldn't have chosen blue to border the letters and numbers, I have no idea. The Giants' home uniforms, also with camo letters and numbers, had an orange border around them, making them easy to read against the Giants' cream-colored jerseys.

And... a few minutes after Sandoval's home run, I got a text from a friend of mine, someone who used to sit with me often in the bleachers, but who moved to San Francisco several years ago, reading, "Guess who got Sandoval's home run?" 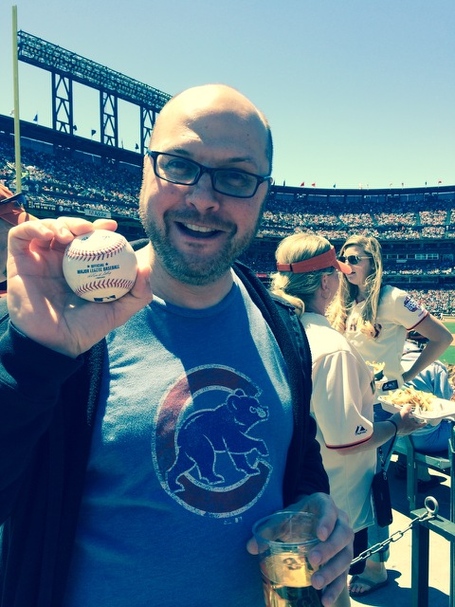 Well, that's very cool. And no "throwing it back" -- that's dumb, and they don't do that in San Francisco, anyway. He told me he traded it for an order of garlic fries, which sounds like a fair deal to me.

It sure won't be as easy Tuesday night, when Jake Arrieta faces Tim Hudson. So enjoy this one while you can.