A Cubs Stadium Proposal That Will Please Everyone!

BCB's Danny Rockett has the perfect solution for the Cubs' renovation woes.

Share All sharing options for: A Cubs Stadium Proposal That Will Please Everyone!

As I sit in a downtown Milwaukee hotel room, eagerly awaiting tonight's Cubs/Brewers game and reading article after article about the Cubs' newly proposed stadium renovation bluff, and Crane Kenney's "We're moving to the suburbs" bluff, I can't help but wonder about at least the possibility of a brand new stadium. You know, like Miller Park. They have a retractable dome, ample parking, sausage races, a beer slide, and a video board that tells you when and how to cheer. Plus. The lack of batting tees in the Brewers clubhouse is quite admirable.

Now personally, I love Wrigley Field. It's perfect in every way. I want nothing to change at all. But I do empathize with those who have more modern sensibilities. They think Wrigley's a dump and prefer the bells and whistles that come with new stadium. That's fine. To each their own. But I have a solution where everybody gets what they want! (At least half the time.)

You've heard of "throwback uniforms?" How about "throwback stadiums?!"

This is a solution that's a win-win for everybody. Here's how it would work: Landmarked Wrigley Field stays where it is and hosts the Cubs for 40 or so day games a year. The Wrigleyville neighborhood never has to contend with another night game emptying out with loud drunken fans peeing on their lawns and the Cubs could satisfy the even most staunch Cubs fan purists by taking down all light standards to a pre-1988 incarnation. The rooftops would likely go out of business with only half the games to steal from the Cubs, and eventually revert to the "two guys in lawnchairs with a cooler" look as well. It's the Wrigley we all love and remember from our childhoods. A perfect, old-fashioned baseball paradise.

But for the other 40 games, I propose the Cubs break ground for a new 45,000-seat stadium at Montrose Beach. There's plenty of land. The views of the lake would be magnificent. There would be ample parking after knocking out that pesky bird sanctuary. And all summer long you could roll right off the beach to a ballgame at a modern stadium with modern amenities, such as sinks that turn on by themselves, urinals, and video screens that tell you when to clap, how to cheer and what to buy. Here's my artist's rendering which I plan to submit to the Ricketts later this month after I learn how to draw. 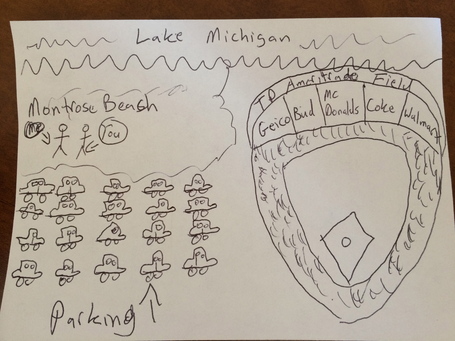 So there you have it. Wrigley as a "Throwback Stadium." Half the games at Wrigley Field where old guys like me will be happy watching our Cubs in the daytime. And half at night at the new super deluxe stadium at Montrose Beach. Everyone's happy. Problem solved. You're welcome.