Who knew it would be that simple to generate a two-homer game?

Jim Deshaies touched on this during Anthony Rizzo 's big afternoon at Miller Park -- it isn't necessarily the day off that got him to hit a pair of two-run homers, but JD said sometimes a player just needs a day to clear his head. That Rizzo got -- he didn't even take BP Friday, and of course in the blowout he wasn't needed to pinch-hit -- and he responded with his biggest game of the season, and the Cubs completed an 8-0 shutout of the Brewers. That's the second time this year the Cubs have blanked the Brewers at Miller Park with Jason Hammel as the starting pitcher. (Now they'll have to wait until September to try that again, and by then, Hammel is likely going to be pitching in another uniform.)

Hammel completed seven innings, allowed just four hits and no walks, and struck out eight. I assume scouts were watching this one, and since June begins tomorrow, trade interest in Hammel ought to ratchet up. The Blue Jays seem a likely destination, as they've been interested in Cubs pitchers, but probably don't have the prospects to land Jeff Samardzija (and likely wouldn't be able to sign him, either).

About this game -- really, really unexpected, again. I noted in the preview how poorly the 6-7-8-9 hitters in today's lineup had hit before the game. Of course, they then went out and proved me completely wrong. Chris Coghlan, John Baker, Darwin Barney and Hammel came in hitting a collective .155. So naturally, they went 4-for-12 with three RBI and a pair of runs scored, and that's one hit for each of those hitters. Justin Ruggiano, pinch-hitting in the 9 spot, also got a hit, his first triple of the season.

After Rizzo's first home run, it seemed as if Milwaukee pitcher Wily Peralta had suffered some kind of hamstring or other leg issue, but Brewers manager Ron Roenicke let him stay in the game -- you could see him walking around slowly and that could have affected his pitching in the later innings. The Cubs will certainly take it.

This game, then, comes under the category of "youneverknow," and nice work by everyone, especially in the five-run sixth that put the game out of reach.

Starlin Castro, who had a hit and a walk, was also supposed to get a day off in this series (Sunday), but apparently talked Rick Renteria out of it:

This isn't like last year when Castro was slumping badly and it seemed as if everyone in the world was begging Dale Sveum to give him a day off, which he finally did (coincidentally, also in Milwaukee). Castro's been hitting well and seems in a decent groove -- Rizzo had been scuffling a little -- so if Starlin says he's good to go, let him play, I think.

A few more things: first, thanks to BCBer elgato, who emailed me with this headline idea, which was perfect. Thanks, el. Credit where credit is due.

Second, the Cubs' ticket promo commercial that's driving me crazy ran again, at least twice, during this telecast. You know, this one (sorry, I'm unable to embed that here, so you'll have to click on it). You'll notice that at one point it says, "Next up, 20s and 30s"... decades that the Cubs have already celebrated. The next homestand is going to celebrate the 1940s.

It seems to me that it would have been easy to make multiple versions of this ad, with different decades, to run at the appropriate times. Running this one just makes the Cubs look bad. I worked in TV for 30 years, as many of you know, and this used to drive me nuts, when outdated promotions or ads ran. It wasn't under my purview to do that sort of thing, but I've always felt that TV, which is an immediate medium, ought to have things on air that are up-to-date.

Finally, during the game I thought I saw something odd about first-base coach Eric Hinske's uniform. Based on these TV screenshots, I was right: 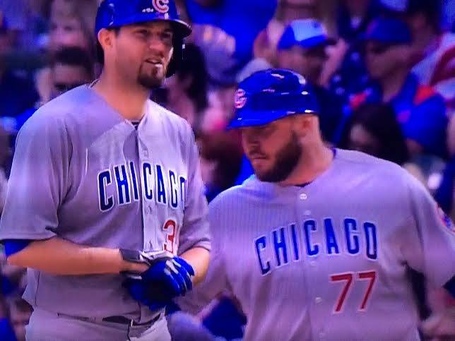 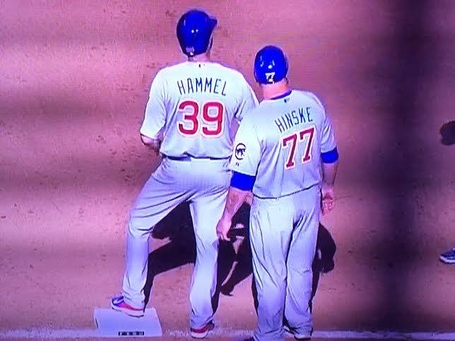 You'll notice that the numbers on the back of Hinske's jersey have serifs on them (and don't match the sans-serif numbers on the front). That's the style that's worn on the Cubs' alternate, block-letter jerseys: 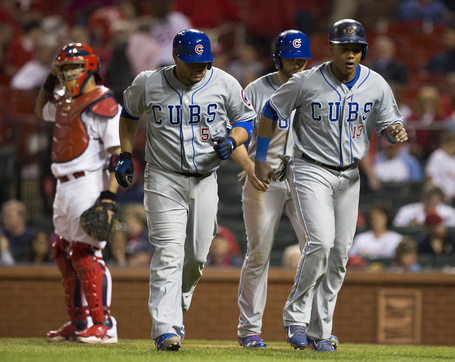 Here's another look at the wrong Hinske numbering: 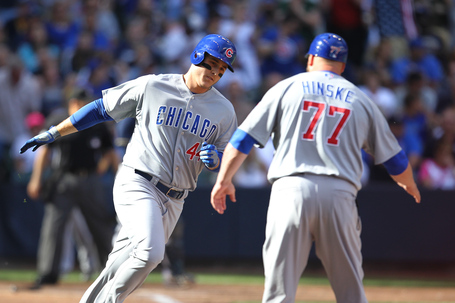 On the scale of things that are important, this obviously ranks pretty low. But I think the Cubs ought to get Hinske some numbers on the back of his jersey that match everyone else's (and the ones on the front, which you can clearly see are different).

Moving on to more important things, the Cubs have a chance, once again, to win a road series -- something they haven't done since last September 9-10-11 at Cincinnati. Jeff Samardzija takes the mound against Kyle Lohse. Now that, I think you'll agree, is important.