Cardinals 5, Cubs 4: Walks Will Hurt You, Every Time

The Cubs played well Sunday night, but hurt themselves with walks.

Share All sharing options for: Cardinals 5, Cubs 4: Walks Will Hurt You, Every Time

There's one thing you can say for certain about Cubs/Cardinals games: they are always entertaining.

Entertaining doesn't always win you games, and it didn't Sunday night, and the primary reason was walks.

Jason Hammel issued a walk with two out and no one on base in consecutive innings, the second and third, and the Cardinals took advantage both times. They scored two runs in the second inning and another in the third, and you just can't give that to a good team and expect to win.

Nevertheless, the Cubs climbed out of that hole with a nicely-done fourth inning of their own. Trailing 3-0, Ryan Kalish beat out an infield single and John Baker walked. Both advanced on a slow infield roller by Darwin Barney (who really looks completely lost at the plate) and scored on a single by Hammel, his first hit of the year. (No, this doesn't change my mind about the DH. Cubs pitchers are now 4-for-57 this year with 29 strikeouts.)

On the game continued. The Cardinals appeared to catch a break in the seventh when an infield out was overturned on replay, but Carlos Villanueva, in relief of Hammel, induced Yadier Molina to hit into an inning-ending double play. The Cubs also got an out overturned on review (charged as an error to Matt Carpenter) in the sixth, but could not take advantage. Neither review took very long, both shorter than two minutes.

The Cubs tied the game in the seventh when Luis Valbuena tripled down the right-field line (and appeared to nearly run out of gas before chugging into third; it was just his second triple in 662 Cubs at-bats) and scored on a wild pitch.

On the game continued again, pressing toward three hours but never dragging. It's one thing when you have a three-hour-plus game that goes on and on and on, never seeming to end; this one always had action and interesting strategy.

Hector Rondon was summoned for the Cardinals' ninth inning, his fourth straight game. I don't have a problem with this, especially since one of those games (Saturday) was just eight pitches and another (Friday) was only 12.

Again, as Hammel did, Rondon got himself in trouble with walks. After getting Jhonny Peralta on a nice called strikeout, he walked Randal Grichuk. A single by Mark Ellis followed, and then Rondon struck out Peter Bourjos, one out away from going to the bottom of the ninth in a tie game.

But the K of Bourjos had taken nine pitches, and Rondon was now at 18. Would you have left him in to face Matt Carpenter, or brought in Wesley Wright, who was ready?

Rick(y) stuck with Rondon, who walked Carpenter to load the bases.

Walks. They will hurt you, every time.

Molina was up next. This could have been a real coming-of-age at-bat for Rondon, facing one of the top hitters in the National League. Molina fouled off four of the first five pitches, then singled in two runs, deflating what was left of Cubs fans in a smallish crowd. (Despite the cold and the Sunday night start time, there were plenty of Cardinals fans in attendance; you could hear them loudly in the early innings when St. Louis took that 3-0 lead.)

Give the Cubs credit; they didn't roll over easily, even after the first two men were out in the bottom of the ninth. Just as the Cubs had for the Cardinals early in the game, St. Louis closer Trevor Rosenthal issued a two-out walk, this one to Emilio Bonifacio. Valbuena doubled him in to make it 5-4, and up comes Anthony Rizzo, off to a good start and perhaps beginning to establish himself as an elite player in this league.

It didn't happen for him Sunday night. Rizzo grounded to first base and the Cubs had a tough loss, 5-4 to the Cardinals. Go figure, right? The Cubs win the two games they figured to lose in this series, and lose the one game most of us thought they had a good chance of winning.

Still, as I said... entertaining, mostly well-played, and some positives even after a game that dropped the Cubs' mark in one-run affairs to 2-6.

On a very chilly evening, the Cubs again did a terrific job on the throwback uniforms. Although the Cubs did not wear uniform numbers in 1929 (that didn't start until 1932), they did a nice job of using a numbering style from around that era. Both teams looked really nice, especially with everyone wearing high socks.

The announced crowd of 30,023 was, as far as I can tell, the smallest paid crowd for a Cubs/Cardinals Sunday game at Wrigley since September 20, 1992.

You all likely saw ESPN's crew Sunday night -- often. Here's a view of their broadcast perch in the right-field party patio area: 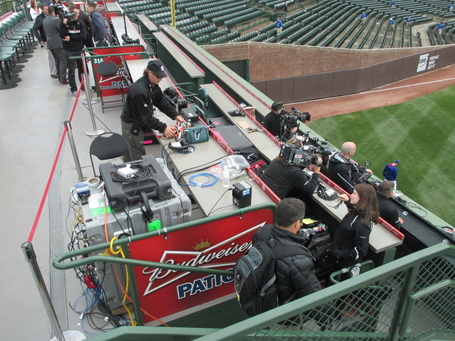 And now, it's the White Sox, for four games, two at Wrigley, then two at the Cell. BCB's Russ La Croix will have a series preview later this morning; Monday night's game will feature Jeff Samardzija against Jose Quintana.