Apparently the advice to Edwin Jackson -- "don't throw Andrew McCutchen a strike" -- was not followed.

Share All sharing options for: Cubs Heroes and Goats: Game 61

In the interest of full disclosure, I did not see any of this game as I was a participant in my youngest daughter's dance recital and will be for each of the next two nights. Yes, you did read that correctly: participant. It was a fun time, though. And nothing beats making your kids smile, especially since it won't be long before they think I'm a dork and eyeroll me for everything that I do.

Graphs for Game 61 (courtesy of Fangraphs): 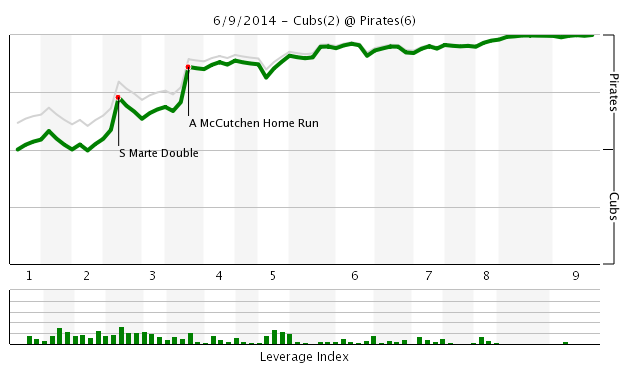 Writer's Note: The nightly selections of the three Heroes and three Goats are based solely on the top three and bottom three WPA scores for the game. The selections are not based on my subjective opinion.

Villanueva gets what may be the least-deserved Hero podium spot of the season, and Jackson goes back to review his game note (singular, not plural) to see what went wrong.