BCB's Danny Rockett brought four French people to a Cubs game. They knew nothing about baseball.

The first time I tried to explain baseball to a foreigner who knew nothing about the game was on Opening Day at Yankee Stadium with my ex-wife's cousin Lucas from Buenos Aires. My intermediate Spanglish gets confidently worse with each beer, but luckily, bilingual Yankee fans helped explain the concept of the on-deck circle. Lucas had wondered whether the on-deck hitter could run up and hit the ball or be involved in the play somehow. While it certainly would be entertaining to watch a bat wielding player run into the field to try and disrupt the play, I'm doubtful that rule will be implemented into the game. But it would be fun to see!

Again last year at Wrigley, I attended a game with Valéry Warnotte, a French theatre director. He was thoroughly enchanted with the sights, sounds, and smells of baseball, and specifically Wrigley Field. My favorite moment of that game was the seventh-inning stretch when I turned to Valery and said, "OK, now we're all going to stand up and sing a song together!" Valéry was bewildered and wondered why we would do such a thing. I told him, "I have no idea, but It's tradition, just get up and do it." We then spent the rest of the game talking about French literary history which is as far out of my ken as baseball is to him.

But Valéry had such a great time that when he returned to Chicago this year to direct "Regarding the Just" (currently playing at the Trapdoor Theatre -- it's great and you all should go see it), he insisted that when his Parisian friends Julie and Alexis came to see the play on opening night, that we should catch a ball game the next day along with visiting actor Pascal Collin. He wanted to show his French countrymen the beauty that is Wrigley Field and the strange game of baseball. Valéry also thinks himself a good luck charm, as the game I took him to last year was one of the Cubs' 66 wins.

So we all met up last Friday to watch the Cubs and Marlins go at it, in the first of six summer Friday 3:05 games. To get into the spirit of it all, they all bought Cubs hats! 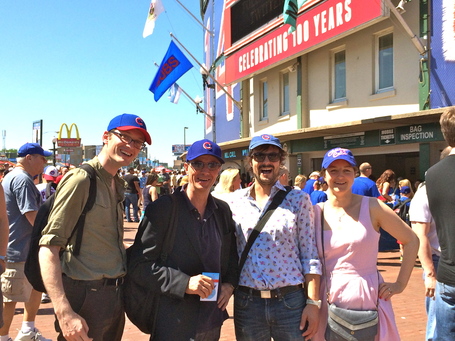 Not all of them stood for the national anthem, which I'm not sure was a protest or simply not knowing what was happening, but I couldn't even be mad about it or explain, because a vendor poured our beers during a classic Wayne Messmer rendition, and I spent the entire song handing out cups of Goose Island and explaining how $40 isn't enough for five beers. It should be, but it isn't. The vendor jokingly chastised the French for being cheap at which point I handed the guy a fiver and told him to come back in an inning. Anthem over, beer in hand, It was time to watch some baseball.

Pascal was the most interested in learning the rules of the game. My French is nonexistent, but as plays unfolded and he asked a few questions I could tell he was getting how the basics of the game work. Force outs, line drives, foul tips, sacrifice flies... they all need explaining to someone who never watched a game. And in the fifth inning Pascal helped me out as the Cubs scored a run.

I have no idea what he said, but I think there's a new Cubs fan on the planet. I also know that the Cubs went into the ninth inning winning 3-0, only to blow the lead. Our crew stood at the top of Terrace Reserved to witness the meltdown. 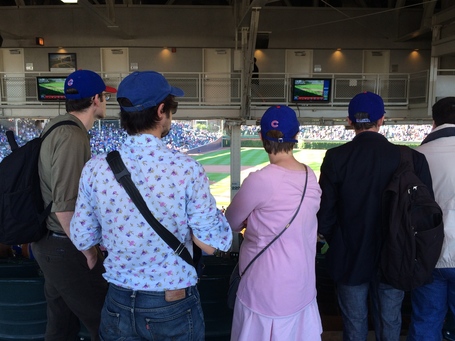 Welcome to being a Cubs fan, French people!

They left the game for the theatre and fortunately Anthony Rizzo saved the day with a walk off two-run homer in the 13th. Valéry also took credit for the "W" later on that evening. He had been at the game and the Cubs won. It's as simple as that. I told him if that were truly the case, every Cubs fan in Chicago would offer him season tickets.

So Major League Baseball can open their season in some far-flung land. The World Baseball Classic will continue to spread our beloved pastime around the globe in alternate years. And I'll do my part by bringing foreigners to Cubs games.