After an injury setback in spring training, it looks as if Jake Arrieta might have finally become the starter the Cubs hoped they had when they traded for him a year ago.

Now that was a ballgame!

That's exactly the kind of game we want to see from the Cubs all the time. Excellent starting pitching. Solid relief work. And just enough offense to win the game, 2-1 over the Phillies.

Jake Arrieta threw the best game of his 2014 season and pitched seven innings as a Cub for just the third time. Truth be told, I think I'd have let him at least start the eighth inning, because he was really rolling. 100 pitches, 64 strikes, just two singles and a walk allowed. The seven shutout innings give him a scoreless streak that stands at 16⅔ innings and lowered his ERA to 2.09. He's still about three starts from having enough innings to qualify, though.

So Pedro Strop was called on for setup work; he threw a scoreless inning and then Neil Ramirez got the chance to close it out.

Ramirez gave up a double to Jimmy Rollins, and this was important to Phillies fans not only because it gave them a chance in the game, but because Rollins' hit tied him with Mike Schmidt for the most all-time by the Phillies, 2,234.

Ramirez retired the next two hitters and then it appeared -- at least to this TV viewer's eye -- that he had struck out Marlon Byrd on a 97 mile per hour fastball. The TV box showed the pitch just outside the zone, but I've seen pitches like that called strikes before. Instead of being strike three, it was ball four, putting the winning run on base. Ramirez then got Carlos Ruiz on a perfectly-thrown curveball to end it.

Starlin Castro had provided all the offense the Cubs needed -- all they got, in fact -- with a two-run homer after Anthony Rizzo had walked in the fourth inning. Phillies starter Roberto Hernandez plunked Castro the next time he came to bat in the sixth and was immediately tossed. Phillies manager Ryne Sandberg came out to argue. I'm not a great lipreader but you could clearly see Ryno say, "No way! No way!" The argument went on in mostly-civilized fashion until pretty much everyone could see him say, "That's bullshit!", upon which he was immediately tossed (and mocked plate umpire Mark Ripperger's ejection motion, too, which was pretty funny).

A nicely-played game, keyed by Cubs who should be a big part of this team's future. Well-done. One thing to keep an eye on: there was a TV shot of Hector Rondon in the dugout -- not even in the bullpen, available for work. Turns out there might be cause for concern about Rondon:

That's worrisome, but at least the Cubs now appear to have a pitcher -- Ramirez -- who could take over the closer role if Rondon has to hit the disabled list.

Now, a few words about the 1964 throwback uniforms worn by both teams Friday night.

The Cubs' uniforms were awesome. I really like this look and would love to see the Cubs adopt this as their primary road gray. The gray was a bit darker than the current official road gray, and I like that shade. The "CHICAGO" on the front matched perfectly the way it looked on the uniforms of the era evoked, as you can see from this 1962 photo of Lou Brock (the uniforms and numbering style would have been exactly the same in 1964): 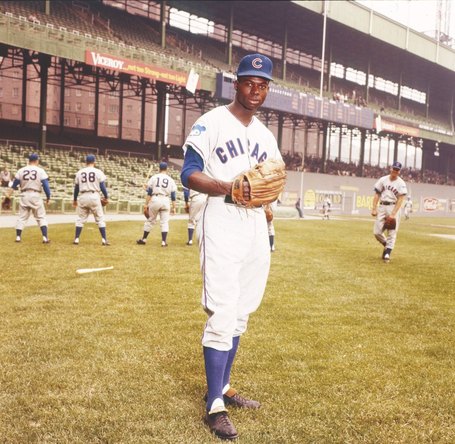 You can see that the numbering font, size and style used on Friday night's throwbacks exactly matched what the Cubs used on their road uniforms in that era (this style of road uniform and numbering was used from 1958-1968). I like the blue numbers (with a thin red outline) better than the red ones used now, and the piping on the collar and sleeves, as well as the uniform pants, is a classy look. (Note: you can click on all the images in this post to open a larger version in a new browser window.)

The Phillies, though, blew it when coming to matching their own historic uniform style!

Basically, the 1964 Phillies look is identical to their current home uniform, except that the current uniform has blue stars over the "i"s in "Phillies"; their 1964 version had red stars.

But the 1964 Phillies -- and all Phillies uniforms from 1950-1969 -- had ginormous numbers on the back, filling almost the entire back of the jersey, and much higher on the back than the shirts they wore Friday evening. Like this: 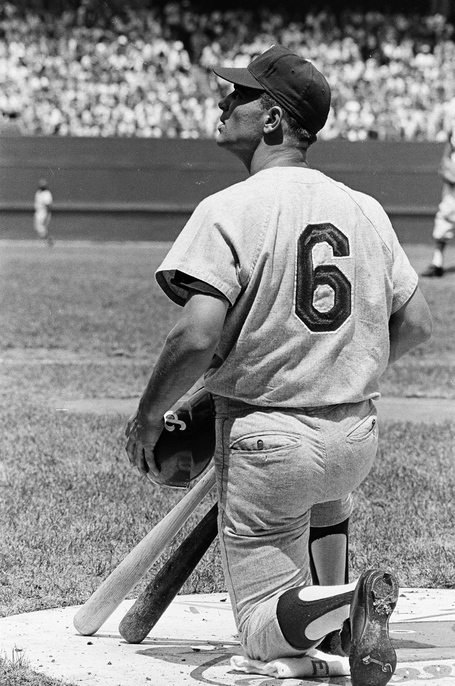 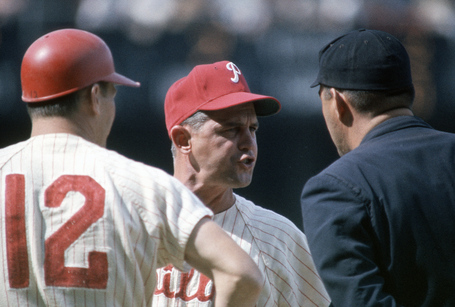 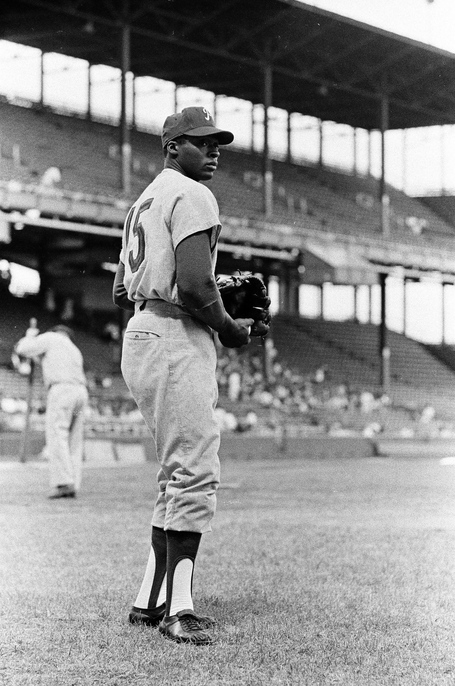 Now look at the numbering style (especially for the "1", the "2" and the "5") used Friday night by the Phillies: 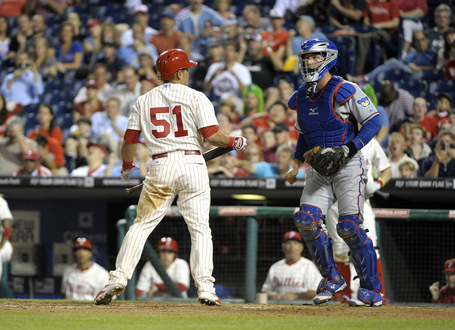 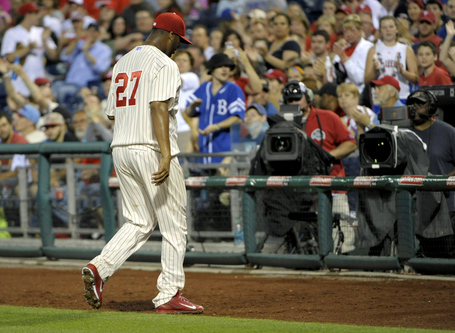 I've given the Cubs' marketing department low marks for some of the things they've gotten wrong during the 100th-anniversary celebration of Wrigley Field. But one of the things they've done absolutely perfectly is the throwback uniforms -- helped in getting the details right, no doubt, by historian Ed Hartig. The Phillies could have used Ed's expertise Friday night -- you can see they got the numbering style on their own jerseys completely wrong, while getting it right on the shirts of their opponents!

Anyway, nice game and nice uniforms (at least for the Cubs). The teams will go at it again Saturday afternoon, at an unusual time, 2 p.m. CT. Edwin Jackson will face David Buchanan; the game preview will post at 12:30 p.m. CT.