The Wrigley Field Ivy And The New Left-Field Wall

If you're wondering about the ivy looking kind of sparse on the left-field wall at Wrigley Field, here's an explanation, with photos.

Share All sharing options for: The Wrigley Field Ivy And The New Left-Field Wall

Many of you have likely noticed that the ivy on the left-field bleacher wall at Wrigley Field isn't as full as it used to be.

The reason for this is that section of the wall was completely rebuilt last offseason. It had to be -- after 76 years with ivy climbing up, the original wall was beginning to crumble. The team had to carefully remove the ivy last November, by which time all the leaves had fallen, and place it on the field, covered, while they demolished the original wall and rebuilt it with new bricks. This isn't officially part of the Wrigley renovation project, but essential maintenance work that has to be done to keep the 100-year-old ballpark in good working over.

Naturally, we had the worst winter in four decades. They still finished construction in time for Opening Day and replaced the ivy, attaching it to the wall. It didn't start growing in until mid-May due to the horrific winter, leaving some of us to wonder: would it grow in at all? And if so, how would it look?

With the warmer weather we've had recently, the ivy did grow in, but there were some spots where it didn't grow back completely. In addition to that, it looked as if it wasn't as high on the wall as it had been. I took the opportunity of being on the field for season-ticket holder family day this past Friday to take some photos to share with you.

To give you a comparison point, here's a photo of the left-field wall I took when I was on the field during Wrigley Neighbors Day in October 2010. This is essentially how it would have looked at the end of the 2013 season before they started construction on the new wall (you can click on any of the photos below to open larger versions in new browser windows or tabs): 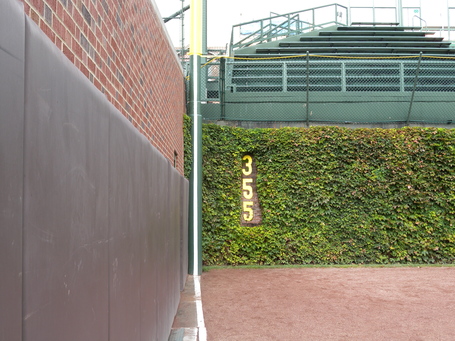 Now, here's the photo from the top of this post so you can compare easily (the yellow "ropes" are actually electrical power extension cords running power for the kids bouncy things they had on the field): 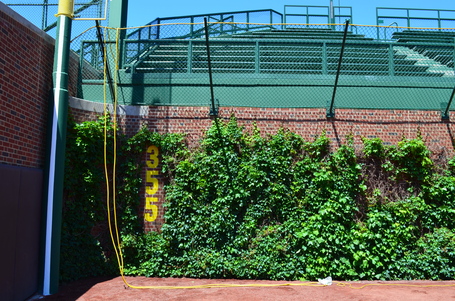 The ivy clearly doesn't come up as high as it did four years ago, and there are bare spots. But there are also ivy tendrils reaching out from the newly-green section, growing new shoots up higher: 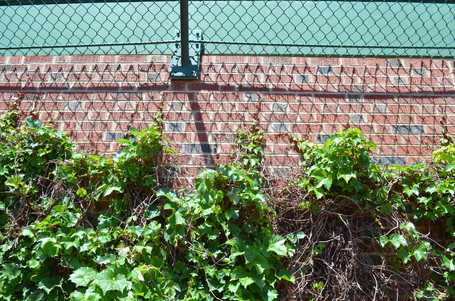 Here you can see a comparison between the ivy on the new wall, and on the old left-field wall immediately adjacent: 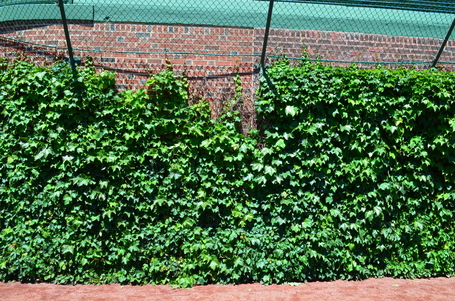 And here's a closer-up view of the same area, where you can clearly see the difference between the new brick (on the left half of the photo) and the old (at right): 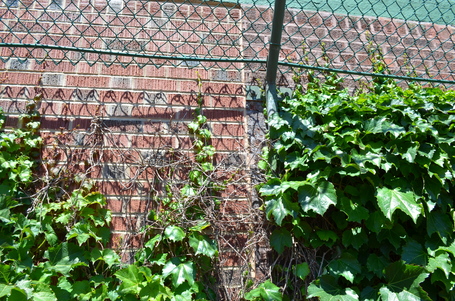 So eventually, probably within five years or so if not a bit sooner, the ivy will cover the entire wall again. Anyway, just something I thought would be of interest; things are always changing at Wrigley Field and eventually, they will have to replace the entire outfield wall. I expect another section (maybe the right-field corner) will be done next winter.