The Sordid Travels Of A Cubs Fan: Miami Marlins

BCB's Danny Rockett continues his "Sordid Travels" series with a trip to the Sunshine State and Marlins Park.

Share All sharing options for: The Sordid Travels Of A Cubs Fan: Miami Marlins

If you're a fan of delicious Latin food, sexy people, and ugly ballparks, then Miami and Marlins park is the place for you. My girlfriend Nicole gave me this trip as a 40th birthday present (probably the best present I ever received), and she joined me for three sun and fun filled days this week in Miami.

First off, a little bit about getting to the ballpark. Unlike other cities, which often provide shuttle service or decent public transportation options from downtown or other heavily traveled touristy areas, Marlins Park is only accessible from Miami Beach by car. Sure, you could take two buses, a metro line, and a shuttle there, but spending four hours on a Miami bus vs. 40 minutes in a car roundtrip is a no-brainer when that extra three hours could be spent on the beach or sipping Prosecco as sexy women stroll by in bikinis. And even with a car, parking can still be quite the adventure. Locals rent their yards, garages, and driveways to fans for an average price of $10 -- a good deal since it costs $15 to park in the Marlins covered lot. Nicole and I drove around looking for the cutest old couple to give our ten bucks, and after a couple loops around the block, settled on these two. 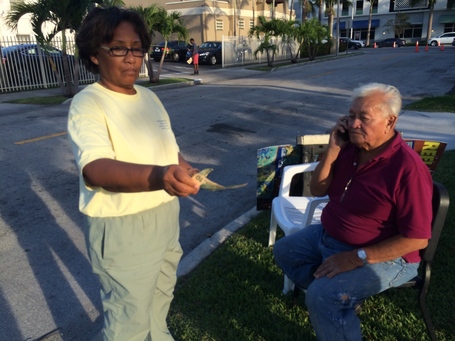 Fluency in Spanish directions is a must if you are going to park this way, as the rapid fire instructions detailing their yard parking scheme were not easy to follow. Luckily, my level three Rosetta Stone Spanish guided us to a nice spot right next to the couple's patio. 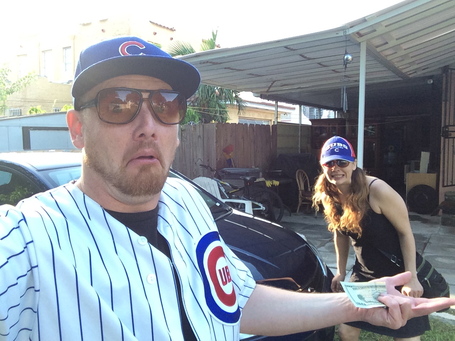 With our uninsured rental car safely in the hands of strangers, we headed to Marlins Park, but of course first I had to be frisked and wanded. 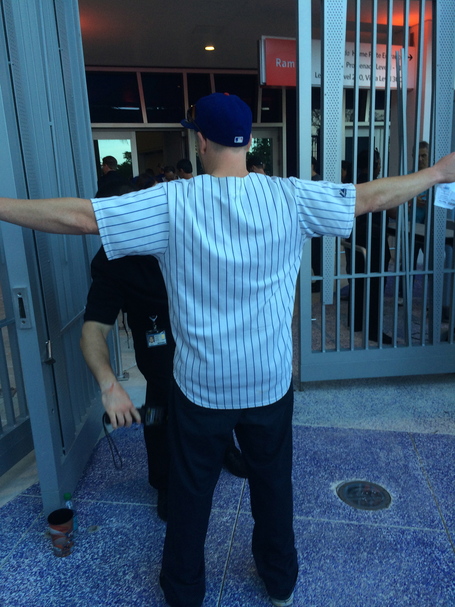 Luckily, I left my hand grenades and cutlass in my other pants.

OK… OK… I said the park is ugly, and it is, but not from the outside. From the outside, it's an impressive structure in what appears to me to be a terrible neighborhood. But Marlins Park really could be any large building. An airport, a convention center, corporate office buildings. Anything! Nothing about the outside of Marlins Park screams Miami or baseball. The vibe might be different if there were baseball fans around, but there weren't. The announced attendance of 19,170 was nowhere near the actual attendance. No one. I repeat: Not one living soul inhabited the upper deck. I'm not great at estimations, but I'd say there were about 10,000 there. Cubs fans outnumbered Marlins fans easily, especially by the end of the game, where just a few thousand of us stayed to watch Travis Wood knock in Junior Lake with a double in the 13th. But I'm getting ahead of myself…Marlins Park is ugly. 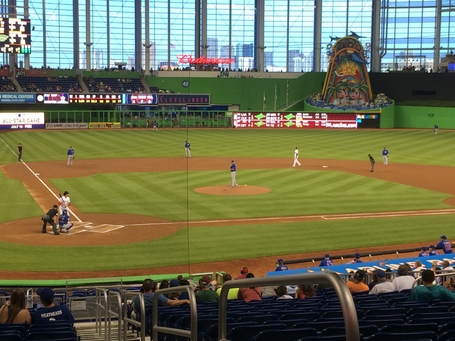 A headache-inducing near neon green covers the walls, broken up only by randomly placed video boards and ads in left and right field. 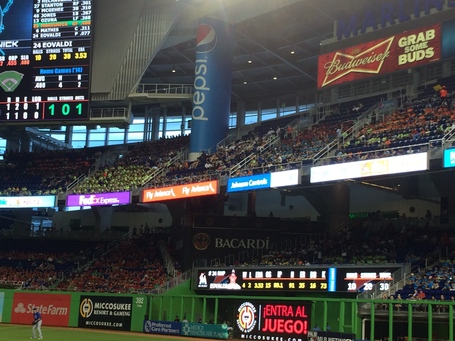 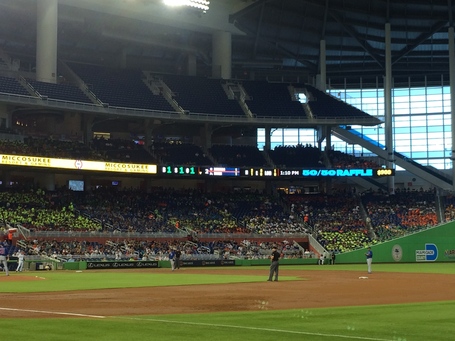 And then there's this thing…. 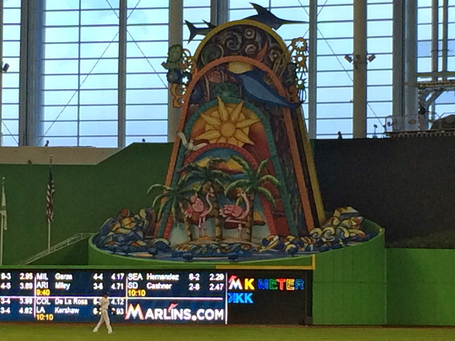 I dislike this mechanical sculpture because it represents a Marlins home run, just like I hate Bernie the Brewers slide, and the Mets' stupid apple. But from a purely artistic point of view, it's at best an eyesore and at worst a nausea-inducing pile of neon vomit.

In fact, just about everything in this park is ridiculously dumb and unattractive. For example, the Bobblehead Museum. 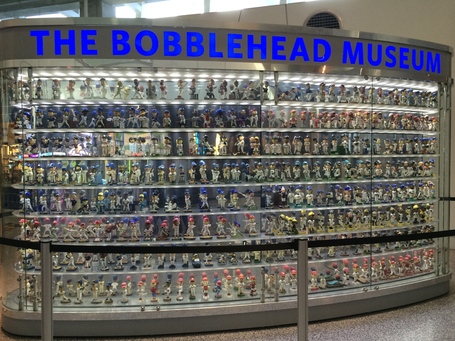 Or for you Spanish Speakers…. 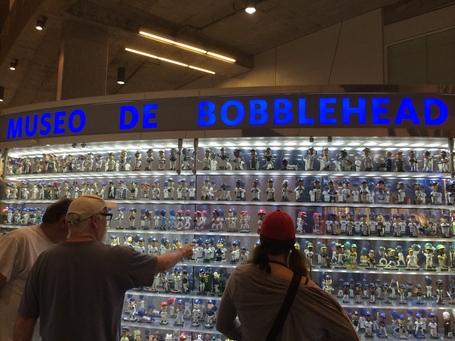 In case you don't have time to peruse the many rows this museum has to offer, you can search for your favorite player on a computer! 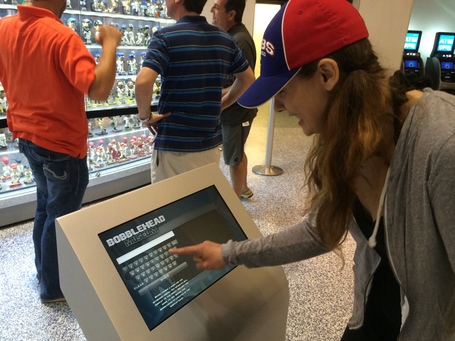 Bobbleheads are inherently silly. They're supposed to be. But a computer program built to find  a Bobblehead…. well… that's just plain ridiculous.

What else is ridiculous are the beer prices! More expensive than Wrigley! (by 50 cents or so). At least they have a decent selection. 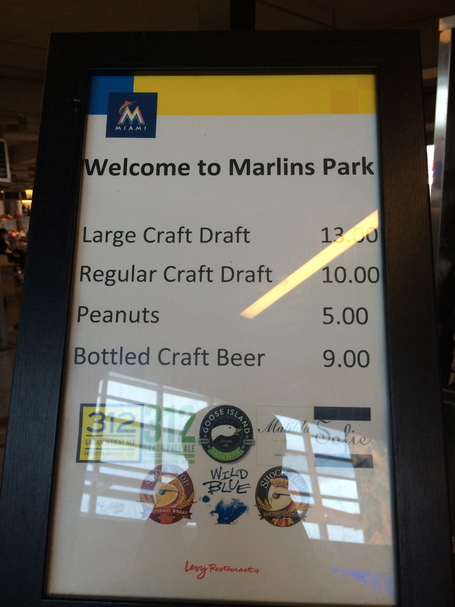 Large Drafts are 24 ounces and Regulars are 16 ounces. Your best bet however is a 12-ounce Matilda Bottle for $9 when considering alcohol content to quantity ratio and flavor. The Captain Morgan Club at Wrigley Field carries Matilda for a few bucks more at (one of the biggest rip offs at Wrigley). No wonder no one comes to these games at Marlins Park. No public transport and expensive beer = No fans. Even with a decent team….

What is fun at Marlins Park, though also ridiculous, is the Clevelander Club in left field which features a swimming pool. (shoulda brought my suit). You can enter the Clevelander either with a $20 standing room ticket, a $40 general admission ticket, or from anywhere in the stadium after the 7th inning. They continued to serve alcohol through the 13th inning, just as in the Captain Morgan Club at Wrigley. 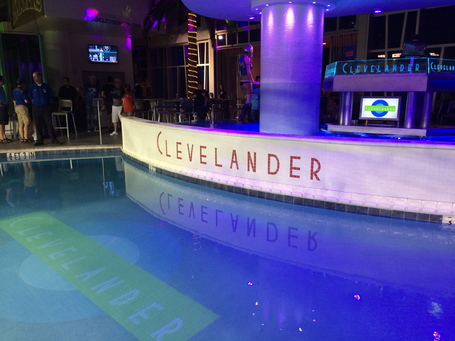 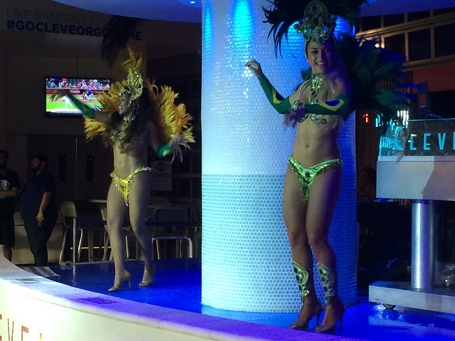 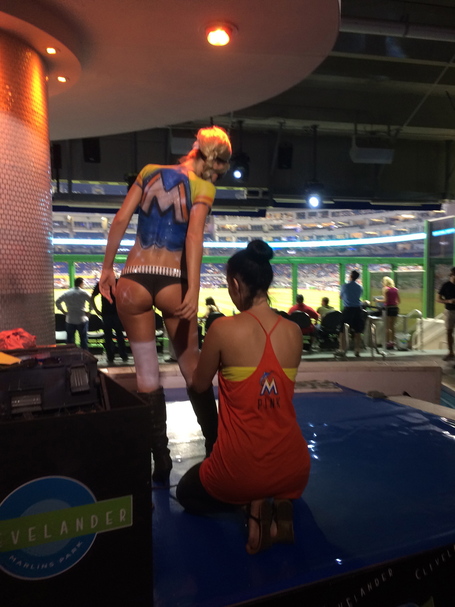 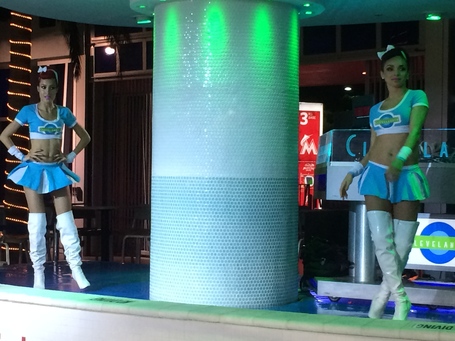 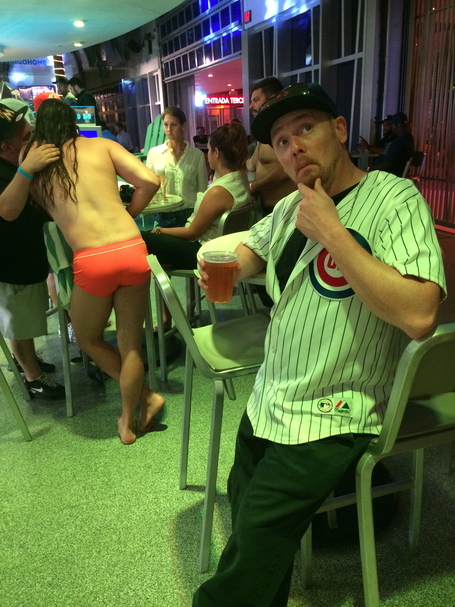 These Cubs fans were fun to hang with. They won the 50/50 raffle! 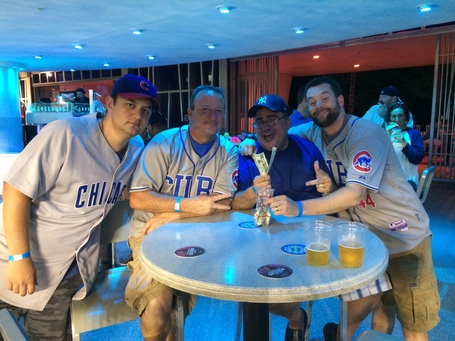 And the Clevelander sported one of the best post game fights I've seen in awhile...

The Cubs won game one (thus the fight) and we headed back to our car quite late. Our parking attendants were apparently already asleep…. 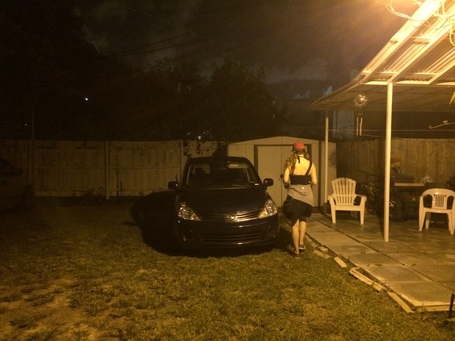 We skipped game two of the series to enjoy the beach. Lucky us, as it was the only loss. But we headed back on Wednesday for a day game.

This time we parked for $8 next to an apartment building. 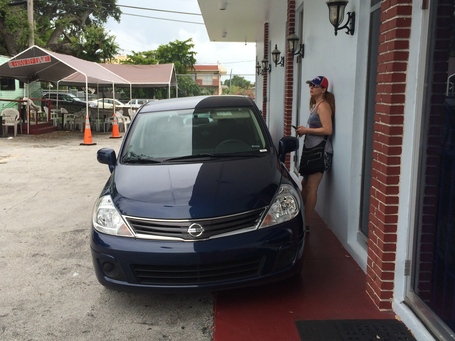 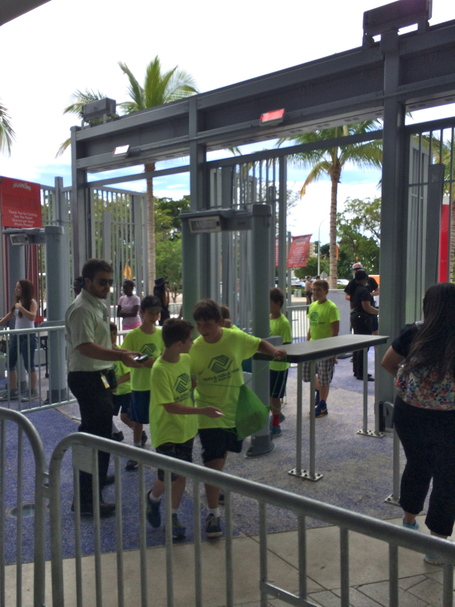 And enjoyed $20 seats, three rows from the field! 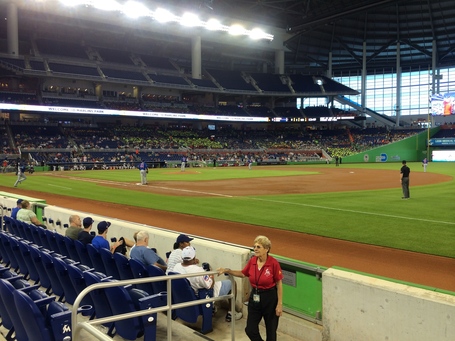 We had our own private hall bathrooms! Not a trough in sight! 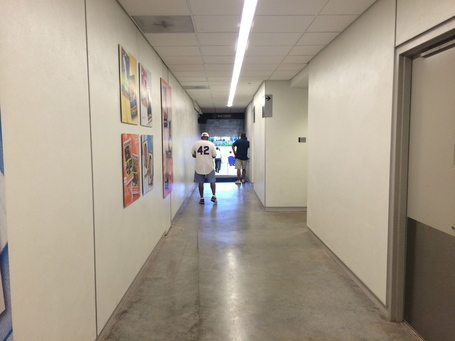 This guy sold us beer... His name is Rocket Man too! My brother from another mother…. 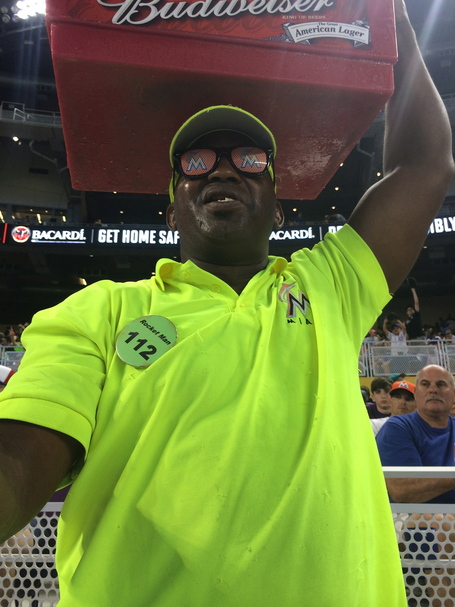 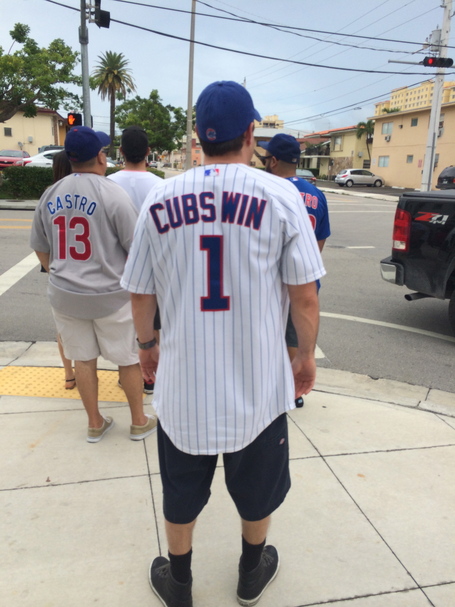 So, as I sit here in the airport after two canceled flights and a heavy rain coming down in sheets, threatening to cancel a third flight and strand me here in Miami, I just have to say I have zero interest in going to Marlins Park ever again -- which pretty much puts me in the same boat as most people who live in Miami. I will however, come back to this incredible beach city as often as I can. Amazing food. Great bars. And In my estimation, it's the sexiest city in the USA. Both Nicole and I agree. If you like attractive human beings and bathwater oceans, you'll love Miami. The stadium… not so much.

And now…. your moment of Zen….