A Cubs Ticket For Peanuts... Literally

Share All sharing options for: A Cubs Ticket For Peanuts... Literally

I will always remember Wednesday, June 25 as the day I traded an Outfield Upper Deck Reserved ticket for a bag of peanuts. My friend Ann, a season ticket holder who I met in Las Vegas during Spring Training regularly gives me her tickets to obtain door give-a-ways at Wrigley such as bobbleheads and soft sided coolers. She also gives me tickets when she can't sell her seats.

Such was the case this past Monday when I received a text asking if I wanted her seats for Tuesday through Thursday. I already had tickets for Tuesday, but offered to sell the seats outside the ballpark for whatever I could get, and then let it ride on the 50/50 raffle. I got $10 from a scalper, and then went in on the 50/50 with Ann and my girlfriend. We bought 60 numbers. We didn't win. 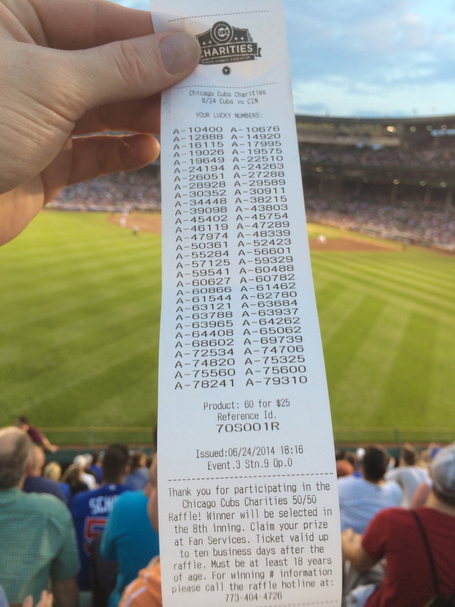 Wednesday, I planned to use only one ticket as all of my friends were busy. Most scalpers don't want just one seat, so I approached one of the regular peanut and water hustlers out side of the left-field gate and asked if he'd trade me a bag of peanuts for a ticket. He recognized me as a regular customer but still winced at the idea and said "What am I gonna do with a single ticket? I need two!" I replied, "Then trade me half a bag of peanuts." He laughed at my joke, shoved a bag of peanuts in my hand, and took the ticket.

I've traded Ann's ticket for an unofficial scorecard from an independent vendor, and also given a few away to homeless hustlers. My friends have also been treated to tons of free games thanks to Ann. But trading a Cubs ticket for a bag of peanuts? Well… that just seems sad.

Sure, peanuts are mentioned in the iconic song "Take Me Out to the Ballgame," but "peanuts" is also old-fashioned slang for things that won't cost you much. As in, "Why not come out with me to the Cubs game? It costs peanuts!"

The reason for this anecdote is because I'm starting to feel really bad for season-ticket holders who regularly take a bath on the face value of their tickets. Seats on Stubhub regularly list for 25 percent of face value, and at times are simply unsellable. The announced attendance of 28,207 on Wednesday was nowhere near the actual attendance, and thousands of seats went unsold leaving season-ticket holders holding the bag and taking the loss. There were many reasons for the horrible attendance on Wednesday. The weather was lousy, the 6 p.m. start is kinda weird, and the Cubs are in last place. But for seats to be worth literally peanuts seems like a new low.

This of course benefits me greatly as there is no possible way I could afford to go to all these games on a freelance writer and musician salary, but I still feel a little guilty when I buy a $40 ticket for 10 bucks. So to all the season-ticket holders I've fleeced: I'm sorry but thank you.

So what's the solution to the awful attendance?

Well, for a game like Wednesday's? It should have been played at 1:20, and it should have been packed with kids from summer camps dressed in identical T-shirts. Give the camps a deal for $5 tickets or even free tickets. Kids can be annoying, but they cheer for anything and electrify the ballpark. I've noticed that on Sundays when more families are in attendance to run the bases after the game, the crowd seems more lively. Parents cheer with their kids and then they buy mountains of kiddie sized fan gear and ice cream in in plastic helmets. I've even gotten up and done the sprinkler dance with my sister and her three kids during a YMCA soundtracked pitching change! Baseball's more fun with kids!

I know Wrigley hosts summer camp days from time to time, but there should be more of them during these down years. The Cubs could also be making fans for the future with family days as well (which they used to do). It was some deal like four tickets, four hotdogs and four sodas for $40. A great bargain! And affordable for a family of modest means.

The Cubs have the third highest average ticket prices of any major-league team behind the Red Sox and Yankees. They have also lost over 100 games more than they've won in the last few seasons. They've gotten rid of players any casual fan has ever heard of, and yet they still charge outlandishly for everything from beer to horribly conceived decade dogs. The ticket prices are the worst of it though. Because it's a slap in the face to all of the season-ticket holders. As I see it, the Cubs are asking you loyal fans to take the loss on the tickets, while they get to announce an average attendance of just over 32,000. It's not fair. The Cubs should be taking less for the tickets. Not the STH's.

Adding insult to injury, the Cubs have even made it harder to sell tickets on Stubhub, taking tickets off sale six hours before game time. They used to allow sales up to two hours before the first pitch. Some other teams and other sports allow you to buy tickets all the way through the game. How can this be justified?

The Cubs have to do something about attendance now. Lower prices for season-ticket holders. Family deals. Two for one Tuesdays. Ladies night. College night. Free tickets for summer camps and schools. Anything to get people into the ballpark!