Nationals 7, Cubs 2: The Shark's All Wet

Share All sharing options for: Nationals 7, Cubs 2: The Shark's All Wet

The biggest -- really, the only -- question from the Cubs' 7-2 loss to the Nationals in Game 2 of their split doubleheader Saturday is: "Should Jeff Samardzija have been left in to pitch after the rain delay?"

After the rain stopped and fans returned to the stands, I saw Samardzija and pitching coach Chris Bosio have a long conversation in the outfield. You can imagine how that one went. The delay, caused by a torrential downpour just a couple of minutes after Luis Valbuena tied the game with a two-run homer in the bottom of the fourth inning, lasted 55 minutes, not inordinately long.

Samardzija, who had been touched for a run on an Adam LaRoche homer in the second and another on a sacrifice fly following a double and a bunt in the third, didn't appear overly taxed as he completed a second set of bullpen warmup tosses.

Then the game resumed, and Wilson Ramos sent Shark's first pitch into the bleachers in left-center for a home run. Not good! Shark did recover to strike out two of the next three hitters, sandwiched around Nate McLouth reaching base when he was hit by a pitch.

Did McLouth really get hit, or did he do a good acting job? Replays were inconclusive, though even the Fox announcers thought the ball might have hit the dirt instead of McLouth's foot.

Even so, two out, runner on first, one-run game. Not too bad a situation, right?

Three singles and an Anthony Rizzo error later, the Cubs trailed 6-2. I'm not going to completely blame Samardzija for those runs, because all three singles bounced just out of the reach of Cubs fielders. Shark was likely making his pitches and getting hitters to put the ball on the ground -- the balls just didn't quite get to the right places.

Nevertheless, with the unusual off day today and not playing again until Monday night in Boston and an eight-man bullpen that wasn't too overtaxed in the first game, why not turn to the pen for help? I can see arguments on both sides. What do you think about Shark's return to the game after the delay?

You could, if you looked, see Nats rookie Blake Treinen in the same discussion with his pitching coach in right field after the rain stopped. The Nats let Treinen throw the fifth inning, in which he allowed a walk to pinch-hitter Mike Olt, then lifted him for pinch-hitter Scott Hairston. The Nats bullpen finished up the game uneventfully. The Cubs did manage a pair of hits in the sixth off Xavier Cedeno, but did not score and Ross Detwiler threw three perfect innings for his first career save. It was just the seventh save this year in all of major-league baseball of three or more innings.

The crowds got more rowdy as the afternoon and evening dragged on into a wet, sticky, humid mess; I heard of many ejections from the bleachers, quite a number of them for underage drinking on fake IDs. The storm didn't help those matters any; here's what it looked like approaching Wrigley from the south, about five minutes before the skies opened up: 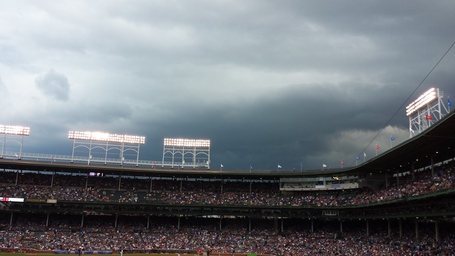 So the Cubs wind up with a split of the four-game set and a 4-6 record on their homestand. The season isn't quite half over; Saturday's second game was the 80th game of the year, with 82 to go, and the team's 34-46 record puts them on pace for a 93-loss season, which would be the Cubs' fourth straight of 90 or more defeats.

Lest you think I'm being too negative, there are certainly positives about this year, particularly the good seasons at the plate from Rizzo (though he went 0-for-7 in the doubleheader) and Starlin Castro, who had two more hits Saturday evening, including a double, which was his 36th extra-base hit of the year. Castro is thus on pace for (about) 73 XBH; the last Cub to have that many was Derrek Lee, who had 73 in 2009, and there have been just 10 seasons since 1990 in which a Cub had 73 or more XBH. I'll have a more complete look at the Cubs' first half at the All-Star break.

Stick around BCB on this unusual midseason Sunday off day. We'll have plenty here including the Heroes & Goats from both Saturday games, some more trade talk, as well as other features both today and Monday before the Cubs begin a 10-game road trip in Boston. Jake Arrieta will take the mound Monday evening at Fenway Park against the Red Sox' Jake Peavy.