Concessions Of A Cubs Fan: The Buffalo Wing Dog

BCB's Danny Rockett bought a scalped seat and ate a Buffalo Wing Dog so you don't have to...

Share All sharing options for: Concessions Of A Cubs Fan: The Buffalo Wing Dog

The Cubs celebrated the 1960s at this past home stand with bobbleheads, throwback uniforms, and the Buffalo Wing Dog. People have been cooking chicken in spicy sauce for thousands of years, but the Anchor Bar and Restaurant in Buffalo, New York lays claim to slapping its city's name on the recipe in the 1960s. You can read the mundane story here.

After my last experience with The TV Dinner Dog, I was by no means eager to return to the Decade Dog stand. My foray into ballpark food reviews is poised to carve a hole in my Blue Cross Blue Shield Bronze Plan deductible, as my digestive track seems in the same shambles as the Cubs starting rotation. But with a belly full of Prilosec antacid, I went to Wrigley Field Saturday in search of a scalped ticket and a hot dog that tastes like buffalo wings.

The problem with procuring a decade dog this past Saturday in particular, was that the cover charge for the restaurant (Wrigley Field) hovered around $30 on StubHub for the game. Having just blown a bunch of cash drowning my Cubs fan sorrows on the extensive beer selection at Great American Ballpark in Cincinnati, I was feeling kinda broke. Normally, I would have saved the cash for Saturday's game and watched on TV, but how can I miss a moment of the Party of the Century and a chance to review the $7 Buffalo Wing Dog? I would have gone Sunday when tickets were much cheaper, but alas, I had a gig singing dirty XXX-Mas carols at a "Christmas in July" party on Sunday. Ahh, show biz.

I biked down to Wrigley with $15 in "fives" and "singles", plus an extra hidden "twenty" that the scalpers couldn't see. The first inning saw prices of $40 minimum for Terrace Reserved and my meager  offer of $10 was laughed away and abandoned. After the first inning, the price was $30 from another scalper for an Upper Deck Reserved Outfield Seat. In the middle of the second inning a scalper on the corner of Clark and Addison named Arnufo offered me a $30 Box Seat because he liked my Mexico shirt, which I wore to not appear too big of a Cubs fan, but I stuck to my $10 price point and walked away.

Even though I wasn't inside Wrigley yet, the atmosphere around the park is always festive. I wasn't the only one without a ticket. 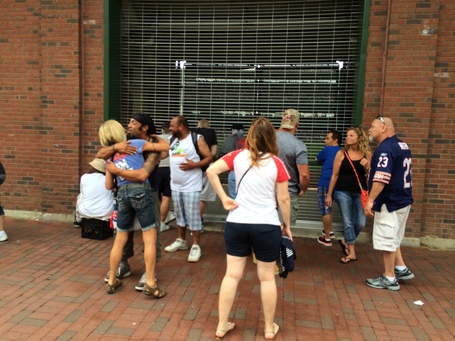 The Outfield Gate is actually not a bad place to watch the game. You can see the entire infield and right field through green mesh. 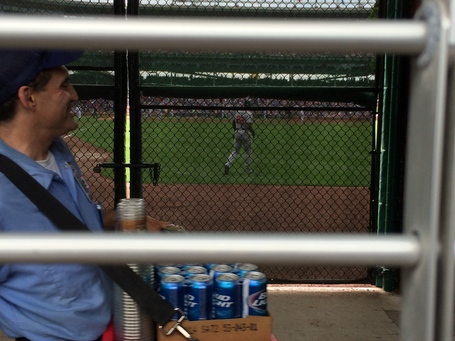 And if you're anything like the people I was watching the game here with, you can also harass passersby and drink alcohol from a paper bag! A much cheaper buzz than inside!

One thing you can't do from the outfield gate however, is buy and eat a Buffalo Wing Dog.

I lapped around Wrigley a few times and the scalped ticket market seemed to have more buyers than sellers. In other words, the scalpers were even out of tickets. Arnufo was gone, and it seemed affordable entry to Wrigley field was out of my reach.

I bumped into a group of Cubs fans who thought that with the morning's monsoon, a cheap ticket outside the park would be easy to come by. I told them I had thought so too, but the Cubs just happened to be a tough ticket that day. I snapped their photo and they went off to drink and watch the game at a Wrigleyville tavern. 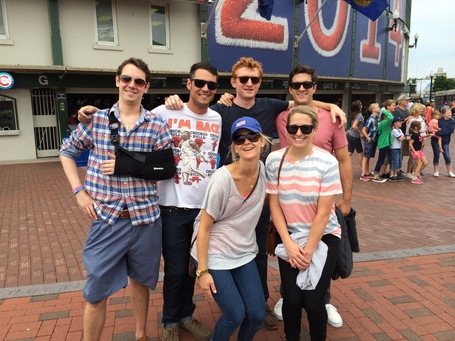 I was beginning to think I was going to either have a fan inside buy me the Buffalo Wing Dog and hand it through the front turnstile, or get in like this kid! 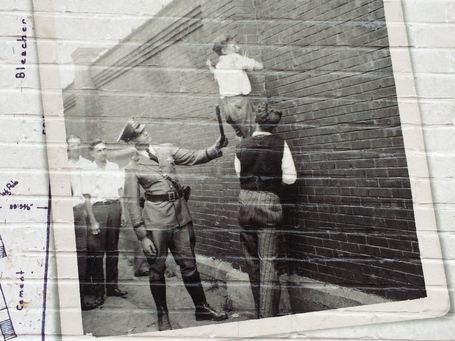 But just then...the score went from this... 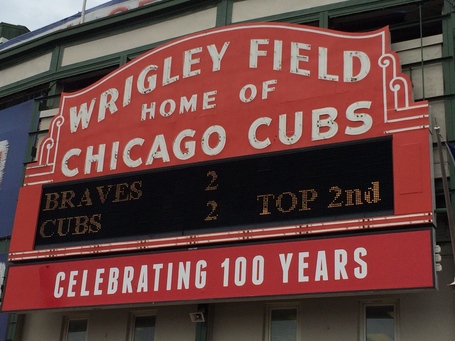 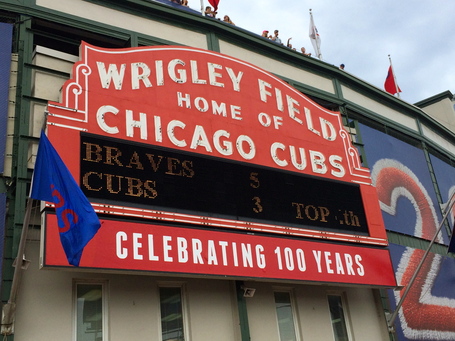 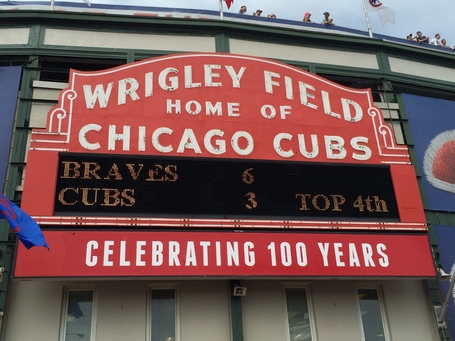 And then I saw this guy! 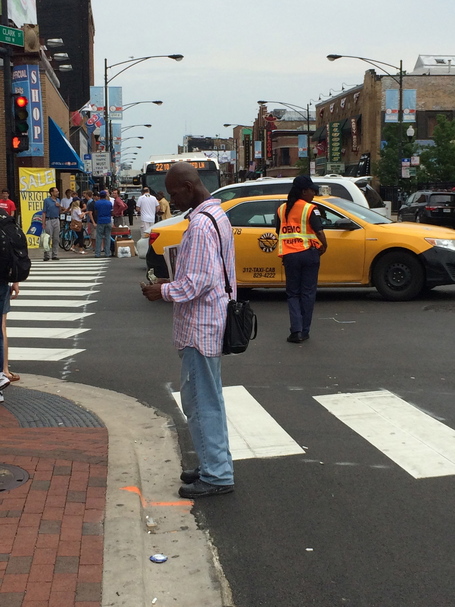 So to take advantage of the game being stalled with a Braves rally in the fourth and a three-run Cubs deficit, I chased this smartly dressed gentleman a quarter of a block and haggled his initial $20 asking price for a Terrace Reserved Infield Box seat down to $15.

Here's what a $15 Cubs ticket looks like on a July Saturday in the top of the fourth inning with the Cubs down 6-3. 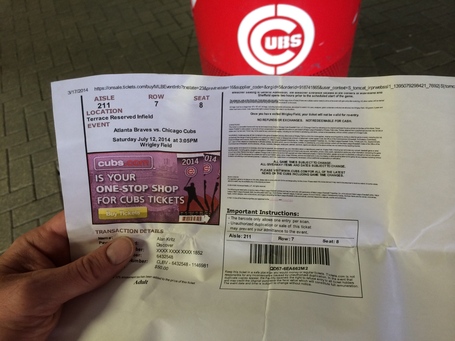 It's time for someone to check their printer settings and change their ink cartridges...

At least it was a real ticket! Not like when I bought useless paper, like at that Grateful Dead concert in Tampa in 1995. 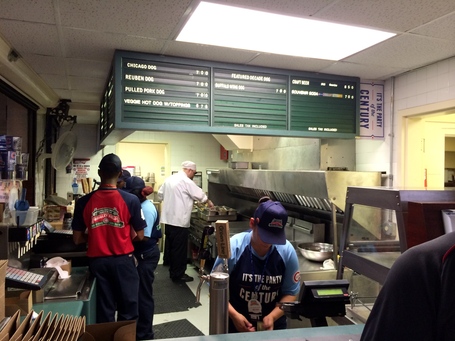 The guy in front of me got the Pulled Pork Dog which is going to be featured on the next themed home stand, commemorating the 1970s. 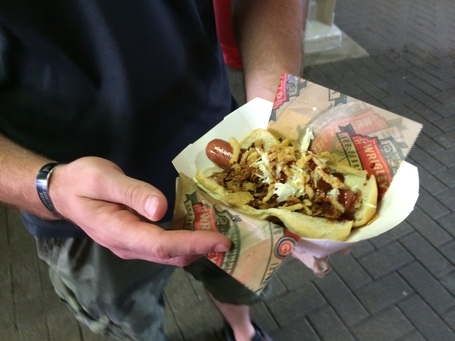 Incredibly jealous of that guy's delicious looking hot dog, I stepped up to the plate and grudgingly ordered The Buffalo Wing Dog. 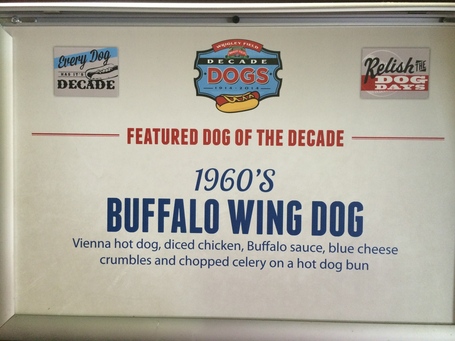 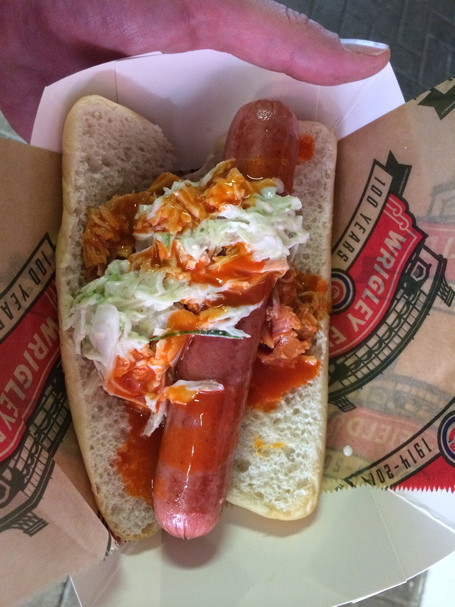 I see the Wrigley concession workers went to the same slop ladeling culinary academy as my high school lunch ladies.

My first impression of the Buffalo Wing Dog is that it is not served as described. First of all, 'that' is cole slaw carelessly spooned onto that wiener, not chopped celery. And Blue Cheese Crumbles?  The only thing crumbling was the bun under the weight of shredded, not diced chicken, drenched in wing sauce.

So with Buffalo Wing Dog in tow, I found my scalped seat just as the Braves tacked on three more runs to go up 9-3. I smoothed out the coleslaw with my index finger and redistributed the weight of the shredded chicken by squishing it through the bun to improve the hot dogs physical edibility, and took a bite.

Not bad! Not bad at all! Not worth $7, but after some of the Decade Dogs I've tasted this season, I was pleasantly surprised. The salty dog and the spice of the buffalo sauce complemented each other nicely. The cole slaw, though not in the original recipe, was a creamy cool down to the buffalo sauces heat. The shredded chicken was deliciously tender and juicy -- much better than the diced chicken and celery I ordered!

See, I'll never know what the Chefs at Wrigley intended for me to eat, because I was obviously given a mistake hot dog covered in everything but the listed ingredients. Shredded instead of diced chicken, no bleu cheese crumbles, and cole slaw instead of celery. This hot dog is made up of so many disparate parts, they should just call it the "Franken-furter."

I would say you get what you pay for, but I paid $7 for this hot dog. It tasted okay, but what in the heck is going on when the Cubs promote special Decade Dogs and can't even make them to taste good, or if on rare occasion, they do taste good, aren't even made correctly? (Heh, maybe the "mistakes" taste better than the real thing and that concessions worker was doing me a favor.)

I'd recommend trying the Buffalo Wing Dog above any other decade dogs I've eaten so far. That is NOT a rousing endorsement. If you happen to get a real one, I'd love to know how it tastes, because... I just reviewed a hot dog I've never eaten.

With the mistake Buffalo Wing dog chemically digesting in the preemptively taken antacid, and the Cubs losing 9-3 going into the bottom of the fourth, I settled in to my scalped seat hoping to watch the Cubbie comeback of the season. I then realized why my ticket had been so cheap outside. Obstructed view! 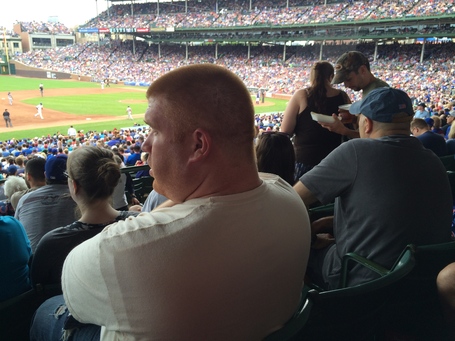