There's a 19-year-old kid pitching for Kane County who you ought to go see pitch, if you haven't already.

LANSING, Michigan -- Jen-Ho Tseng, who received a $1.625 million signing bonus from the Cubs just about a year ago, showed Friday night why the team was willing to invest that kind of money in him, even though he won't turn 20 years old until after this season ends.

Tseng threw six shutout innings, allowing just one hit and one walk. Meanwhile, his teammates were having a big night with the bat, and the Kane County Cougars crushed the Lansing Lugnuts 10-1, winning their three-game series and moving to a season-high 31 games over .500 (64-33 overall, 19-8 in the second half).

Tseng's pitching line doesn't even come close to telling you how dominant he was. He retired the first 14 Lugnuts he faced before D.J. Davis -- possibly the weakest hitter on the team -- bounced a ball that just barely evaded the diving try of Cougars second baseman David Bote. If not for that, Tseng might very well have thrown six no-hit innings. He's gone seven innings just once in his professional career and likely would have been removed anyway, especially because there were plans for Kyuji Fujikawa to throw another inning in his rehab assignment (more on that later). Tseng hit 93 on the stadium speed-pitch meter, but also mixed up his pitches well, changed speeds, had excellent command and other than the single, allowed just four other balls out of the infield, all routine fly outs. After the fifth-inning single, he issued a leadoff walk in the sixth, which he immediately erased by inducing a double-play ball.

As impressive as Duane Underwood was Thursday night, Tseng was better. In my view, he's too good for the Midwest League. I doubt the Cubs will promote him this year as he's still just 19, young for that level, but I'd say he's got a chance to skip High-A and move to Double-A in 2015 if he keeps pitching this way. If you've got a chance to see him throw at Kane County later this summer, don't miss it. The advertising sign behind him in the photo above says "Confidence." It's for a health insurance company, but there's no doubt that Tseng has that, and lots of it.

While Tseng was mowing down Lugnuts, his teammates were having fun at the plate,. Jeimer Candelario started the scoring with a home run to the left-center field berm in the second inning and then the team put together a four-run fourth, highlighted by a three-run homer from catcher Cael Brockmeyer. Brockmeyer's a tall dude at 6-5 and I wonder if his future is elsewhere than behind the plate, but the man can hit (.309/.384/.468 with four home runs in 139 at-bats, and Cooley Law School Stadium is definitely not a good home-run park).

The Cougars scored twice more in the fourth when Shawon Dunston Jr. singled with a runner on second base, who scored. Dunston then circled the bases when the ball got past the right fielder and went all the way to the wall for a three-base error. Never mind the error, Dunston can fly. He's got four triples and 12 stolen bases this year, and went 3-for-4 Friday night with three runs scored and two RBI.

As noted above, Fujikawa pitched again Friday night, a good test for him going two days in a row. He'd have gotten out of his scheduled inning of work unscathed, except that Dunston dropped a one-out fly ball allowing Mitch Nay to reach base. That happened in between two Fujikawa strikeouts. Manager Mark Johnson and Fujikawa's interpreter trooped to the mound after the second strikeout, but left the righthander in to try to finish off the inning. He nearly did; Dawel Lugo hit a ball that just barely got past a diving Jacob Rogers for an RBI double. After that, Fujikawa was lifted, the only run off him (and only Lugnuts run of the night) unearned.

Fujikawa looked good again, with good control and command and velocity in the low 90s. I don't know what the Cubs' plans are for him for future rehab outings, but he's now made six appearances covering 5⅔ innings, and allowed two hits, two walks, no earned runs, and struck out nine, and didn't seem to have any problem with throwing on back-to-back days. It would seem the team might be close to a decision on him returning to the big-league bullpen, maybe by the end of the month.

Adding to the enjoyment of attending minor-league baseball in Lansing was the discovery that Friday night's giveaway was a Ryan Theriot bobblehead. Theriot played in Lansing in 2001 and part of 2002 when the Lugnuts were a Cubs affiliate. Before the game, the bobbleheads were all lined up ready to be given away: 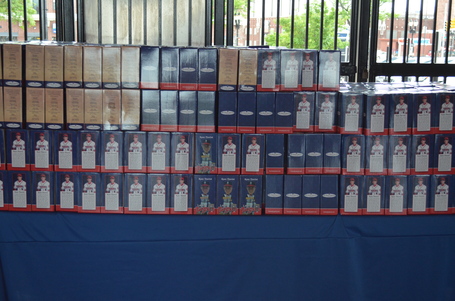 And, here's what it looks like, up close and personal: 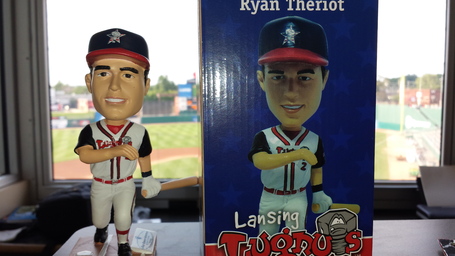 Watching the Kane County Cougars play, you can definitely see the changes in the Cubs' organization. This is a team that knows how to win, aside from the fact that they have quite a number of impressive prospects. You can see the occasional sloppy play, given that this is baseball four levels below the major leagues. But at times, seeing dominant pitching like Tseng's, or a big day at the plate like Dunston's, you can also see how guys like that will, with continued hard work and experience, get to the big-league Cubs and help them win, too.

Many thanks to BCBer Zeke (and Mrs. Zeke too!) for their kindness and hospitality on my visit to Lansing. Thanks also to Lugnuts media relations director Jesse Goldberg-Strassler, who was extremely helpful to this visiting writer, and among other things helped arrange an interview with Shawon Dunston Jr. I'll have that written up and posted sometime early next week. I'll also have a photo gallery up in the next couple of days with many more photos I took during the three-game series.

Lansing was fun. Minor-league baseball is fun. I'll definitely be back, and maybe head out to Kane County later this season if my schedule allows.