Concessions Of A Cubs Fan: The Pulled Pork Dog

BCB's Danny Rockett eats a Pulled Pork Dog so you don't have to.

Share All sharing options for: Concessions Of A Cubs Fan: The Pulled Pork Dog

The first question that came to mind when considering the Cubs celebration of the 1970s with a Pulled Pork Dog was "Why pulled pork?" Wouldn't a quiche or fondue dog be a more appropriate homage to the decade of disco? BBQ'd pulled pork is far older than 50 years. People have been cooking pork slowly over an open pit here since DeSoto brought hogs to the America's in the mid 1500s. Add some Native American and Caribbean spices and cooking techniques and the American BBQ pig roast was born. Even George Washington described going to a "barbicue" in his diary in 1769. So why the 1970s?

Then I remembered how I cook pulled pork. In a Crockpot! 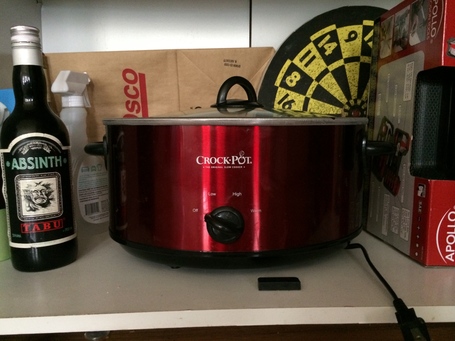 This is my Crockpot, which I store lovingly between a bottle of Absinth and a recently purchased tool set, and in front of a broken dartboard.

With more women entering the workforce in the 1970s the Crockpot, introduced in 1971, was the perfect way to prepare a family meal with minimal effort. I myself was treated to numerous slowly cooked stews in the 1970s courtesy of my mother, as my father's culinary skills stopped at defrosting hot dogs in the sink.

The Crockpot has a Chicago connection as well. Originally invented by the Naxon Utilities Corporation of Chicago, Joe Naxon was inspired to create the "Naxon Beanery All-Purpose Cooker" by his Jewish grandmother who described slow cooking a stew called Cholent in her native Lithuania. In 1970, The Rival company bought Naxon Utilities and reintroduced the device as a Crockpot in 1971.

Nowhere explicitly do the Cubs make any mention of the Chicagoan Naxon or the Crockpot being the inspiration for the Pulled Pork Dog, but it was the only connection I could find to the 1970s. I'd love to hear other theories.

I'd also love to hear other theories as to why I can't get a Decade Dog as described. This is what I ordered during Thursday's laugher loss to the Padres. 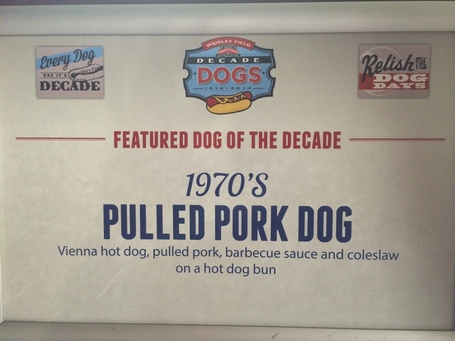 And this is what I received... 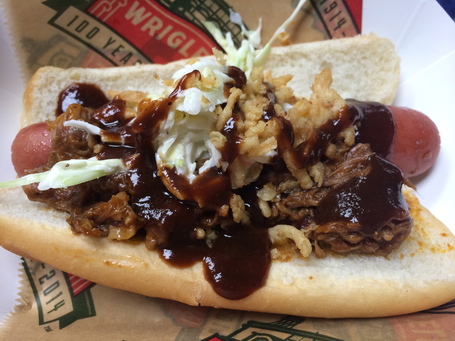 The Pulled Pork Dog sign does not mention fried onion crumbles, but there they are. No complaints from me either as they seemed a fine addition. Still, this is the second time in a row I've purchased this $7 specialty dog and received something different than described. The Buffalo Wing Dog wasn't even close. Although, this coleslaw looks awfully familiar. I believe the slaw was substituted for the bleu cheese crumbles and celery that was supposed to be on the 1960s Buffalo Wing Dog. Yet, here it is on the Pulled Pork Dog along with some extra onion crumbles. I wonder which hot dog the onion crumbles are supposed to be on?

Quality control issues aside, I returned to my Terrace Reserved seat to eat the overpriced wiener just in time to watch the Padres put up nine runs in the sixth inning. Unfortunately, it will be in impossible to to tell if the queasy feeling in my stomach was a result of the Pulled Pork Dog or Edwin Jackson's pitching performance.

The pork on salty dog action, smothered in Uncle Dougie's sweet and smoky BBQ sauce, and topped with coleslaw was an exercise in subtraction through addition. Like the Reuben Dog, the Pulled Pork Dog's cacophony of flavors tend to cancel each other out. I love pulled pork. I love hot dogs. Yet together when coupled with slaw and onion crumbles that are more crumble than onion, it tastes like all of it, and none of it at the same time.

I gave my initial reactions to my friend TJ and regular BCB reader and season ticket holder Rhett, who was sitting a row below me. "It's not bad, but it's not great either." TJ put it best when he nut shelled "It's not fusion, it's addition." This is precisely the case for all of the Decade Dogs I've eaten so far. Great chefs fuse ingredients to bring out individual flavors that would not taste as good without each other, whereas the Pulled Pork Dog is just a hot dog with pulled pork on it. Hey… at least it was better than the ballgame.

I make pulled pork about twice a month in my Crockpot. It's simple and it's much better than Wrigley's. I just buy a tenderloin, smother it in Sweet Baby Ray's BBQ Sauce and let it slow cook for five hours, often times during a Cubs day game. My friends think it's delicious, but all the credit goes to Sweet Baby Ray and Joe Naxon's Crockpot. Sweet Baby Ray's Sauce is by far the best BBQ sauce in the biz. Sorry Uncle Dougie, but I would have preferred SBR's sweeter and thicker sauce. I also would have preferred a simple pulled pork sandwich with some pickles as opposed to this conglomeration called a Pulled Pork Dog.

I do know one thing. If I keep eating these blasted things, I'm going to end up like this guy who I saw after the game. 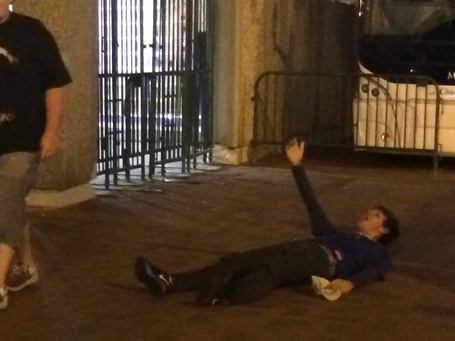