A Red Sox Fan Has To Wear A Dress at Wrigley Field!

When the Cubs clinched the series against the Red Sox on Tuesday, BCB's Danny Rockett won a friendly little wager with a Boston fan. Find out what the poor guy has to do!

Share All sharing options for: A Red Sox Fan Has To Wear A Dress at Wrigley Field!

During some fabulous future Cubs home game, Lyle, a Chicagoan, Red Sox fan and Boston native, will be wearing a dress during the entire game at Wrigley Field. My old roommate and friend of 20 years and I wagered on the Cubs/RedSox series this week, and much to my surprise, I won! And even better… I didn't lose.

The Cubs are looking better than any of us could have imagined these days. But still, I called Lyle in the first inning of Monday's game to try and change the bet to just having to wear a dress in the 7th inning. I was skeptical the Cubs would win two of three on the road and assumed the series would go something like it did in May 2011, when during the only game the Cubs actually won, Cubs outfielder Marlon Byrd frighteningly had his face broken with a pitch. I was sure I'd lose and figured I'd walk back the bet. It would be easy to handle one inning in a dress after a little liquid courage, but Lyle was so confident in his Red Sox that he called me a wimp and insisted the loser had to wear a dress for all nine innings. I was peer pressured into what I was sure would be a losing bet. But I accepted my fate, wagered my dignity and won!!!

After Tuesday night's win clinched me not having to wear a dress at Wrigley Field, which in many ways is a better prize than watching Lyle wear a dress, I wondered what I could offer "double or nothing" for the sweep. Maybe full drag instead of just a dress? Nahhh…. I think I'll take my money off the table so I can see my old friend sitting in the bleachers in a frilly frock. He'll likely look something like this... I took this at last year's Pride Parade. 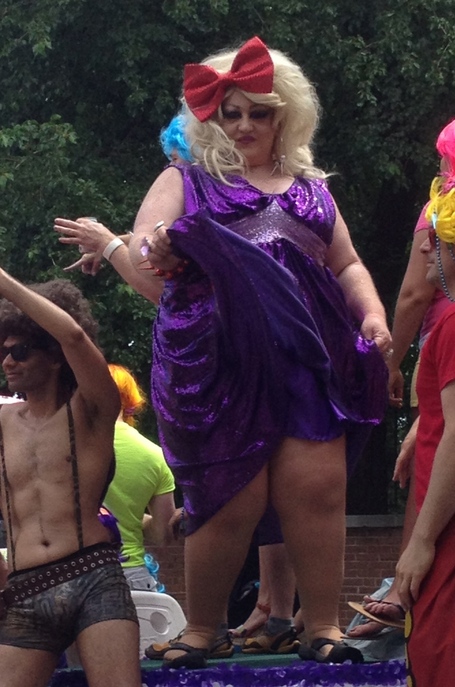 I will certainly let the BCB community know in which game Lyle will fulfill his dress wearing duties. Hell! That might be the best promotion of the year! They'll pack the house! Everyone will want to be at that game!

One bet down, but one to go. My wagering is not over until after the weekend. Another great old friend and drummer Johnny Onomatopoiea and I are halfway through a Cubs and Nationals bet. The season series is tied 2-2. The loser has to sing the victory song of the other team and post it publicly on YouTube. If the Cubs take two of three in DC, Johnny will be singing "Go Cubs Go" for the whole world to see. The Nationals don't have a victory song, but Johnny said he'd write one for me to sing. Who knows? Maybe Johnny and I will end up being the Steve Goodman of Washington!

The last time Johnny and I had a bet like this, we had a weight loss competition in which the loser had to play an hour of craps in drag. I won, but didn't make him fulfill his duties because of an incident not fit for print on a family-friendly blog. But over beers in the bleachers, I'd be happy to regale you with the tale of how I ended up walking through the worst Las Vegas neighborhood with $1000 cash in my pocket on New Year's Eve. Let's hope this Cubs/Nationals wager doesn't end like that…

Here's Johnny and me at Spring Training if that gives you an idea of the trouble we can sometimes get ourselves into. 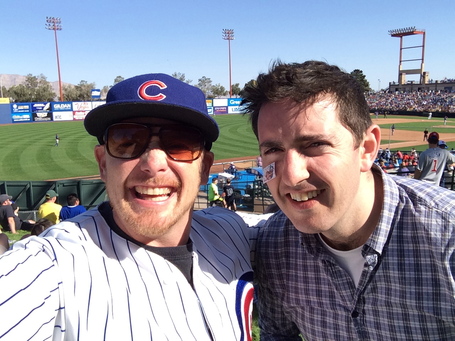 In a season where the Cubs aren't expected to make a run at the playoffs, making wagers on games and series can be a fun way to get through what can sometimes be a long season. Especially when the result of the bet is one of your oldest friends having to sit at Wrigley Field in a dress. It's going to be epic!

Lyle and I are trying to get a Cubs podcast off the ground, called The Son Ranto Podcast. We've been incredibly inconsistent, but we'll be talking about the Cubs and his dress wearing experience in the upcoming weeks if you're a podcast type person.

There is one more bet I have on the Cubs 2014 season, but I don't have a whole lot of hope for that one unfortunately. 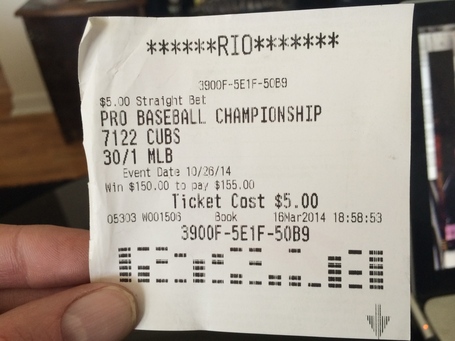