Six hours and 27 minutes later, a three-way tie emerged at the top of the Hero podium.

Share All sharing options for: Cubs Heroes and Goats: Game 105

Lost in the six-hour-plus marathon on Tuesday night was the start by Edwin Jackson, who pitched only four innings and threw 105 pitches. Just how rare was his performance? The only other Cub on record (since pitch counts started being tracked in 1988 on Baseball Reference) to throw 105 pitches or more and not start the fifth inning was Kerry Wood on May 13, 2001. And believe it or not, this isn't the first time that Jackson has thrown 105 pitches or more and didn't come back to start the fifth. So take a bow, sir. This golf clap is for you.

And although he won't show up on either podium: John Baker. The new Joe Mather.

Graphs for Game 105 (courtesy of Fangraphs): 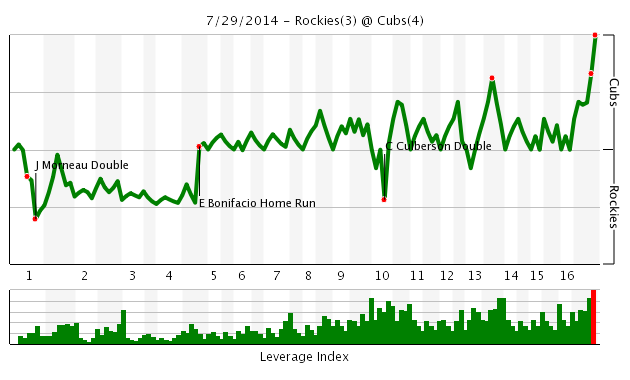 THE THREE HEROES: This is a first. A three-way tie at the top of the Hero podium. I could give a third of a share to each player, but I'm going to pull executive decision and assign podium spots based on who got themselves in the least amount of trouble.

UPDATED RANKINGS THROUGH GAME 105 (Changes in Bold, Notations Below):

The back end of the bullpen sweeps the Hero podium, while Schierholtz returns to his old ways with the Goats on a historic night at Wrigley Field.