In the absence of contention, the Cubs and Rockies provided some of the best Wrigley entertainment in years Tuesday night... and early Wednesday morning. (100 BCB points for identifying the song reference in the headline.)

The Cubs beat the Rockies 4-3 in 16 long, exciting, boring, ridiculous, sublime, and ultimately crazy innings Tuesday night. This game set all kinds of records, so let me simply list them before going on to describe as much of the silliness as I can:

And in that last point resides the funniest, and maybe most exciting, part of this remarkable game, because the last 11 of those 274 pitches were thrown by backup catcher John Baker.

Baker's "fastball" hit 79 on the Wrigley Field pitch speed meter. He got Charlie Culberson to hit a foul popup to Anthony Rizzo, then walked Drew Stubbs. The next hitter was Cristhian Adames, a 22-year-old infielder who had made his major-league debut six innings earlier. Adames hit a ground ball to Arismendy Alcantara, who started a double play to end the inning, which resulted in a roaring standing ovation. Well, "roaring" is perhaps the wrong word, because it's hard to hear a "roar" at 1:25 a.m. from about 500 people, all that was left of a crowd announced as 28,590.

As fate would have it, Baker was scheduled to lead off the bottom of the 16th inning. With the same 500 people chanting, "Baker! Baker! Baker!", the Cubs' backup catcher drew a leadoff walk and was sacrificed to second by Emilio Bonifacio, who had an excellent 4-for-7, two-RBI night with his second home run (just the 12th homer he's hit in a 2,331 at-bat career, incidentally). After Alcantara was hit by a pitch (the third Cub HBP of the night), Rizzo blooped a single just out of reach of the Rockies infield, loading the bases.

Starlin Castro hit a medium-deep line drive to right field that was caught by right fielder Charlie Blackmon (who had just moved there from center field, for some inexplicable reason, swapping positions with Stubbs). It would have somehow fit this crazy evening if Blackmon had thrown Baker out at the plate and the game had continued, but the throw was low, bounced in and Baker slid around what would have been a tag attempt for the game-winning run.

John Baker. Hero. Winning pitcher (the first Cubs position player to ever record a pitching win, incidentally). Who would have guessed that was going to happen at 7:06 p.m. Tuesday, when Edwin Jackson threw the first pitch of this marathon?

Edwin Jackson. Oh, boy. Perhaps the less said the better. Jackson threw the first 105 pitches of this game for the Cubs -- in just four innings. In all of major-league history there have been just 80 starting pitchers who have managed to throw that many pitches in four innings or fewer (as you might guess, all of them are recent; every one of those starts has been since 1988). Jackson gave up three runs in the first inning, and I can't really say he "settled down" after that, because the Rockies had runners in scoring position in each of his three other innings.

The Cubs scored a run in the first on a Bonifacio double and two singles, and then Bonifacio tied the game with a two-run homer in the fourth.

That was it for scoring for 11 more full innings. Great credit to the Cubs' bullpen (including Baker) for its Tuesday night/Wednesday morning performance. They threw 12 shutout innings, allowing three hits, five walks and striking out 13. All told, Cubs pitchers struck out 17 Rockies in the 16 innings. It's the 20th time in team history that Cubs pitchers have struck out 17 or more in a game (team record: 24 in this 17-inning affair against the Brewers, May 15, 2003).

On top of all that, an annoying little rainshower hit the ballpark around the ninth inning, lasting for about 20 minutes. It rained moderately, but considering the slow pace and lack of scoring in the game (the game headed to extra innings having gone three hours, 55 minutes for nine innings), the umpires never made any indication that they were going to stop play.

The Cubs used 22 players in this game -- everyone but starting pitchers Kyle Hendricks and Tsuyoshi Wada and reliever Hector Rondon, who had pitched two days in a row and was deemed unavailable for this one. The Cubs' winning run was scored off Tyler Matzek, who at this writing is still listed as the Rockies' starting pitcher for Thursday afternoon's series finale.

The game went so long that, according to what I heard, they nearly ran out of baseballs that had been properly rubbed up for game use. As you might know, baseballs are rubbed with special mud before each game to remove the gloss on them after manufacture. The umpires get 12 dozen such balls to use every day. Had they run out, they'd simply have had to use un-rubbed baseballs. Fortunately, Baker's heroics and Castro's game-winning RBI saved this game from that fate.

Here's a photo I took of the Wrigley scoreboard at the time this game officially became the longest game in Cubs franchise history: 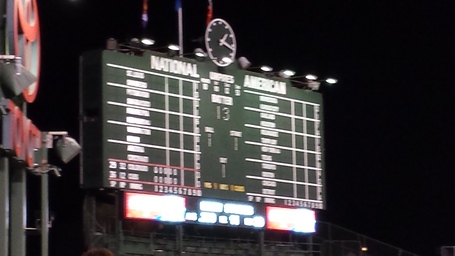 Usually, when the scoreboard clock has that time of day... it's daylight, not dark.

To cap things off, Tuesday's season-ticket image featured the 1977 scorecard. On that card was a drawing of Ernie Banks, as that was the year Ernie was inducted into the Hall of Fame.

Ernie. "Let's play two." The Cubs nearly did so in this one.

I had a blast, saw multiple records fall, and the Cubs won. What could be better?