Why I Didn't Go To The Cubs Game Monday Night

Share All sharing options for: Why I Didn't Go To The Cubs Game Monday Night

I arrived in Cincinnati Sunday night with full intention of going to all five games in this long series with the Reds, but Monday night I decided the allure of a $6 ticket wasn't enough of a reason to head over to Great American Ballpark to watch the ballgame live. See, I'm kinda sad about the Cubs.

I would love to join those of you who see a World Series Championship in that light at the end of the tunnel after stocking Iowa and Tennessee with the finest talented prospects in years. But I don't live in Iowa. I live in Chicago a mile from Wrigley Field. The future looks bright for certain. But I don't live in the future, either.

I didn't go to the game Monday night because the soul has been sucked out of this season. Jeff Samardzija, the Shark, the longest-tenured Cub, is gone. And the team feels it. They're demoralized. Not only did the Cubs lose the three games after the deal through Monday, but got blown out in two of them. I knew Monday night was going to be bad: Edwin Jackson pitching. A Reds team that the Cubs have a .295 winning percentage against over the last four years. A forecast for scattered rain showers. I've seen this show before and I wanted no part of it.

Remember back in those heady days of last week when the Cubs swept the Red Sox at Fenway Park and I won the bet that forces my buddy to wear a dress at Wrigley? Even only a few days ago, the Cubs beat the Nationals handily 7-2, leaving the Cubs with only one more victory to win the season series with the Nats. (And me, another bet.) But then…. The Cubs traded two-fifths of the starting rotation and went out and lost 13-0, only scratching out 1 more run the next day. Leaving the 2014 Cubs in shambles and me having to sing a Nationals fight song.

I get it. We should be excited for the future. We should celebrate each loss with dreams of high draft picks. We should count all the dollars saved with hopes of blockbuster free agent signings. But what I also see is a team that just had the heart ripped out of it.

The moment the Shark trade was announced, Cubs nation was abuzz with the excitement of our prospect haul. I looked at the numbers. Tried to believe the hype. Couldn't. And then felt sad that I might never see Shark in pinstripes again. Samardzija is a character. He looks like a mulleted Musketeer, and he's entertainingly candid in interviews. Jeff had emerged as a leader on a Cubs team that for the last few years seemed like a revolving door of "fix and flips," "also-rans," and "a bunch of guys you never heard of." If the 2014 outfield were a movie, it would be "Platoon." But Shark was the only leftover from the last time the Cubs were in the playoffs in 2008. If I feel a a void with his absence, imagine how the players feel.

It's easy for fans to see players as stats and shuffle them around in their fantasy leagues like pawns. But players are people. Flesh and blood. These men work hard together daily, sharing stories on buses and airplanes, and making bonds and friendships. Shark's presence on the Cubs was more than a 2.83 ERA. He cracked jokes, he played his favorite music in the clubhouse, and he inspired the younger players. He also wanted more money than I believe he was likely worth. So business being business, the Cubs shipped him off to hopefully get a World Series ring with the A's. Good luck to him, but it saddens me that it won't be with the Cubs.

I'm hopeful that the Cubs and I can shake off this loss. We didn't even get to say "goodbye." Oh, well... Time heals all wounds.

However, I believe it is worth pointing out the intangibles of a team such as leadership and personality are just as important as stats when it come to building a winning ball club. It certainly takes both. Just look how Milton Bradley and Carlos Zambrano, both very talented players, could sink a team. It took some time for Samardzija to emerge as a team leader, and hopefully over the next few years, someone will emerge to take his place. Who? No idea. Either way, this losing streak has to end and I did go to Tuesday afternoon's make up game (I already had tickets) to cheer them on to victory. Guess that didn't work. Again.

Early Tuesday, I hadn't decided whether or not to go the Double Dip. I wanted to get a look at Tsuyoshi Wada, but then thought maybe I'd rather go play an open mic or hit the casino. Or better yet, I'll just drive to Iowa or Tennessee and watch those Cubs. It will be like living in the future.

Update: Well... I went. To both losses. Probably should have just driven to Iowa, but at least I took some great pictures and had more fun than is legally allowed. 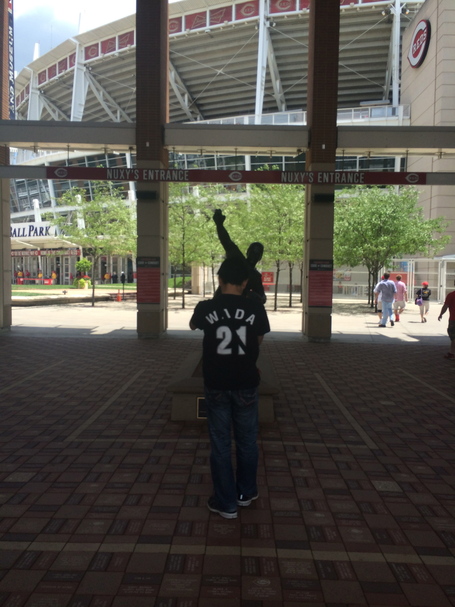 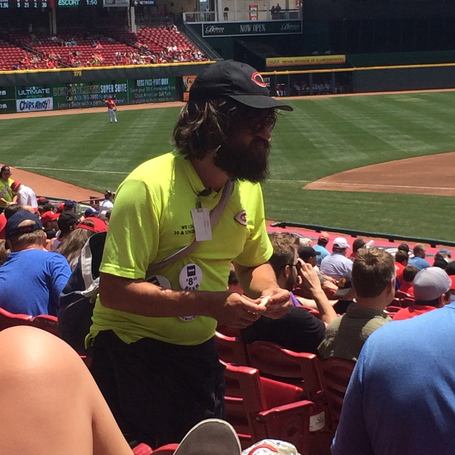 The Geico caveman has a new gig! 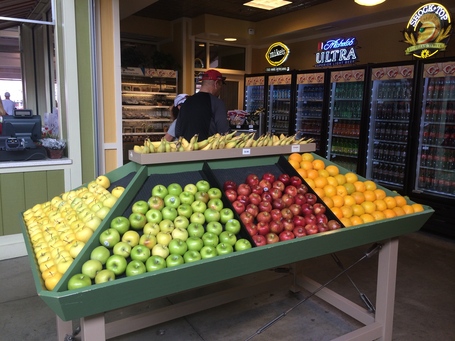 Fruit and beer! Together at last! 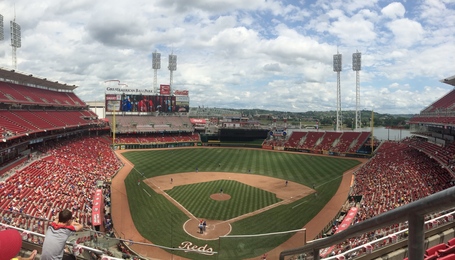 You can count the attendance on your fingers! 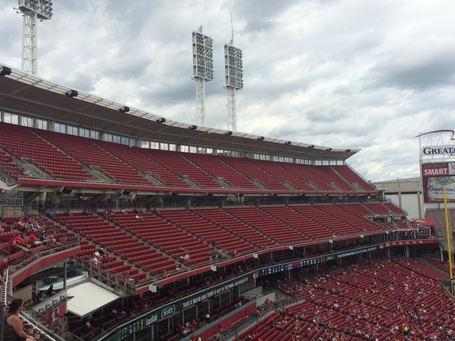 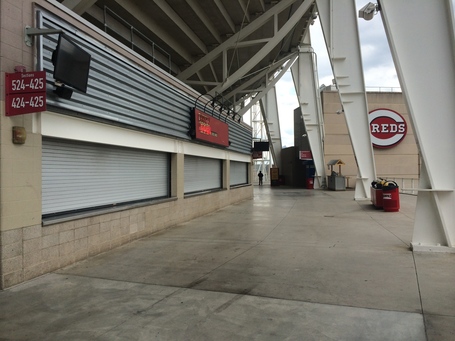 The concessions in the upper deck. Nothing was open. Nothing. 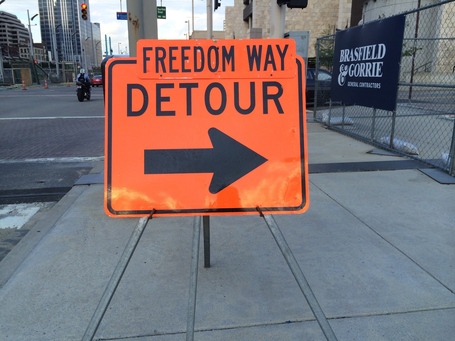 Apparently the path to freedom is under construction. 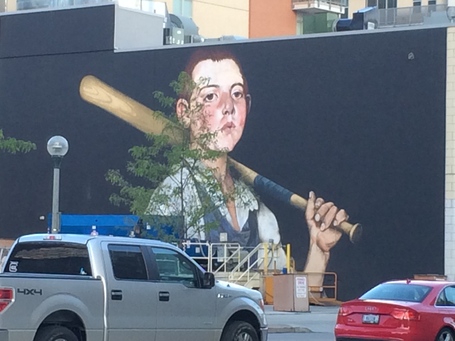 Pete Rose. Cincinnati's native son. And one of my all time favorites. So I had to buy this…. 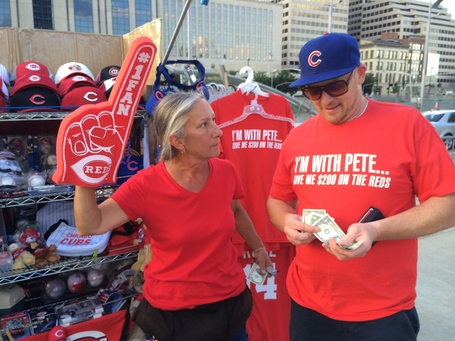 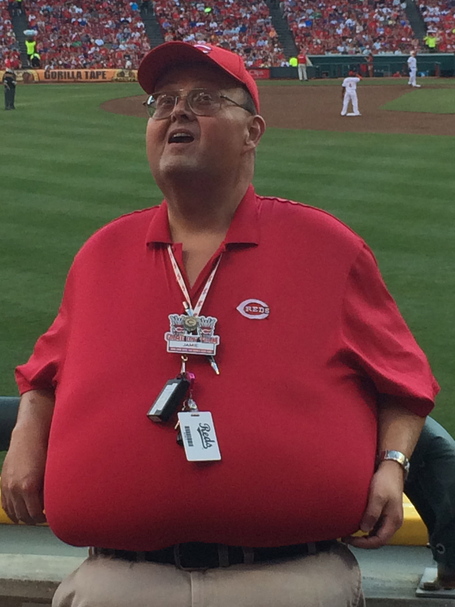 And the award for "Hardest Working Belt" goes to….. 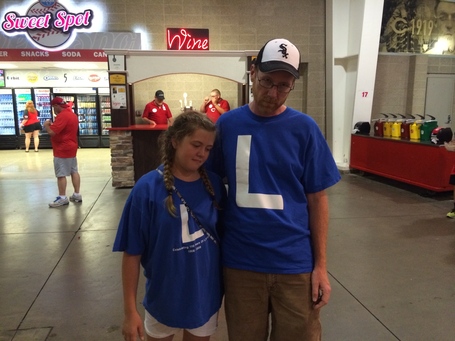 I'll never understand the "haters". Cheer for your team! Not against the Cubs! You should be happy when the Cubs come to town! We're terrible! 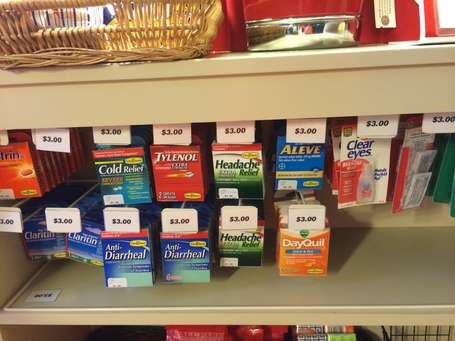 Everything you need to survive a doubleheader and ballpark food. 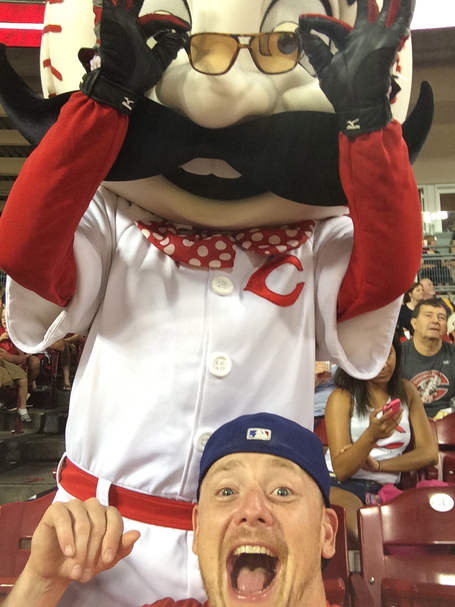 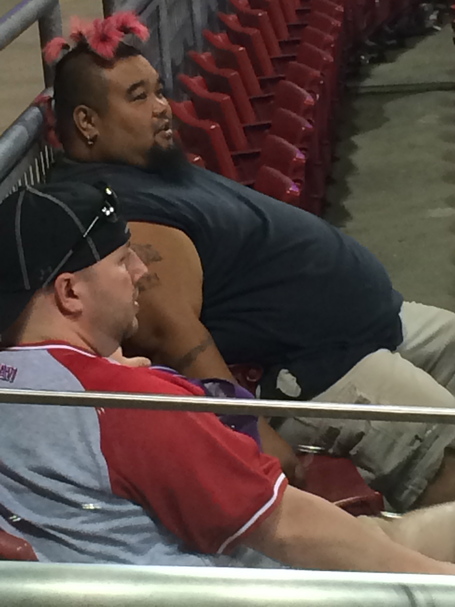 Going back tonight… One win. That's all I ask…..