We're getting into more recent times in the Wrigley Field 100th-anniversary celebration.

Share All sharing options for: Cubs Celebrate 1960s This Weekend At Wrigley

The 1960s were when I first attended a game at Wrigley Field (this one) and became an avid fan, as did many of my generation, by watching the Cubs on TV after school every afternoon.

This weekend, the Cubs host the Braves in a three-game series and the team will have 1960s-style giveaways, food and throwback uniforms (the latter for the Sunday game). Here are some details on what you can expect at Wrigley this weekend.

Friday, July 11, Cubs fans will be able to congratulate 2014 All-Star representative Starlin Castro as he receives his All-Star jersey from Majestic. You can still vote for Anthony Rizzo to join the festivities in Minneapolis as well through MLB’s Final Vote campaign. Vote for Rizzo at the Final Vote website or by texting N4 to 89269 until Thursday at 3 p.m. CT. From 9 a.m. to 3 p.m. CT Thursday you can also vote by tweeting with the hashtag #VoteRizzo.

If you are coming to any of the games this weekend, there's a giveaway each day. Friday, July 11, the first 10,000 fans will get a Gale Sayers bobblehead presented by Comcast SportsNet. Sayers will also lead the seventh-inning stretch that day. Here's the bobblehead: 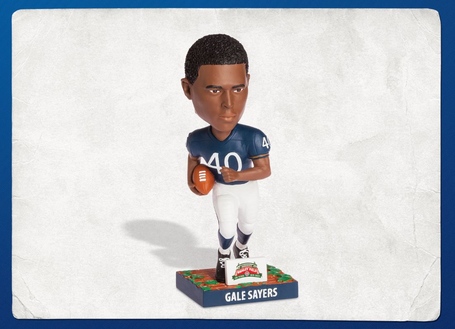 Saturday, July 12, the first 10,000 fans will receive a Billy Williams Retired Number Flag presented by Wrigley. Here's what that flag looks like: 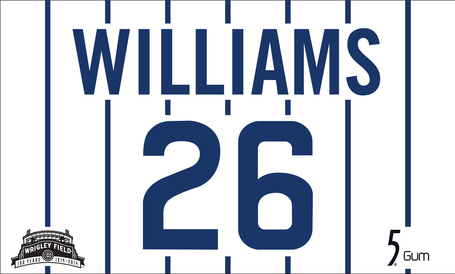 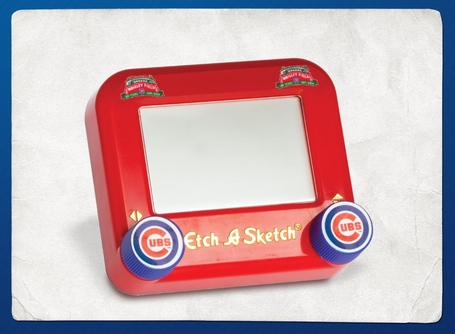 Also Sunday, July 13, the Cubs will wear a throwback uniform from 1969 to honor some of the team’s most popular players from the era. That squad featured Cubs Hall of Famers Ernie Banks, Fergie Jenkins, Ron Santo and Billy Williams, as well as other popular Cubs legends. The visiting Atlanta Braves will wear a 1969 throwback uniform as well. Sunday will be a day to remember as former players from the late ‘60s including Ernie Banks, Billy Williams, Randy Hundley, Rich Nye, Paul Popovich and Ken Rudolph combine to throw ceremonial first pitches and sing the seventh inning stretch.

The 1969 uniform, pictured at the top of this post, is the first of the throwbacks to closely resemble the current home uniform. The Cubs began wearing pinstripes in 1957 and, with some modifications in the logo on the front and the cub on the sleeve, have worn essentially this uniform ever since.

Levy Restaurants continues its decade-inspired menu at the Decade Diner, located inside Gate D near section 142. The 1960s homestand features a Kraft BBQ Pork Sandwich with Kraft Cheese and fried onions served on a toasted onion roll. Fans can also try the Traditional Buffalo Wings homestand special. These classic wings are tossed with Buffalo sauce and served with carrot and celery sticks along with ranch dipping sauce.

The Decade Dogs stand near section 123 is serving the 1960s Buffalo Wing Dog; a Vienna Beef hot dog topped with diced chicken, buffalo sauce, crumbled bleu cheese and chopped celery. The Buffalo Wing Dog is available all season. BCB's Danny Rockett, as usual, will be dispatched to try the Buffalo Wing Dog and report back to us. Here's what the decade dog looks like: 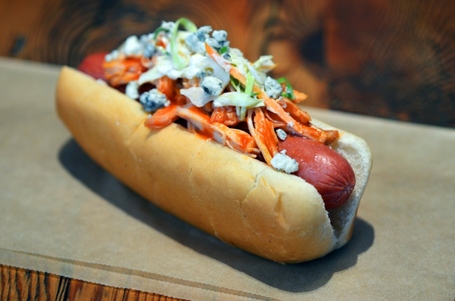 Finally, adults 21-and-over can enjoy an Alabama Ironman Cocktail. This modern twist on the Whiskey Sour pays homage to Billy Williams, made with peach puree, lemon and lime juice.