After a hiatus of a month and a half, Travis Wood finally finds his way back to the top of the Hero podium with his performance on Sunday afternoon.

Share All sharing options for: Cubs Heroes and Goats: Games 114-116

What ever happened to the days when school started the day after Labor Day? This year it starts on Monday here. For that matter, where exactly did May, June, and July go? Time gets easier and easier to lose track of, it seems.

Game 115 (Saturday - Rays 4, Cubs 0):
Superhero - Chris Rusin (.018). Need a nutshell summary of Saturday's game? This Superhero award should do the trick. Even better, he was off to Iowa right after it.
Billy Goat - Edwin Jackson (-.134). He's had much worse Billy Goat performances, so I guess that's a silver lining.

Graphs for Game 116 (courtesy of Fangraphs): 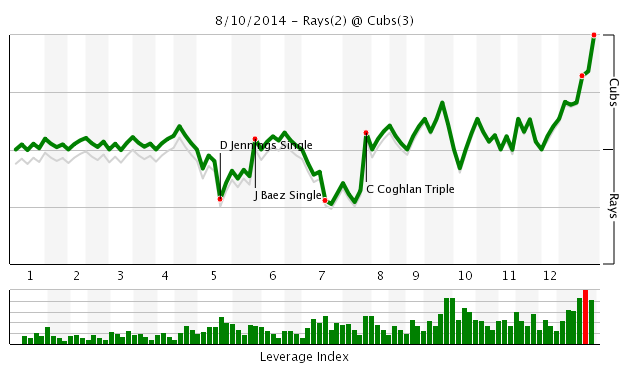 UPDATED RANKINGS THROUGH GAME 116 (Changes in Bold, Notations Below):

Wood picks up his first Superhero award since June 15, while Ramirez jams himself into his second Billy Goat of the season.