The game wasn't a throwback; that was Sunday. Something else was thrown back Monday evening at Wrigley that made news.

That was an impressive catch... maybe more impressive than any Cubs outfielder has made this year. 65-year-old Mike Pullin, who lives in Rochelle, Illinois, was the man whose grab prevented Mark Reynolds' second-inning home run from flying onto Waveland Avenue. Later in the evening, a crew from CSN Chicago set up to interview him right behind my left-field bleacher seat: 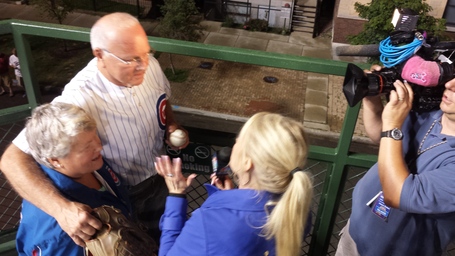 You probably noticed that the ball he almost immediately flung on the field -- you can see him reaching down to the bench for it in the video clip above -- wasn't the real ball. Here's where he got it:

Pullin told the CSN crew that he chose that seat -- which happened to be right next to where friends of mine, season-ticket holders, sit (you can see my friend in the green cap in the video) -- because he thought maybe Javier Baez might launch a home run in his direction. Instead, he got his proverbial 15 minutes of fame with his spectacular grab.

You already know how I feel about throwing back opponent home runs, and I don't want to belabor that here except to say that I'd have done exactly what Pullin did. Instead, I've posted a poll at the bottom of this recap. Please vote.

Oh, yes. There was a game apart from that grab, too.

After the homer, Jake Arrieta settled down and retired the next 13 Brewers before faltering in the eighth inning an allowing another run; it could have been yet another score for Milwaukee except for two fine throws after Scooter Gennett doubled. Arismendy Alcantara got the ball and relayed to Starlin Castro who threw Ryan Braun out at the plate. The play was reviewed, not by challenge, but by the crew chief:

Apparently, they're reviewing almost every instance of a Rule 7.13 violation -- that's the new rule about catchers blocking the plate. It didn't seem anywhere close to a plate block by Welington Castillo; he set up exactly where he should have and Braun was out by quite a bit. This rule is another thing that might have to be tweaked after this year. I'm glad they eliminated collisions at the plate because they were beginning to cause serious injuries. On the other hand, there doesn't have to be no contact between players and it seems silly to review every single one of these plays. Looking at the MLB Replays Twitter feed, there have been nine such reviews already this month.

The Cubs had tied the game in the bottom of the fifth on a pair of singles by Justin Ruggiano and Welington Castillo and a double by Chris Coghlan. It might have been two runs scored on that double, but Arrieta failed to lay down a sacrifice bunt to move the runners up a base. If pitchers are going to continue to bat, they're going to have to learn how to do this better. Maybe Arrieta should have just swung; he did have a hit in his first at-bat.

Had the game been tied in the ninth, would we have seen Brewers closer Francisco Rodriguez? K-Rod has been outstanding this year, with a major-league-leading 36 saves and only four blown saves. Maybe the game goes into extra innings again if the Cubs could have scored that second run. Or Justin Grimm wouldn't have pitched the ninth, allowing the Brewers' third run.

Also of interest: a 13-pitch at-bat by Anthony Rizzo off K-Rod leading off the ninth. Rizzo swung and missed at the first pitch, fouled off five straight pitches, then took three straight balls before fouling off three more K-Rod offerings. Then he struck out on a changeup. Tough out, especially after Castro followed it with a single, but that was one of the best batter-pitcher battles I've seen in recent years.

The Cubs struck out nine more times Monday and have 53 Ks and just two walks so far this homestand. Just one of the strikeouts was from Baez; he had some good at-bats and went 1-for-4 with a double.

Apart from that and the 15-minute downpour that rained on the fourth inning (the umpires were seen conferring with someone on the grounds crew at one point, and were likely told the rain would pass quickly), the story of the game was Mike Pullin. Nice grab, Mike (and he's lefthanded, too). Can you hit? There might be a spot on the Cubs bench for you.