Now THAT is the way I'd like to see the game played every day!

As you can imagine, Tuesday night's 3-0 Cubs win over the Brewers was my favorite game of 2014.

As good as Kyle Hendricks had been over his first five major-league starts, he was even better in the sixth. What a treat to watch this 24-year-old rookie carve up major-league hitters. When he wasn't getting Brewers hitters to beat the ball into the ground (nine ground-ball outs), he was getting them to swing at nasty curveballs. For a time it looked like he might have a low enough pitch count that even Rick Renteria would allow him to finish the game, but you could tell that he was running out of gas in the eighth inning. The Brewers smacked a few loud foul balls before loading the bases on three singles. Hendricks, who had thrown just 83 pitches through seven innings, got his count up to 96 with the rough start to the eighth, and with the tying run on base it made sense to get a fresh arm in the game

Hendricks left to a loud standing ovation and Pedro Strop had one of the more efficient setup outings you'll ever see, taking just three pitches to get Jonathan Lucroy to hit into an inning-ending double play.

Hector Rondon (15th save) was just as efficient, throwing just eight pitches in a 1-2-3 ninth inning, and the Cubs evened up the series with Milwaukee, and in doing so, helped the Pirates, who defeated the Detroit Tigers for the second consecutive night, move to within 1½ games of first place in the N.L. Central.

Best of all, the game was completed in a speedy two hours, 22 minutes, the third-fastest game of the season and the quickest Wrigley Field game of 2014. In fact, it was the fastest Wrigley Field game since August 19, 2013, a span of 74 home games. That game was also the last in which a Cub starter threw a complete game, a span of 156 games, nearly one full season's worth. Eventually, it'll happen again, and perhaps thrown by Hendricks, who is, so far, exactly the type of pitcher I hoped he'd be.

How fast was this game? So fast that I was able to get home before the third overflow thread was scheduled to post (I deleted it).

We must temper this enthusiasm with this caution: as Hendricks throws more big-league games, scouts will get more of a "book" on him, and the second time he faces clubs will be a test on his ability to adjust. I think he's got that ability. He'll never be a 95-plus thrower; he gets by on his intelligence and ability to locate, which he was doing amazingly well Tuesday night. He's cementing for himself a place in the 2015 rotation, and is simply a pleasure to watch.

The Cubs didn't have much offense Tuesday night, but with the shutout pitching they didn't need much. Justin Ruggiano went 2-for-3 and drove in the first run of the night; Arismendy Alcantara had an RBI single before being thrown out trying to steal. It looked as if he hadn't been tagged -- and there were audible groans from the portion of the Wrigley Field crowd that could see the replay on TV monitors -- but Alcantara got right up and trotted into the dugout. He probably told Renteria he was out, the reason Rick never came out and asked for a review.

Anthony Rizzo completed the scoring with his 26th home run, an opposite-field shot, and his first since July 22, a span of 90 plate appearances.

Javier Baez went 0-for-4, which isn't great, but did have some good at-bats and didn't strike out, which counts for something, I'd say. He also made some nice defensive plays at second base, a position he's still learning.

After a cloudy, drizzly day, the sun came out just after the game started, illuminating Wrigley Field this way (click to embiggen): 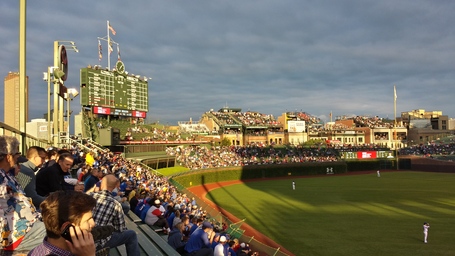 Beautiful, I'd say. Just like Tuesday night's game. You might be excited, and rightfully so, about the possibilities for Baez, Jorge Soler, Kris Bryant and other Cubs hitting prospects. I am, too, but what I really want to see over the next few years is many more starts like Tuesday night's from Kyle Hendricks.

It was nice to meet BCBer The Scientific Dinosaur and his dad; they sat with our group for the last few innings of this game, and they got to see what was in my view the best game of the year.

Wednesday night, it might be a little tougher to win, as Cubs nemesis Kyle Lohse takes the mound for the Brewers against Tsuyoshi Wada. Game time, again, is 7:05 CT.