What sort of commissioner have the owners just elected?

One of the most interesting things about Rob Manfred, who will take over as Major League Baseball's 10th commissioner January 24, 2015 upon Bud Selig's retirement, is that he will be the first person to hold that job whose primary career has been working either with baseball (as a private attorney) or as a baseball executive (for the last 15 years).

Think about it. All the other men have been either outsiders or, in the case of Selig, a team owner:

The job of commissioner isn't what it was when Landis was handing down edicts in "the best interests of baseball." Remember that he was hired in the aftermath of the Black Sox scandal to help clean up the sport -- he did that, and well, though he had his negatives, particularly in resisting calls to allow African-Americans into the major leagues.

Commissioners now must rule by consensus, and for all Bud Selig's flaws -- and there were many -- he was adept at doing that. Manfred, Selig's second-in-command, has been expert at doing that, particularly in negotiating with the players' union and having been one of the key people in producing two decades of labor peace, something we all hope continues. MLBPA chief Tony Clark, the first former player to lead the players' union, said about Manfred: "On behalf of the players, I want to congratulate Rob Manfred on being named Major League Baseball’s 10th Commissioner. As representative of the players, I look forward to working closely with Rob, the Clubs' representative, as we strive to sustain the growing popularity and prosperity of our great game. Personally, I have known Rob for more than 15 years, and I’m confident that his vast experience in all aspects of the sport will serve his commissionership well."

While there were dissidents among the owners, particularly White Sox owner Jerry Reinsdorf, who wanted a harder line with players (seriously? Who would want to go back to the way the game was in 1994?), after their choice, Tom Werner, was eliminated. Reinsdorf said via an emailed statement:

I hope Reinsdorf means what he says.

I could make a laundry list of the things the next commissioner will need to tackle: tweaking the replay-review system (and Rule 7.13, the blocking-the-plate rule), the DH in both leagues, the pace of the game, the Oakland Athletics stadium situation, TV blackout rules and the next labor negotiation. None of those things can be unilaterally decided by Rob Manfred, though. All of them will require multiple parties to be involved, and we can only hope that Manfred, who at 55 is a full generation younger than the 80-year-old Selig, will bring a more modern outlook to solutions to those problems than Selig, who often appeared to be mired in a 1970s mindset.

There is one thing that I believer Manfred could do unilaterally that would not affect owners nor players greatly, but would give him much popularity among fans, and that's to get rid of Bud Selig's "This Time It Counts" All-Star game providing home-field advantage in the World Series. It was a bad idea when it was first proposed and it's still a bad idea. For many, this is the lasting image of Selig that will remain in memory forever: 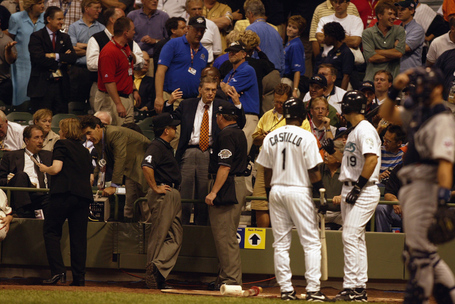 There's absolutely no reason, as in the NBA and NHL, other leagues that don't know the locations of their Finals hosts until a few days before the series begins, that MLB couldn't simply give home field in the World Series to the team with the better record -- especially since World Series dates are known a year ahead of time. This is something I'd love to see Commissioner Manfred do right away. It'd buy him quite a bit of goodwill from fans, at least, as he then moves on to tackle the tougher problems that the game faces going forward.

I wish Rob Manfred all the best, and good luck in a very tough job. At 55, if he does well, he's likely going to have this post for 20 years, if he wants it. These will be challenging times, but as Manfred's already been working in baseball for 15 years, he should be up for the task.