We're getting ever closer to the present day in the Cubs' decade celebrations.

Already? Why, it seems as if the Cubs just finished a homestand...

They did. But after a four-game weekend "wraparound" trip to New York that ends Monday, the Cubs will return to Wrigley Field for a six-game homestand against the Giants and Orioles from August 19-24. The 1990s will be the decade you'll see honored with giveaways, food items and throwback uniforms. Here's a sample of some of them. 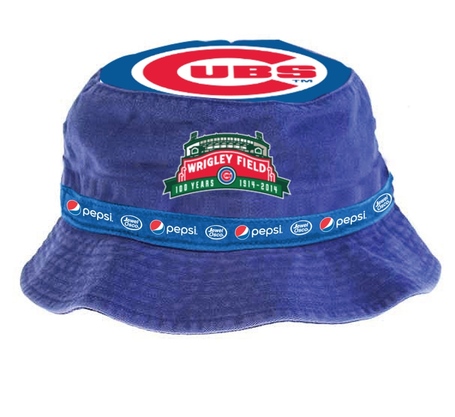 As part of the Wrigley 100 bobblehead series, there will be a Kerry Wood 20-strikeout bobblehead given before the game Friday, August 22. That'll be for the first 10,000 adults 21-and-over, because it's being sponsored by a beer company. Here's what it will look like: 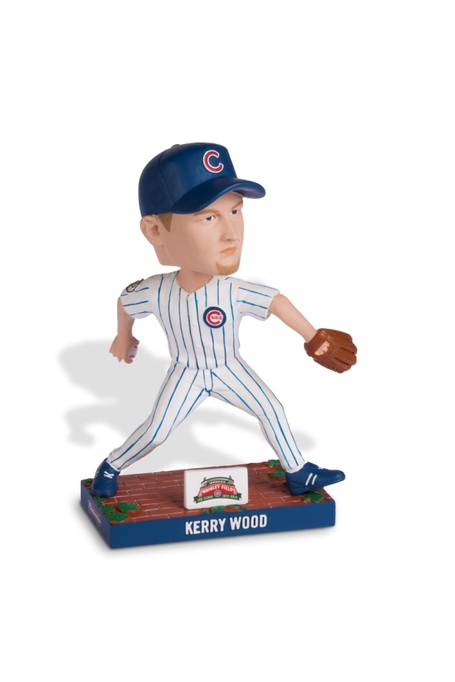 To help Wrigley Field continue its season-long centennial celebration, American rock band O.A.R. will perform an Extra Innings Show as part of a free music event. The event will take place Saturday, August 23, from 11 a.m. to 8 p.m. in the Red and Purple Lots on the west side of Wrigley Field. O.A.R. will take the stage for a 90-minute postgame set immediately following the conclusion of the Cubs’ afternoon game against the Orioles, while other live entertainment will be available throughout the day.

On Sunday, August 24, the Cubs will wear a throwback alternate uniform from 1994 with "Cubs" written in red script across the front of the jersey: 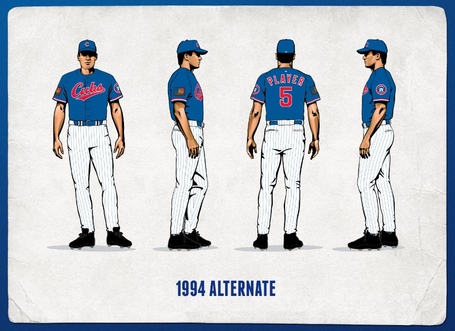 This is the famous road uniform that we all called the "Cuba" uniform back in the '90s, as the script "s" in "Cubs" looked very similar to a script "a." As a throwback, it'll be fine, but I'm glad the team stopped using them. Like the 1970s throwback uniform, this jersey was worn only on the road. It will also be the first throwback uniform this year to have names on the back.

The visiting Orioles will wear a throwback road uniform from 1994 as well. Here's what they are expected to look like, via our SB Nation Orioles site Camden Chat. For reference, this is the current Orioles road uniform, which they'll wear Friday and Saturday.

Levy Restaurants continues its decade-inspired menu at the Decade Diner, located inside Gate D near section 142. The 1990s homestand features Kraft beef tacos with rice and beans. The tacos are made with seasoned ground beef topped with shredded lettuce, tomatoes, shredded Kraft Cheese and sour cream. You can also try the Salmon Burger, which is a house made salmon burger on a toasted sesame bun served with avocado, candied red onion and herb aioli.

The Decade Dogs stand near section 123 is serving the 1990s Bagel Dog; a Vienna Beef hot dog wrapped in a warm bagel with deli mustard. BCB's Danny Rockett has been out of town and so his review of the previous homestand's dog has been delayed, but we'll get to that and send him out to review this one, too.