It's been said that if you watch enough baseball games, sooner or later you'll see something you've never seen before. That happened Tuesday night at Wrigley Field... and I hope to never see that again.

Anthony Rizzo hit a two-run homer (his 29th, a monster blast onto Sheffield) off Ryan Vogelsong in the first inning and Tsuyoshi Wada scattered six hits for his first major-league complete game and shutout Tuesday night at Wrigley Field as the Cubs opened a six-game homestand with a 2-0 win over the Giants.

Talk about burying the lede. (And yes, I resisted using "Wada, Wada Everywhere" as the headline.)

Those are the game details, but not the story of the game.

The story of this game was a ridiculous four-hour, 34-minute rain delay (as far as I know, the longest delay in the history of Wrigley Field) that resulted in the game being called at 1:16 a.m., since it had -- just barely -- gone long enough to be considered "official" by baseball rules. Wada had retired Buster Posey on a popup to shortstop to end the top of the fifth inning as rain began falling. The Giants took the field for the bottom of the fifth, but Vogelsong hadn't thrown a pitch in that inning when the umpires stopped play.

Those of us watching a couple of tiny little thunderstorm cells in the area noted one bearing down on Wrigley. That one started to fizzle out -- only to blow up into a torrential downpour almost literally right overhead at Clark & Addison streets in Chicago. The umpires waited too long before suspending play (and this is the risk they take these days, when they often play through fairly heavy rain), and that's what resulted in the grounds crew -- a bit shorthanded, I have heard, in a money-saving effort by the Cubs -- not being able to handle the tarp in the heavy rain and high winds. By the time they got the main tarp -- and a couple of smaller tarps dragged over from the bullpens -- down on the infield, both the area behind second base and a larger area near third base and shortstop were lakes, this even though the Cubs' Lake, Junior, had been sent down to Triple-A Iowa last week.

It didn't rain for more than 20 minutes, but I'd guess over an inch of rain fell in that short period of time. In addition to the infield, there was considerable standing water in the outfield and the warning track.

On came the grounds crew with dozens and dozens of bags of Turface, the substance used to dry off infields that get this wet. They worked and worked. The infield didn't dry off; muddy patches stayed no matter what they did. There was a rumor -- duly tweeted by me -- that the Cubs had completely run out of all the Turface they had for the rest of the year and had to call out to Home Depot for more. Not true; they had some in storage at the Brown Lot parking lot, which is about four blocks away. A van brought more bags over, which was carted in through the right-field gate. On and on and on they worked. I took this photo at 10:57 p.m. CT, almost two hours after the rain had stopped: 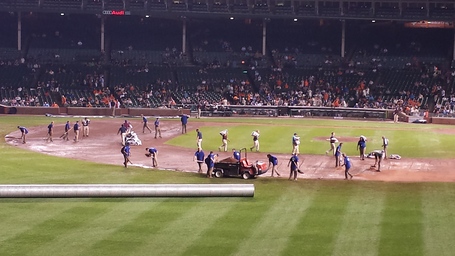 And right here is where it started to get ridiculous. After they got all this stuff down and raked, from time to time, players or coaches or managers or umpires or Cubs executives or some combination of the above would walk out onto the soggy dirt, give grave looks of concern, tap their feet on the ground, scuff around, even throw baseballs around at times, and then headed back into their respective dugouts or clubhouses, probably harrumphing with grave concern, though that couldn't be seen from my location in the bleachers.

The bottom line is this: if you can't get the field ready for play within two hours after what was admittedly a torrential downpour, just admit the field is unplayable at that moment and call the game! Waiting longer than that endangers the players, not only because of the field conditions but because, having waited that long, players' muscles might have tightened up from the long delay, making them more susceptible to injury. Further, only two brief P.A. announcements were made, both stating that the teams and umpires "hoped" to continue play.

All of this is utterly disrespectful: to players, to media, to stadium employees (some of whom, I learned, were scheduled for 14-hour days Wednesday and had to be back at work at 8 a.m.) and to fans, only a few hundred of whom stuck around until the game was finally, mercifully, called at 1:16 a.m.

The Giants and manager Bruce Bochy were livid about this mess for quite a number of reasons, one of which is this rainout at spring training this year, March 1 in Mesa, in which a similar circumstance occurred. A sudden downpour left the grounds crew at Cubs Park -- where just nine men struggled with the tarp -- unable to cover the field in time. It should be noted that grounds crews in Arizona aren't used to rain like that, but again, the crew appeared shorthanded. Guess who the opponent was? That's right, the Giants.

I will say this. I saw reports on Twitter during the delay that Giants radio and TV broadcasters were accusing the Cubs of  "conspiracy" in intentionally waiting too long to put the tarp on. The nicest thing I can say about that is: that's completely incorrect, not to mention unprofessional on their part. The Cubs grounds crew did their best under very difficult conditions, made worse by the fact that the umpires waited too long to stop play.

There's another factor that must have weighed heavily on the decision to wait: About four weeks ago at Yankee Stadium, an almost identical circumstance occurred -- heavy rain prevented the Yankees' grounds crew from covering the field at exactly the same point in the game, four and a half complete innings with the Yankees ahead. Here's the MLB.com game story, which includes this MLB-issued statement:

"Last night's game was called because of the sudden onset of extreme rain, which affected the ability of the grounds crew to put the tarp in place," the statement said. "Because no 'malfunction of a mechanical field device,' as prescribed in Official Baseball Rule 4.12(a)(3), contributed to the unfortunate circumstances, the game did not meet any criteria to be suspended.

"We trust the judgment of last night's Umpires, who deemed the field unplayable despite the legitimate effort of the sufficiently-staffed grounds crew to cover it. Because of the condition of the field following the heavy storms, we believe the right decision was made from a player safety standpoint."

According to this CSN Bay Area article, the Giants are planning on filing a protest. They have little chance of winning:

The Giants expected to file a protest, knowing their only hope was a narrow one: Commissioner Bud Selig invoking the rarely used "best interests of baseball" clause.

"I’m frustrated. I’m beside myself," Bochy said. "It’s probably not the right frame of mind for me (to comment) because it’s my last recourse. I hope they listen and watch what happened there.

"In this day and age, it cannot happen. It shouldn’t happen. So I’ll leave it at that."

Bochy's right about one thing, the last paragraph in the quote above. Things like this cannot and should not happen in modern baseball. Yes, I'm happy that the Cubs won in this weird fashion, but the right thing to do would have been to suspend the game and finish it before tonight's contest. That can't be done under current baseball rules, as noted in the Yankees/Rangers game article:

MLB cited official Baseball Rule 4.12(a)(3) on suspended games, which states:
(a) A game shall become a suspended game that must be completed at a future date if the game is terminated for any of the following reasons:
(3) Light failure or malfunction of a mechanical field device under the control of the home club. (Mechanical field device shall include automatic tarpaulin or water removal equipment.)

Since the Cubs' tarp isn't a "mechanical field device," instead being a field cover that has to be deployed by the grounds crew, that rule couldn't be invoked by the umpires. Why not give umpires the authority to suspend any game of this nature, when weather and failure to cover the field -- in part due to the umpires' own failure to halt the game quickly enough -- make the field unplayable? It was clear to just about everyone in the park that the only thing that would dry off the field to put it in playable shape was a few hours in the sun, and that wasn't going to happen at 1 a.m. It'd take a change in the suspended-game rules, but I'd say do it for any game, like this one, that's gone past the official-game point (five innings, 4½ if the home team is ahead), regardless of whether the game is tied or not. In fact, had this game been tied, it very likely would have been suspended; that rule change for tie games halted by rain was instituted after the 2008 World Series rain debacle in Philadelphia.

There was some humor provided by all this; at one point Cubs head groundskeeper Roger Baird was out on the infield, raking the dirt by himself, leading me to dub him "The Lone Raker":

The Lone Raker has returned pic.twitter.com/GKdF540DGm

Amusing? Well, that video is, anyway. Entertaining? The evening was, at times. Fun? Let's just say it was a lot more fun the last time I stayed at Wrigley until past 1 a.m. This one can only be described as "absurd" or "ridiculous," and I hope it leads to changes in MLB rules allowing umpires more latitude in when to suspend games. They've also got to do a much better job of keeping fans and media informed. Not only were there only the two P.A. announcements, but given tweets I saw from both Cubs and Giants media, reporters and broadcasters were as much in the dark as people in the seats.

The two clubs will meet Wednesday evening, thankfully with no threat of rain until after 1 a.m., with Edwin Jackson facing Jake Peavy... and with those two pitchers going, tonight's game might take that long naturally.