In what will go down as one of the most bizarre games in Cub history, Tsuyoshi Wada takes the Superhero award on Tuesday night, primarily because voting for the grounds crew is not allowed.

It's times like this that watching the game on MLB.tv doesn't do justice to the underlying hilarity of the situation. Here's the scenario in my part of the world (also known as West County, St. Louis):

After getting home at about 8:30 Tuesday night and only knowing that the score of the game was at least 2-0 Cubs courtesy of two runs scored in the first inning (thanks, MLB At-Bat Notifications), I went to the computer downstairs and started the video of the game from the beginning, taking the utmost care to not get the updated score of the game or any other details.  I then found out that the 2-0 lead was courtesy of the monster homer onto Sheffield from Anthony Rizzo -- which was quite the sight to behold, I must say -- and proceeded to watch the rest of the game tape-delay style as if it were the '70s and '80s all over again, only catching up two minutes at a time because of the commercial breaks that I was able to skip.

Then the rain came in the fifth inning, along with the famous last words from JD: "This shouldn't take long." I saw the tarp go onto the field cockeyed and thought to myself "Well, that looks interesting," not figuring that it was going to be a huge issue as MLB.tv cut away to their standard message of "This Game is in Rain Delay."  And so I started fast forwarding about five minutes at a time, figuring that I'd catch up with the action pretty quickly.

After closing the gap between taped action and live action by about an hour, I still see the same message on my screen:  "This Game is in Rain Delay."  Maybe the rain was a little more than JD expected, I thought.

I get to live action, having fast forwarded through close to an hour and 45 minutes.  Still, "This Game is in Rain Delay." Maybe the rain was a lot more than JD expected, I thought.

I check the Chicago radar on Weather Underground.  There's a rain blob that's well to the east, but aside from that nothing in the area.  Still, "This Game is in Rain Delay."

Time passes.  I'm doing some other work on the computer, MLB.tv window minimized, waiting for the game to return.  Nothing.

Somewhere around midnight, something kicked into my head and said "Well, maybe I should check the Game Threads and see if they have any updates about what's going on." And only then did I discover the true nature of the beast, the calamity caused by one misplaced tarp, along with the video set to the "Benny Hill music" (actual name: "Yakety Sax") that was spreading across the internet like its own viral comedy skit. And after shaking my head at nobody but myself for not thinking to check things out  about an hour earlier than I did, I proceeded to close the MLB.tv window and go to sleep.

So thank you, BCB Game Threads, for providing the rest of the story when MLB.tv is only allowed to tell the average viewer this lacking piece of information:

Graphs for Game 125 (courtesy of Fangraphs): 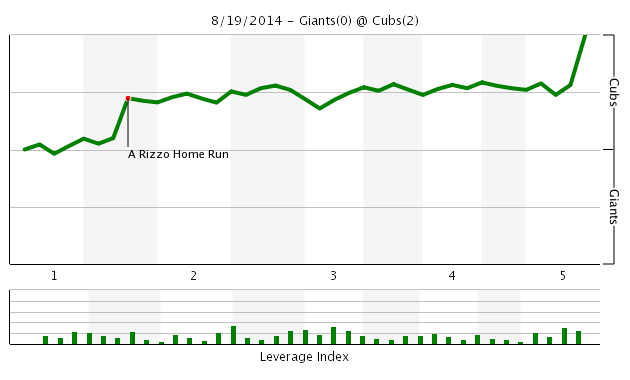 UPDATED RANKINGS THROUGH GAME 125 (Changes in Bold, Notations Below):

Rizzo continues his climb up the charts, while the grounds crew reviews their diagrams to find the proper angle for rolling a tarp cylinder in case of a weather event.