This would have been a bigger story if it hadn't rained Tuesday night.

I was going to write something in my game recap about the narrowing of Sheffield and Waveland Avenues by the city of Chicago so they could do preliminary work in advance of the Cubs' Wrigley Field renovation project, but a torrential downpour got in the way of that.

So, here it is. Above, you see what Waveland now looks like after having concrete barriers put about seven feet from the curb; here's Sheffield (click to embiggen): 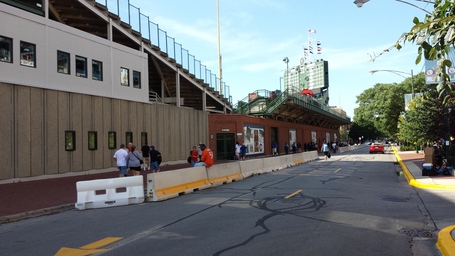 Here's what the Cubs said in an email last week to neighborhood residents about this work:

The yellow lines on the east-side curb on Sheffield and north-side curb on Waveland indicate there's no parking there anymore -- ever. You can see at least one of the arrows that's been painted on the street, indicating room for two traffic lanes, but nothing more.

I can tell you from having seen buses try to navigate Waveland Tuesday night, that it's going to be very difficult for bus dropoff of groups, and if buses wait there for groups after games, as has been the case up to now, it will make things difficult for the fire truck and ambulance that come out of the firehouse on Waveland. Perhaps other arrangements have been made for buses going forward, though I don't know where else they could stage them for dropoff that wouldn't cause quite a long walk for the people in the groups.

As noted, the Cubs plan to start construction on moving the outer bleacher wall as soon as the season ends. It appears to me as if the new outer wall will be approximately where the back edge of the bleacher walkway is now, in order to leave enough sidewalk on both streets. The new south-side curb on Waveland and west-side curb on Sheffield will be approximately where the concrete barricades are now.

It's going to be a tight fit.