It took 48 hours, but the Cubs finally, officially, permanently won this game.

Given the weirdness of this three-game series between the Cubs and Giants, I though this rain-delayed, protested, suspended game deserved a separate recap from Thursday night's regularly-scheduled game. (Also, see below for an explanation of the headline.)

It figures, doesn't it, that at the time it was supposed to resume after the Giants' successful protest, it was raining. No more than a few hundred people were in Wrigley Field when rain started falling about 3:30 p.m. Thursday and, though there was never any lightning nor high wind as there had been during Tuesday night's ridiculous delay, it did rain hard for a time. That caused water to start accumulating in the stands and pour out of a gate near the Cubs' bullpen: 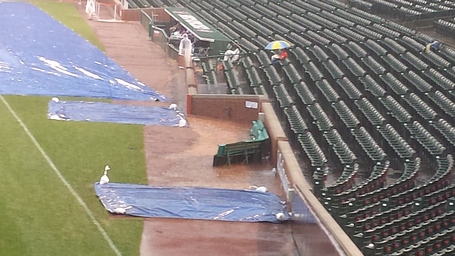 The rain finally stopped. The game resumed at 6 p.m. CT after a delay noted as one hour, 57 minutes. I had been at some of the resumptions of suspended games back in the 1980s, and this one was continued just the same way as those were: no anthem, no note that anything was starting other than another inning of the middle of a game. It was as if the rain delay had all been just on one day -- and I should note that the boxscore of the Cubs' 2-1 win shows "delay" as six hours, 31 minutes. Had that all been on one day of a game that started at 7:05 p.m. and run the reasonable 2 hours, 50 minutes shown, the game would have ended a minute or two before 4:30 a.m.

The Cubs played like it was the middle of the night. Giants reliever Yusmeiro Petit struck out the first five Cubs he faced, and just one Cub reached base in the four innings they had left after the resumption -- Javier Baez, who walked in the eighth.

Meanwhile, Jacob Turner pitched all right for the two innings he threw, although he gave up a pair of two-out hits (a double and a single) in the sixth that scored what turned out to be the Giants' only run of the game. Pedro Strop and Hector Rondon (19th save) finished up, though Rondon got himself into a bit of trouble with two one-out singles allowed. While this was going on, Turner had gone back to the bullpen to throw. This is being done, presumably, to stretch him out to eventually take Edwin Jackson's turn in the rotation. Turner was very close to sitting down and allowing someone else to take the bullpen mound in order to relieve Rondon if necessary.

But Rondon struck out pinch-hitter Gregor Blanco and got Angel Pagan on a comebacker and the Cubs had won this game for the second time.

In addition to all the notes on suspended games I posted Thursday, I received a note from Ed Hartig about a couple of other suspended/protested games in Cubs history. The first such game was July 20, 1945 when a Cubs/Dodgers game was suspended as Brooklyn had to catch a train. It was completed September 15, 1945 -- the Cubs lost that one 12-5.

Until this week, the Cubs hadn't been involved in a successfully-protested game in more than 80 years. The Cardinals protested a game of July 2, 1934 which the NL upheld. The game was resumed on July 31, 1934; the Cubs wound up winning 7-1. Via Retrosheet, here are the details of that game (edited some typos and misspellings):

So you've lived a little bit of history over the last few days. The headline to this post comes from an old playground retort; I remember this one from my childhood, perhaps you do too:

Let me make it absolutely clear that I don't really think the Giants "cheated" -- they followed the rules and, in the end, everyone did the right thing here. As I've noted over the last couple of days, I hope this game results in rule changes allowing umpires and MLB officials more latitude in suspending games that have this kind of thing happen.

A recap of the regularly-scheduled Thursday night game between these two teams will be posted shortly.