It might have rained more during Cubs games in Chicago during this homestand than ever before in a single week.

Share All sharing options for: Cubs 7, Orioles 2: The Longest Time

What is the significance of the time span nine hours, 40 minutes?

a) It's the length of Erik Satie's "Vexations," a piano piece designed to be repeated 840 times

b) It's the length of an average Edwin Jackson start

You probably don't have to guess which one I'm talking about here. The answer is (c), after another rain delay at Wrigley Field Saturday afternoon, this one three hours and nine minutes, after which the Cubs and Orioles elapsed exactly the same amount of game time, resulting in a nicely-played 7-2 Cubs win over the Orioles, winning this series for the Cubs and evening up their 2014 interleague record at 8-8 with four games to go (Sunday vs. Baltimore and three in Toronto against the Blue Jays next month).

The day started hot and sticky and sunny, but clouds gradually overspread Wrigley Field as those of us with smartphones began checking weather radars, watching a giant area of rain meander its way out of eastern Iowa through northern Illinois on its way to a rendezvous with the north side and the ballpark sometime around mid-afternoon. It hit right after Javier Baez struck out to end a productive Cubs second inning highlighted by a bases-clearing triple from Chris Coghlan.

This time, the grounds crew was prepared (though I thought they probably should have been stationed by the tarp waiting a bit earlier than they ran out of their left-field room). The tarp was deployed quickly and with no issues, and then we waited... and waited... and waited. There were impressive thunder-and-lightning displays and heavy rain for about 30 minutes, after which it tapered into a steady, moderate shower for nearly two more hours.

Before all this, Kyle Hendricks had been touched up for single runs in the first and second innings, and it's difficult to evaluate Hendricks on this brief start. The three hits he allowed in the second inning, though, were all ground balls that just barely went past the reach of Cubs fielders, so it appears perhaps Hendricks was just barely missing location.

It was obvious after the long delay that neither Hendricks nor Orioles starter Bud Norris would return, and that's where the Cubs bullpen really shined Saturday night.

Justin Grimm had by far the best of his 60 outings in relief for the Cubs this year. He threw 3⅓ innings and allowed just one walk -- that after retiring the first 10 hitters he faced with ease. He might have come out of the game at that point anyway, as the 47 pitches he threw were his season high. Great work by Grimm, who was firing 94- and 95-mile-per-hour fastballs with ease and confidence. Wesley Wright entered and struck out the next two batters to end the sixth, and though he gave up a single in the seventh, that runner was erased on an inning-ending double play.

Neil Ramirez threw the eighth, and got out of it unscathed except for a single by Adam Jones. Inexplicably, down four runs at the time, Jones tried to stretch it into a double, perhaps trying to take advantage of the inexperience in center field of Arismendy Alcantara. Alcantara, though, made a perfect throw to Logan Watkins at second to end the inning.

Zac Rosscup, in his first appearance of this stint with the Cubs, threw a scoreless ninth (one walk) to finish up. For some reason, Hector Rondon was loosening up in the pen along with Rosscup, even though he had pitched two days in a row. He wasn't needed as it wasn't a save situation, so I'm not sure what was up with that.

After the delay, the Cubs added a run in the sixth on a walk and two singles and another in the seventh on Baez's seventh homer of the year.

A few words about that Baez blast. It was hit off a 96 mile per hour two-seamer... to the opposite field. Have you ever seen anyone do that before? I haven't Baez's power is impressive to all fields; remember his first, to the right-field bullpen at Coors Field? I think it's possible, if you get the right conditions of warmth and wind some spring afternoon next year, that Baez could become the first batter to homer off the Wrigley scoreboard.

One more run was added to the total in the eighth; Logan Watkins doubled into the gap in left to score Alcantara, who had singled. Both Alcantara and Watkins had fine offensive days (evenings?), as Mendy went 3-for-4 and Watkins 2-for-4 with his first big-league multi-RBI game.

And after all of this, the sun returned to the north side not long before sunset, providing these beautiful views around Wrigley Field for the 10,000 or so of the fairly large weekend crowd who remained after the delay: 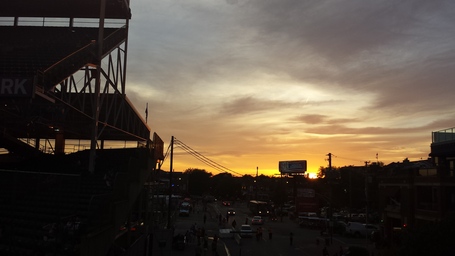 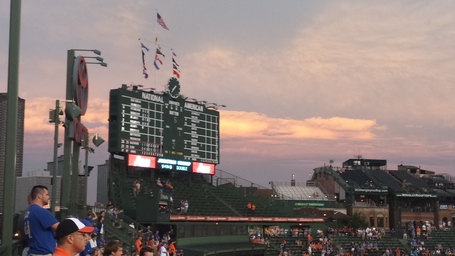 And about this series... go figure, right? The Orioles came into the series riding a four-game winning streak, just two games behind the Angels for the best record in baseball, having just swept the White Sox and with a nine-game lead in the American League East... and the Cubs take two straight from them and make it look easy.

Nicely done, Cubs. Personally, I could stand without looking at any rain for the rest of this baseball season, at the very least. On the other hand, had you gone to one specific performance of "Vexations":

18 hours, 40 minutes. No baseball game nor rain delay has ever been that long. For that, we should be thankful.

Sunday's series and homestand finale -- which, I fervently hope, will end somewhere around 4 p.m. instead of 7:30 p.m. -- will feature Tsuyoshi Wada against Miguel Gonzalez.