Pitching dominated the Hero podium in the Cubs' weekend sweep of the Baltimore Orioles.

Share All sharing options for: Cubs Heroes and Goats: Games 128-130

After a college move-in day and a widespread internet outage, there's a little catching up to do.

Game 128 (Friday - Cubs 4, Orioles 1):
Superhero - Jake Arrieta (.307). The first of several dominant performances on the mound by the Cub pitching staff in this series.
Billy Goat - Arismendy Alcantara (-.054). The whiff with runners on the corners in the third was all it took.

Graphs for Game 130 (courtesy of Fangraphs): 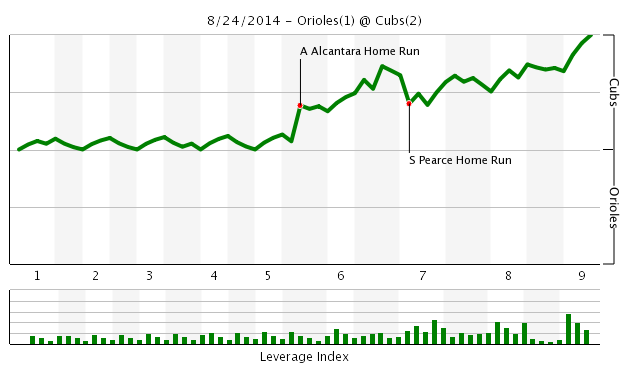 UPDATED RANKINGS THROUGH GAME 130 (Changes in Bold, Notations Below):

Wada moves up to the number two position on the plus/minus chart among starting pitchers, with Hendricks sliding back down after his short outing on Saturday.