Concessions Of A Cubs Fan: The Bagel Dog

BCB's Danny Rockett eats a Bagel Dog so you don't have to!

Share All sharing options for: Concessions Of A Cubs Fan: The Bagel Dog

The Cubs celebrated the 1990s during the homestand last week with Kerry Wood bobbleheads, throwback uniforms too recently worn to qualify as retro cool, a sweep of the A.L. East leading Orioles, and a new specialty decade hot dog, The Bagel Dog.

Why bagels to commemorate the 1990s?

Well, before the low-carb weight loss craze of the 2000s, people flocked to bagel chains to eat what we thought were healthy low-fat bagels. But just as in the 1980s when frozen-yogurt stores graced every strip mall from here to San Francisco until eventually melting away the next decade, bagel shops were all the rage in the dot-com/viagra era, until their eventual boom and bust was caused by Dr. Atkins' carb hatred and an epic wave of gluten-phobia. Wall Street's bagel battles are explained in this 1998 Chicago Tribune article.

So on Sunday, with the apprehension that I was going to buy a $7 cocktail wiener, I strode from my seat in Terrace Reserved to the Decade Dog stand after singing the stretch. I ordered, but was informed they were out of the deli mustard cups that normally came with the hot dog, but that I could use the mustard that came out of the spouted condiment receptacles just to the right of the stand. 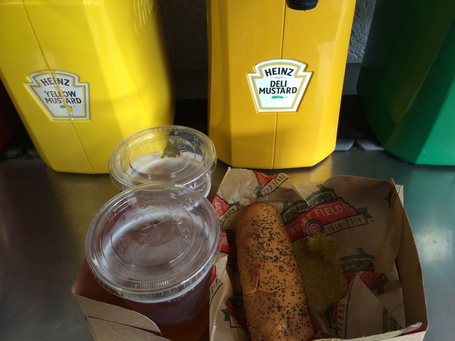 I have no idea if the mustard in the cup was supposed to be any different than the watery end of the Heinz mustard I spurted to the side of my newly-purchased, poppy-seed-covered, bagel-dough-encrusted hot dog. Because like its predecessors, the Pulled Pork Dog and the Buffalo Wing Dog, I was not served my hot dog as described, though this time, I seemed to only be missing a condiment cup. 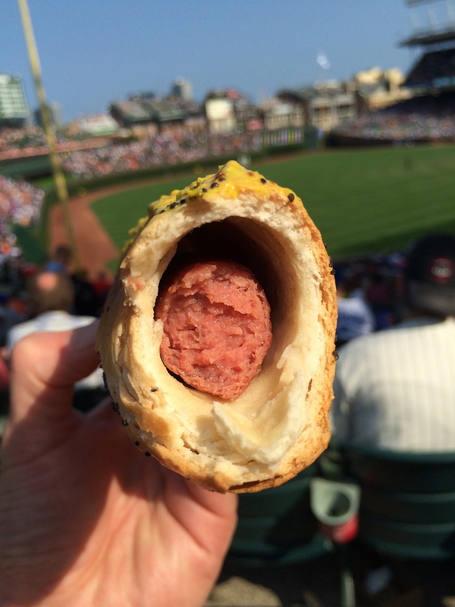 The crust was a tad stale and devastatingly crispy, and the dough was so chewy that I wondered if the chefs were paying homage to P.K. Wrigley by giving the inner bread the consistency of chewing gum. The Vienna Beef hot dog, as you can see, is too small to fit its crusty rubber shell. To use a well-known phrase: "It's like throwing a hot dog down a hallway."

Even though I love my mother dearly and was aware of her recent dental work, I persuaded her to take a bite. 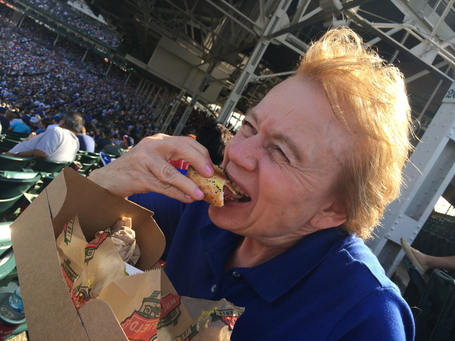 I left the shriveled tip of the dog here... 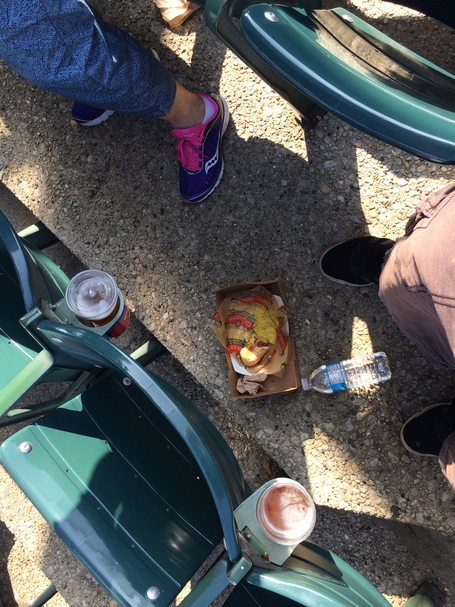 I'm looking forward to the 2000s series against the Pirates where the Decade Dog stand will be serving the most popular hot dog from the previous decades. I'm hoping it will be the 1980s Nacho Dog, which I missed reviewing. I was stuck in Denver after the Cubs series due to unfortunate circumstances. I'll explain it all in my upcoming posts: "Sordid Travels of a Cubs Fan: Los Angeles and Denver."

If I were to be in charge of choosing the most popular hot dog this year, excluding the 1920s Chicago Dog which they already sell for every game, I would pick the TV Dinner Dog. Only because I've had more fun describing this $7 travesty to friends, family, and strangers than any of the other decade dogs. I want more people to experience its pathetic attempt at edibility.

So which Decade Dog do you want to see back in rotation?! Let's vote!