It's the last of the 10 decade-themed Cubs homestands, beginning Monday at Wrigley Field.

In addition to another decade celebration (the last of the 10, the 2000s) in the upcoming homestand against the Brewers and Pirates, the Cubs will honor Chicago’s Jackie Robinson West All-Stars, who claimed the U.S. Little League title and played in the Little League World Series against South Korea. The Little League team that captured the country’s hearts this month will meet the Cubs during batting practice, be recognized on-field before Monday’s game, throw a ceremonial first pitch and lead the 7th inning stretch from the field.

There are the usual giveaway items: Friday, Sept. 5, Hall of Famer Greg Maddux will be recognized with a 3000th Strikeout Bobblehead for the first 10,000 fans. Sunday, Sept. 7, the first 5,000 kids 13-and-under will receive a Clark Build-a-Bear® Doll and the first 1,000 kids can run the bases post-game. Here's what those look like: 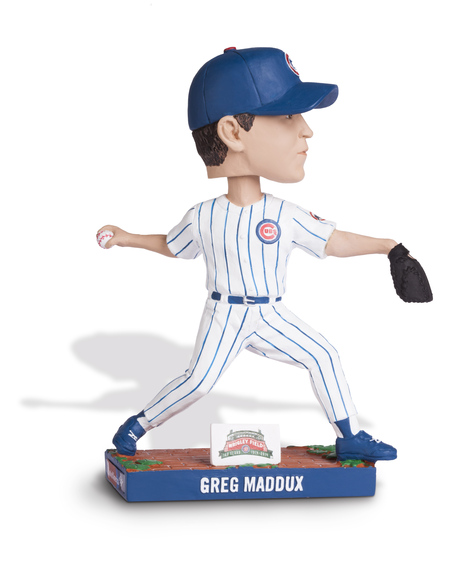 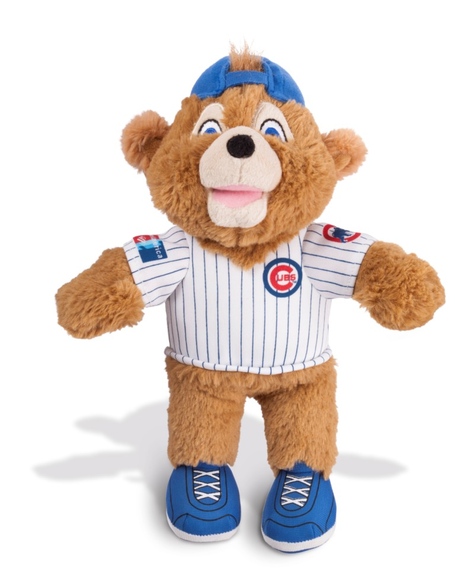 The bobblehead, in my opinion, is pretty generic-looking. As for the bear... well, you can decide.

If you come to the ballpark Monday through Wednesday you also can take home a Hall of Famer’s autograph and help out a good cause. Fergie Jenkins will sign autographs from 10:30 a.m. to 1 p.m. at the Cubs Store across from Wrigley Field Monday, September 1, and inside Clark’s Clubhouse Tuesday and Wednesday, September 2-3, from 6 p.m. until the sixth inning to raise money for the Ron and Vicki Santo Diabetic Alert Dog Foundation. Vicki Santo and Logan Burke, who was the first recipient of an alert dog from the foundation, will throw a ceremonial first pitch September 3.

The Cubs say they'll have a "throwback" uniform for the Sunday, September 7 game, "from 2008," to honor that year's N.L. Central champions. I'm not sure how they're going to differentiate that uniform from this year's, since they're essentially the same. Here's what the Cubs sent as what the uniforms will look like: 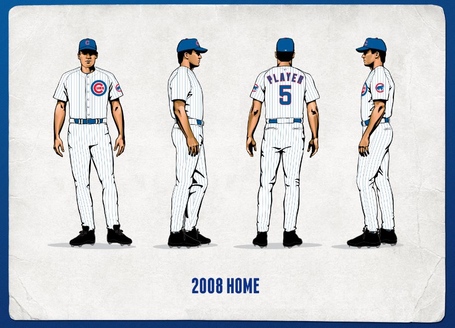 As usual, Levy Restaurants will have more selections from its decade-inspired menu at the Decade Diner, located inside Gate D near section 142. The 2000s homestand features a Kraft Grilled Flatbread with Spanish chorizo, peppers and shredded Kraft Cheese, as well as an Asian Pork Burger with house-made pork burger topped with Asian slaw and served on a toasted Hawaiian bun.

And now it can be revealed which of The Decade Dogs was the most popular from the season's previous homestands: It was the 1950s TV Dinner Dog with a Vienna Beef hot dog, mashed potatoes, gravy and corn on a hot dog bun. You can find that at the stand near section 123. In case you've forgotten (maybe on purpose?) what that looked like, here it is: 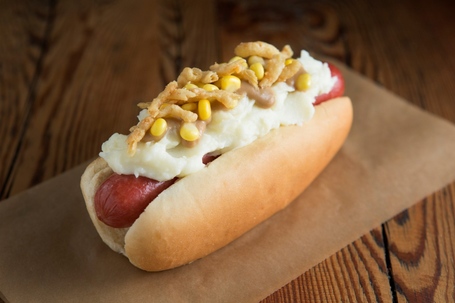 Finally, adults 21-and-over can enjoy a 2000s Playoff Punch cocktail on the main concourse at section 109 and on the bleacher patio in left field. This Cosmopolitan-inspired punch is made with Smirnoff Orange Vodka, Monin Tiki Blend, cranberry and lime juice: 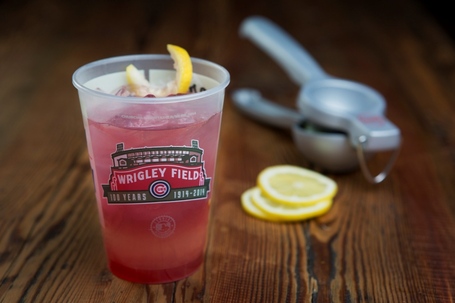