How do you keep Jorge Soler off of the Hero podium? Give him a game off.

That's not to say that Felix Doubront didn't earn it in Game 1 on Saturday, because he most certainly did.

Superhero - Jorge Soler (.391). I had a vision during this game. It was a vision of the future. The not-too-distant-future. And it was good. Really good.
Billy Goat - Welington Castillo (-.126). I'm not sure I saw him in it, though.

And for Game 1 on Saturday:

Graphs for Game 135 (courtesy of Fangraphs): 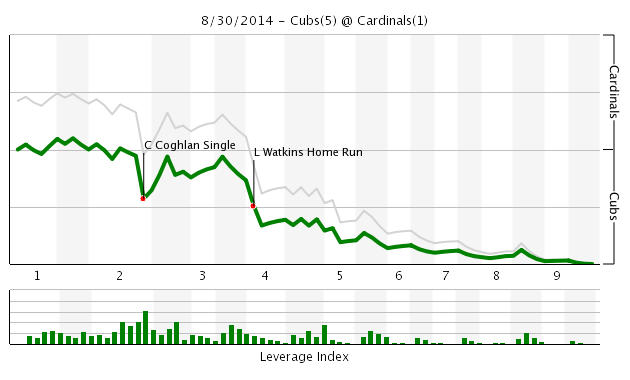 UPDATED RANKINGS THROUGH GAME 135 (Changes in Bold, Notations Below):

The Cubs go for the series win in Game 2 on Saturday night, and Soler attempts to go 4-for-4 in Hero podium visits to start his career.