Vacation's over, and it's time to look back at the podium winners from the weekend series against the Dodgers.

Share All sharing options for: Cubs Heroes and Goats: Games 108-110

I'm back, everybody! Vacations are always a good thing, especially when Six Flags Great America is involved. So who here remembers when it was Marriott's Great America?  Seems like it was forever ago...

As promised, here is a quick recap of the Friday and Saturday games:

Game 108 (Friday - Cubs 8, Dodgers 2):
Superhero - Ryan Sweeney (.321). A lot of credit goes to Matt Kemp and Dan Haren for the throwing error and wild pitch, but hey, take the top spot any way you can get it.
Billy Goat - Arismendy Alcantara (-.077). Not his night at the plate, going 0-for-5 while everyone else got on base at least once.

Graphs for Game 110 (courtesy of Fangraphs): 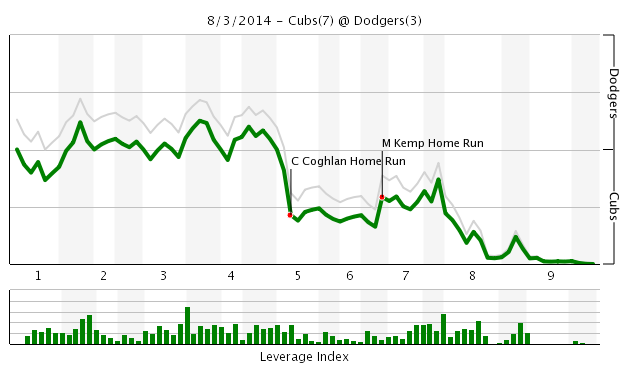 UPDATED RANKINGS THROUGH GAME 110 (Changes in Bold, Notations Below):

Rizzo and Castro take the weekend off from the podiums, leaving Sweeney, Alcantara and Schierholtz to roam freely.