MLB Games Are Too Damn Long

Baseball has no clock... but games have been getting longer and longer. How can the sport fix this?

Share All sharing options for: MLB Games Are Too Damn Long

I've written on this topic before, but I bring it up again because of what happened this past Sunday.

There was a full slate of 15 games played Sunday, August 3. Six of the 15 games ran more than three and a half hours. Yes, I realize three of the 15 games went into extra innings -- but one of those three (Pirates/Diamondbacks) was completed in 3:13, not inordinately long for a 10-inning game.

Three and a half hours is too long for a nine-inning game. Consider Sunday's Cubs/Dodgers game, a 7-3 Cubs win that ran three hours, 34 minutes. The fact that the Cubs drew nine walks didn't help; Dodgers pitchers threw 191 pitches in nine innings, a ridiculously large number. Having watched that entire game, though, the pacing was outrageously slow. And you can't blame replay review, either -- there weren't any in this game.

Sunday's Yankees/Red Sox game was even worse. The 3:42 game "featured" 337 pitches thrown, just 201 of which were strikes, and 13 walks. Despite some home runs and good defensive plays, the game was a snoozefest.

This is a trend. Yes, a trend. Here's a graph that BCB's ballhawk put together for me a few weeks ago when we were discussing this topic, of game times (in minutes) every year since 1950: 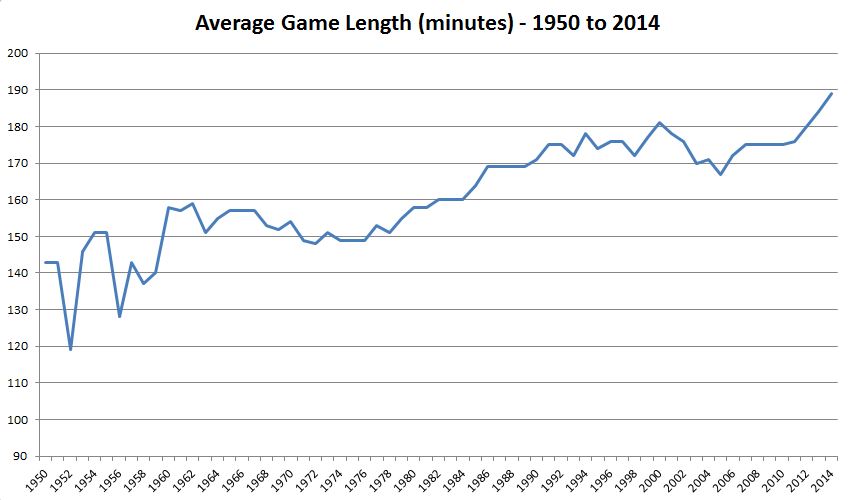 I'm not suggesting we can go back to the 1960s and 1970s, when the average game ran about two and a half hours. For one thing, mid-inning commercial-break time has been lengthened by about 30 seconds per break since then. That alone adds 18 minutes to every game.

But you can see by the way the graph is trending toward more recent years, there seems to be a strong likelihood that games are going to get even longer. You might say to me, "Just enjoy baseball! It doesn't matter how long the games are!" In a general sense I agree with that, but games that drag on and on and on are dull to watch. It's different when you see a long game with lots of action and hitting and scoring; quite another to see one where it's three and a half hours because pitchers can't throw strikes, or hitters step out of the batter's box constantly.

How can this be fixed? I have two suggestions that could speed up games if enforced:

The penalty would be a ball to the pitching team or a strike to the hitting team if they're not ready within the required time span. If you watch a game that was played in the 1970s (here's one, for example) you can see that while hitters might have taken a step or two out of the box in between pitches, they didn't stomp around for what seems to be several minutes as they do today.

Games aren't going back to a little over two or two and a half hours on average, as they were decades ago; the two-hour game is almost history (there hasn't been a sub-two-hour game anywhere in the major leagues in two years). But it would be good, I think, to shave 10 or 15 minutes off the average game time. This year's Cubs have played just two games in less than two and a half hours and aren't likely to have more than a couple more the rest of the season. Just 10 years ago the 2004 Cubs played 35 such games.

Speed up the games. Please. Before an entire younger generation starts turning them off.