And the winner of the Superhero award for Tuesday night is... not Javier Baez? Is that allowed?

Share All sharing options for: Cubs Heroes and Goats: Game 111

From the files of "Completely Coincidental, But Still Cool to Me": After Javier Baez smashed his opposite-field homer in the 12th inning, Jim Deshaies summed up Baez's night by saying "take those goat horns off, throw them away, and put on the hero's crown." Yes, I know that it's all just cliches and catchphrases, but the deep-down conspiracy theorist in me says thanks to JD for the subtle nod, even if Baez didn't truly get to the podium Tuesday night. Of course, the fact that it was late and I was tired had absolutely nothing to do with any of this. Or at least that's what I'll keep telling myself.

Graphs for Game 111 (courtesy of Fangraphs): 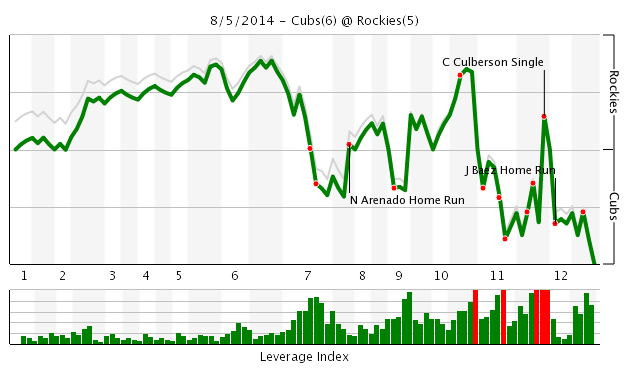 UPDATED RANKINGS THROUGH GAME 111 (Changes in Bold, Notations Below):

Castillo picks up his first Superhero award since the middle of July, while Schierholtz sinks even further into the abyss.