You might have seen this yesterday, but I thought I'd present to you a larger version of the image of the Tampa Bay Rays' "fauxback" uniform that was sent out by various folks on Twitter. If the photo above isn't large enough, here's an even bigger one (click on it to embiggen): 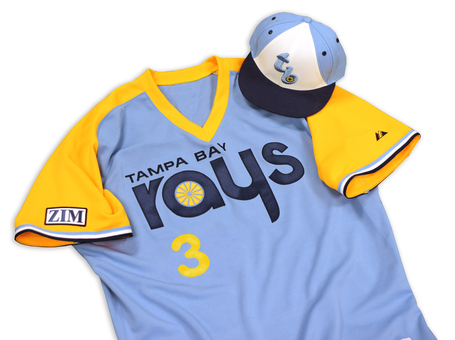 The Rays, who played their first game in 1998, got into the retro game with a "throwback" game in 2012 in which they played in a uniform that was supposed to evoke what they would have looked like if they had existed in 1979. (The photo of Rays manager Joe Maddon modeling that uniform in the link above is priceless -- don't fail to have a look.)

The Cubs are celebrating the 1980s in this homestand, and will be wearing this 1988-model uniform: 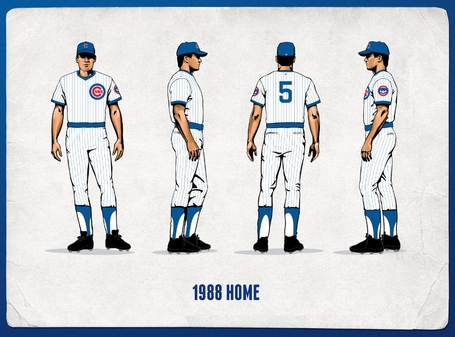 So, the Rays' uniform shown above appears to be a slightly "updated" version of the 1979 "fauxback," to make a 1980s "fauxback." The Cubs worked with the Rays to come up with the design; congrats to both teams for making this throwback-uniform day (Sunday) something fun. You'll also note the "ZIM" patch on the sleeve; Don Zimmer, who passed away two months ago, is a significant figure in the history of both the Cubs and Rays, having been a Cubs player, coach and manager and a senior adviser to Rays management from 2004-2014.