Canadians are friendly and welcoming. The Blue Jays, however, aren't being very nice to the Cubs.

Share All sharing options for: Blue Jays 9, Cubs 2: The Wheels Fell Off

TORONTO -- For six innings Tuesday night, the Cubs and Blue Jays played a nice, tight, closely-contested game, and it actually appeared the Cubs might win.

Then Neil Ramirez, who's been so good this year, faced Jose Bautista with the bases loaded and two out in the bottom of the seventh, nursing a 2-1 Cubs lead. Unfortunately, the reason the bases were loaded in the first place was that Ramirez had given up a hit and a walk to the first two batters he faced. The walk was issued to Munenori Kawasaki, a fan favorite in Toronto even though he's not really that good a player. Further, he's very difficult to walk -- just 15 walks in 234 plate appearances coming into this game.

But walk he did, and Ramirez looked like he might get out of the inning. He struck out Jose Reyes and had Bautista with a 1-2 count before missing with a pair of pitches, running the count full.

That's when Bautista ripped a double down the left-field line, clearing the bases.

Even good pitchers have bad days, and this one was particularly bad for Ramirez. Give credit to a very good hitter, Bautista, for winning that battle. Ramirez threw a couple of fastballs by Bautista at 96, and Bautista then hit another 96 mile-per-hour heater for the double.

The proverbial wheels on the bus continued to fly off when Brian Schlitter entered the game in the eighth inning. Schlitter gave up hits to the first three hitters he faced. That included a leadoff triple by Adam Lind, which really shouldn't have been a triple, but was because Matt Szczur missed a diving catch attempt. Lind is not fast; had he been fast, that play would likely have been an inside-the-park home run, because it wound up going all the way to the wall. The inning turned ugly after that, with more hits and an error by Chris Valaika at first base that allowed a run to score, but that mattered little, since that was already the fourth run of the inning and the Jays were just piling on.

Have I mentioned that I don't ever want to see Chris Valaika play first base anymore? If not, there, I've mentioned it. I had even stated in the game preview:

Like I said: By that time it didn't really matter, but Chris Valaika is not part of the future of this team. Mike Olt might be, and it could be useful to find out whether he can play first base, as a possible backup to Anthony Rizzo. Why would you bother even playing Valaika at all? He's Cody Ransom or Donnie Murphy or Joe Mather, a disposable part who won't be back in 2015. Enough already.

I'm sure you've noticed I've avoided posting the final score of this game. Fair enough, here it is: Blue Jays 9, Cubs 2. It was the Cubs' fifth straight loss, and that despite some pretty good starting-pitching work from Jake Arrieta, who left the game with one out in that disastrous seventh inning and a 2-1 lead. I suspect Rick Renteria was going to leave him in to pitch that inning until he allowed a baserunner, and with one out, Kevin Pillar singled, and at 99 pitches, Arrieta was done. Can't really argue with that; it was just a bad night for the Cubs' bullpen.

Offensively, the Cubs certainly had enough chances; they had 11 hits, leaving 11 men on base. Javier Baez had two of the hits and only struck out once (progress!); Welington Castillo had hits in his first three at-bats and drove in one of the runs, with Jorge Soler picking up the other RBI.

The Blue Jays are still marginally in contention for the second wild-card spot in the American League. After losing 15 of 21 starting August 1, they are now on an 8-3 run and have moved to within 4½ games of that spot with 18 games remaining. Tuesday, they moved ahead of a pair of teams with the win (the Yankees and Indians). It's still a long shot for Toronto, but they haven't yet been eliminated. Despite that, not very many people showed up at Tuesday's game: 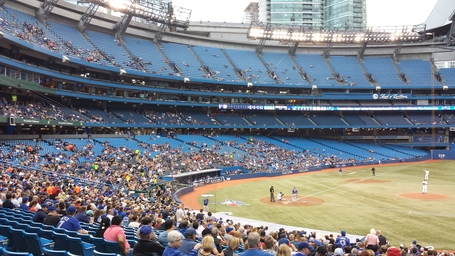 That was taken during the first inning. A few more people showed up, but not many. The total announced was 17,903, which appeared to be pretty close to the in-house count. I realize schools are in session and most of the people crowding Toronto are here for the film festival; you'd still figure more would come to see a pretty good team. The Jays are averaging over 30,000 per date (their rank in average-per-date is just three spots below the Cubs). Between innings they advertised several upcoming giveaways, most of which are on weekends, which would probably draw better anyway. You'd think they might want to do some of these on weeknights, when they might bring a few more people out to the stadium.

I met up with BCB's Danny Rockett, who's in town and was at the game. He'll have his own take on visiting Toronto after the series is over (as well as the continuation of his previous article, his trip to Denver last month). We agreed that people in Toronto have been helpful and accommodating to the visiting Americans seeing baseball at this giant stadium that's one of the few remaining vestiges of the 1970s-1980s multipurpose stadium building boom. It's just too bad we couldn't see the Cubs win. Perhaps tonight, they can salvage one game of this series when Kyle Hendricks takes the mound against Drew Hutchison.