Concessions Of A Cubs Fan: A Tale of Two Hot Dogs

BCB's Danny Rockett eats hot dogs at Wrigley Field so you don't have to!

Share All sharing options for: Concessions Of A Cubs Fan: A Tale of Two Hot Dogs

With the Decade Dog debacle finally finished (but not yet quite digested) for the Cubs 2014 season, I thought it would be appropriate to review a couple of the hot dogs Wrigley Field regularly offers as part of their standard fare.

I have not eaten this many hot dogs since high school, when I would sell my school lunch ticket for the discounted price of a dollar and almost daily eat the $1.50 hot dog and fries special at the now defunct Tasty Pup in Arlington Heights with my friend Chris Zaucha. And with good reason. Hot dogs are just bad for you. If people really knew what was in them, they probably wouldn't sell that well either -- even at the ball park. But they also taste good. Or at least some of them do...

The first hot dog I ate was sold to me by a mustachioed vendor on Labor Day. A straight up Vienna beef hot dog sold out of a steam box and wrapped in paper foil. 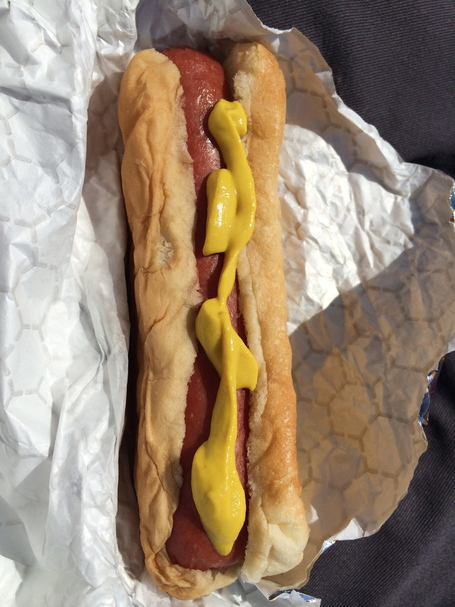 This puppy will run you $5.75, a pretty penny when you consider that a package of eight Applegate Farms Organic dogs costs the same. But hey! At least the mustard is free! As you can tell from the wet shriveled bun, this hot dog had been in its steam trunk a bit past its expiration date. Upon biting into it, the soggy bun was pasted to the roof of my mouth necessitating some fancy tongue work to unpeel it from my palate. It's a decently flavored frank, and convenient considering I didn't have to leave my seat to buy it, but the price is insulting when for just another $1.25 I could have bought a Chicago Style Dog complete with sport peppers, pickles, relish, etc. If this hot dog had cost $4, I wouldn't be as offended by the lack of quality in the wiener, but alas, I felt fleeced. And my girlfriend, who also ate one, felt sick. A quick search on the internet revealed that these steamed trunk hot dogs have added a full $1.25 to their price within the last three years. They are also more expensive than a similar offering at Yankee Stadium. Not cool. And not worth it!

The second hot dog I tried during last Friday's rain-interrupted suspended game against the Pirates was from the Decade Diner located in the Right Field Corner. The Bison Dog (with fries). 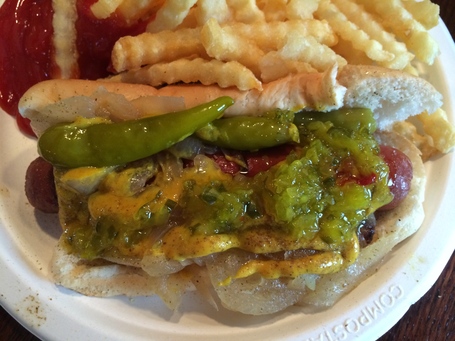 At $8.25, it's not cheap either, but at least it comes with fries and is served on a plate. You can also choose sauerkraut and/or grilled onions as condiments. I chose the latter and loaded the rest of the wiener up myself at the condiment bar which could have used some custodial attention. This dog has a smokier flavor than your regular Vienna Beef variety, and a certain essence that reminded me of a cross between an electrical fire and feet. I can't say I like bison more than beef, probably because bison is lower in fat and calories than a beef dog. However, this isn't always the case, as described in this woman's blog. But it is at Wrigley Field, with a bison dog clocking in 270 calories and an all-beef frank nearly double that. For my money, eat the beef dog. It just tastes better. Those extra calories are flavor!

I was also a little too greedy in over-condimenting my wiener and was the victim of this unfortunate sloppy accident. 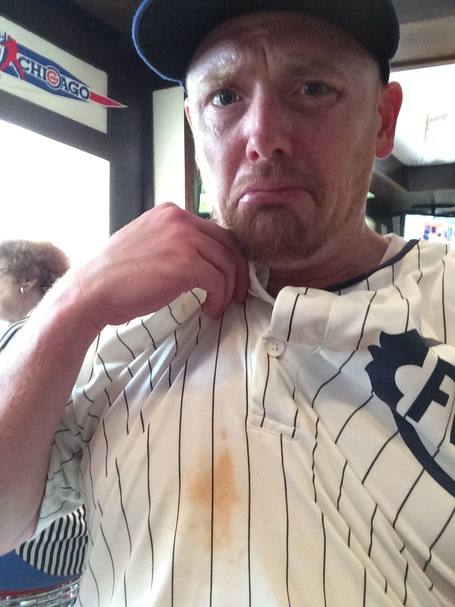 My mission is to eat all this unhealthy ball park food until I'm offered a job as a pitchman for Prilosec, Zantac, Tums or Nexium. Or at least until I'm as excited about hot dogs as this woman who I talked to briefly after they suspended the game last Friday. 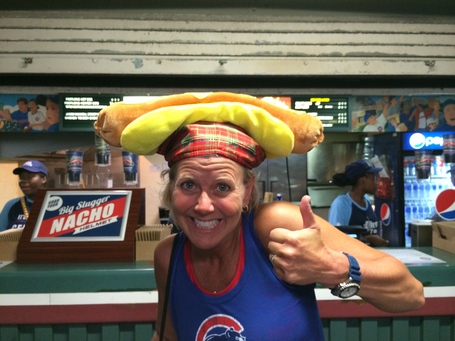