Despite two homers to bring the Cubs to within one run each time on Friday night, neither Javier Baez nor Arismendy Alcantara took the Superhero award on Friday night. Even more, one of the two didn't even make the podium.

Share All sharing options for: Cubs Heroes and Goats: Game 147

Who missed out on the podium Friday night?  That would be Arismendy Alcantara who, despite his 2-for-4 night with the hits coming early and not late, saw his chances washed away when he fouled out with the bases loaded to end the sixth.

And who topped the Heroes on Friday night?  Well, I can't give that away here. Then you wouldn't have a reason to look at all of the fancy graphs and charts and numbers and stuff. So read on.

Graphs for Game 147 (courtesy of Fangraphs): 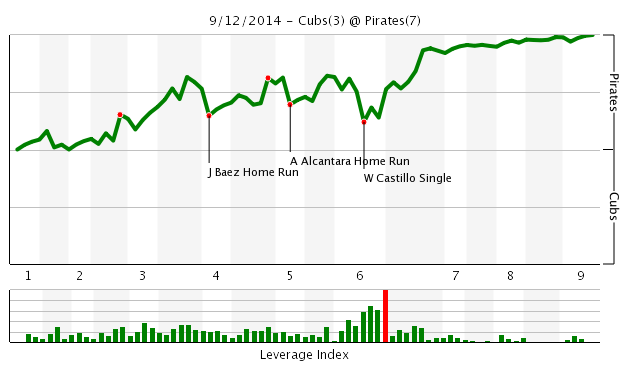 UPDATED RANKINGS THROUGH GAME 147 (Changes in Bold, Notations Below):

Castillo continues his climb up the plus-minus chart, while Grimm gets closer to territory he used to own earlier in the season.