You voted for them in the BCB poll, and the Cubs agree with your choices.

Monday, the Cubs revealed their choices and they're the same as yours:

So, Kris Bryant makes it to Wrigley Field this year after all, though not to play, just to be honored in a pre-game ceremony. There won't likely be many fans in the park, given the Cubs' play and expected cool weather, but if you want to see the Cubs' future, head to the game on Wednesday.

You already know about Bryant's dominant performance split between Double-A Tennessee and Triple-A Iowa: .325/.438/.661 with 43 home runs and 110 RBI in 492 at-bats. Tseng, who pitched for Low-A Kane County this year, posted a 2.40 ERA and 0.867 WHIP in 19 appearances (17 starts); he struck out 85 and walked just 15 in 105 innings. Having seen Tseng pitch for Kane County this summer at Lansing, I can tell you he's mighty impressive, especially with his curveball, and even more so when you consider this was his first full professional season, away from his home in Taiwan, and he won't turn 20 until next month. Here's Tseng as I saw him pitching for the Cougars last July: 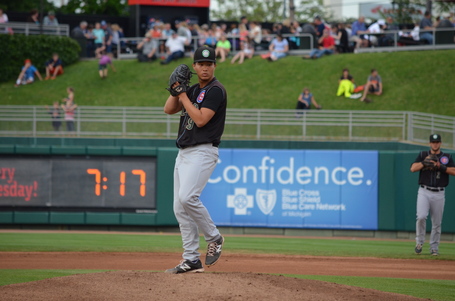 Congratulations to Bryant and Tseng. We'll see the former at Wrigley Field in a Cubs uniform sometime in 2015; if Tseng keeps it up, he'll be there a couple of years later.