Some of these prices and tiers seem very reasonably done... others, not so much.

The Cubs released to season-ticket holders Monday a schedule and a chart that show the ticket-price tiers and which games belong in each tier. Here they are (click to embiggen); comments below. 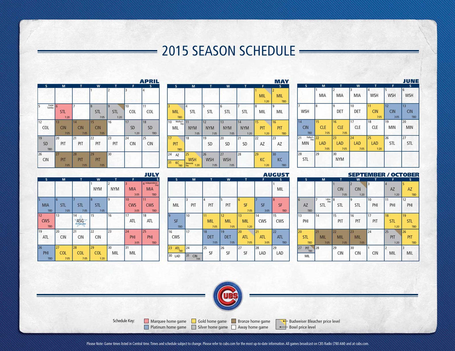 As you see on the bottom image, which breaks down the tickets by type of game, the Cubs have made different game selections for the "bowl" and the bleachers:

There are more games in the two lowest-priced tiers in the bleachers; this is likely an attempt to fill up the bleachers for early- and late-season games, where you certainly have seen all the empty seats over the last couple of years. This is all good, and in fact, all of the bleacher tiers are actually going to go down in price per game from 2014. The total prices (including tax) aren't noted, but the season-ticket price for the Bronze tier in 2014 was $17 plus tax ($2.04). In 2015 it'll be $16 plus tax. Silver and Gold pricing for bleacher season-ticket holders also went down by $1 per ticket (before the added 12 percent amusement tax).

Some of the games rated "Marquee" aren't, in my view. A weekend against the Phillies in July isn't Marquee just because it's in July, or because Ryne Sandberg is the Philadelphia manager. Those games might have trouble selling, unless the Cubs are playing well. The same could be true for the White Sox weekend; the Sox found out that pricing games against the Cubs at the Cell in their highest price tier simply resulted in fewer tickets being sold. In general, there's a lot of fatigue in Chicago regarding interleague Cubs/White Sox games; they're not anything "special" to most fans of either team anymore.

The addition of more lower-priced games is welcome, though a couple of caveats: I'm not as familiar with "bowl" pricing and there are fewer inexpensive games there than in the bleachers, and also, single-game pricing will most likely be a couple of dollars higher per ticket than the prices you see above.

This pricing scheme appears designed to get more people in the park for the early- and late-season games and in that, it will likely succeed, especially if the Cubs can get off to a good start in 2015, or if they make a splash or two in free agency this offseason, which would likely generate some pre-season ticket sales. If one or both of those things don't happen, though, Cubs ticket sales, both season tickets and single-game sales, could be sluggish to start off 2015.