Pitching comes up strong once again on the Hero podium as Kyle Hendricks takes the top step in the Wednesday night sweep of the Reds.

Share All sharing options for: Cubs Heroes and Goats: Game 152

Fun Fact:  The Cubs have had only one other starting pitcher who won seven games in his first 12 career appearances, and if you can name him your memory of the '90s is much better than mine.  I'll let you take a few guesses in the comments to see if you can come up with it.

Graphs for Game 152 (courtesy of Fangraphs): 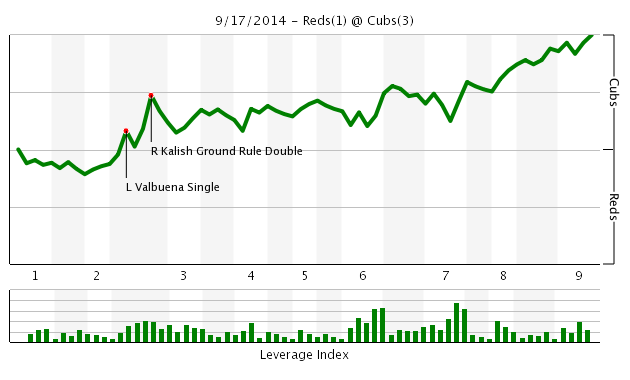 UPDATED RANKINGS THROUGH GAME 152 (Changes in Bold, Notations Below):

And the big question for the series opener against the Dodgers: Will Castillo finally escape the second step of the Goat podium? (Okay, maybe it wasn't that big of a question.)