Dodgers 8, Cubs 5: At Last, This Series Is Over

I think everyone involved in this series feels the sentiment expressed in the headline to this recap.

Share All sharing options for: Dodgers 8, Cubs 5: At Last, This Series Is Over

The Cubs were defeated by the Dodgers 8-5 Sunday afternoon, losing the series three games to one and the season set to Los Angeles four games to three.

This game was sloppy in just about every way. Jacob Turner started for the Cubs and pitched both all right and poorly; he had a couple of easy innings but struggled through the first, third and fifth, and allowed a two-run homer to Matt Kemp. The last run scored off Turner was unearned as a result of a dropped third strike on which a passed ball was charged to Welington Castillo. Turner didn't walk anyone, but neither did he throw very well. As I have said before about Turner, he has talent and throws with good velocity and is only 23 years old. I think there's still time to turn him around.

The Cubs never led in this game, but kept chipping away at Dodger leads; after L.A. went up 2-0 in the first, the Cubs scored one in the second, but then gave up two more on the Kemp homer (it might have been more had the Cubs not made a successful challenge on Chris Coghlan doubling Hanley Ramirez off first after a fly to left) before another single run in the third made it 4-2. Two Cub runs in the fifth would have tied it except for the dropped-third-strike run. At just a 5-4 deficit after five, the cubs would have had a chance except for some more chippy fielding that allowed the Dodgers a run in the seventh (throwing error by Javier Baez) and simple bad pitching that gave up runs in the sixth (off Zac Rosscup) and the ninth (off Brian Schlitter). The fielding play depicted at the top of this recap was a silly-looking play made by Kyuji Fujikawa on which he fell down fielding an infield grounder by Ramirez and managed to throw him out.

The whole day felt that way, from the grounds crew starting to roll out the tarp when a brief pre-game rainshower got intense for a couple of minutes, only to stop and roll it back up when the rain stopped. You can see here the imprint on the infield dirt of how far they got: 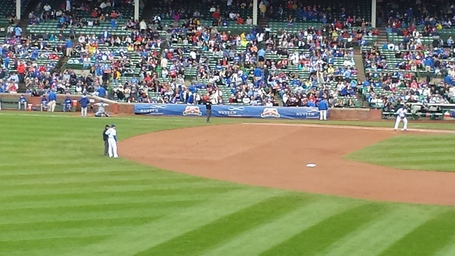 It rained again briefly during the game, just enough of a shower to be annoying, and I think finally, finally, we are done with rain for the 2014 season at Wrigley Field, as the weather forecast for the week has no rain at all. With 18 games delayed this year for over 25 hours' worth of delay time, several other games (as Saturday's was) played through some moderate-to-heavy rain, and cold weather that persisted through June, this might have been the worst weather year I can remember for baseball in Chicago. (And that doesn't even include the three road games which were rained out, in New York, Cincinnati and St. Louis.)

There isn't a whole lot more to say about this game. Castillo homered (his 12th) in the eighth, but the Cubs coughed that run back up in the ninth.

The Cubs actually had a chance to score some runs off Dodgers closer Kenley Jansen in the bottom of the ninth. Jansen, who does have five blown saves this year, walked Rafael Lopez and gave up a double to Coghlan that bounced past Adrian Gonzalez' glove at first base. But Baez, who had walked, singled and not struck out in his first four trips to the plate Sunday, took a pitch for strike three. After a groundout, Luis Valbuena was ruled by third-base umpire Hal Gibson III to have gone around on a swing for strike three to end the game. It was probably a swing, but you couldn't blame the umpires for having had enough baseball this weekend at Wrigley even if it hadn't been.

Interesting note: since Jamey Wright had started and this was a "bullpen" game for the Dodgers in which the starter didn't go five innings, it was up to the scorer's discretion on who was awarded the individual pitcher win. It went to Chris Perez, who threw a scoreless sixth.

The Dodgers head home to try to clinch their division title against the Giants, while the Cubs will host the Cardinals for the final three 2014 Wrigley Field games and try to prevent a Cardinals division clincher in Chicago. The Cardinals' magic number to clinch the N.L. Central title is five, though they can reduce it to four if they win Sunday night. That means if the Cubs can win one game and the Pirates a pair in their series in Atlanta, St. Louis won't be able to clinch at Wrigley.

That's something to shoot for in these final home games for 2014. That, and playing faster. Please?