All the highlights and lowlights from the weekend games against the Dodgers, including the WPA batting performance of the season on Saturday.

Share All sharing options for: Cubs Heroes and Goats: Games 154-156

I must admit that when the calendar turns to September my ability to watch Cub games diminishes greatly, but not because of other professional sports. Between high school football, marching band competitions, town parades and music practices there's hardly time for much else. Maybe this is why the fall is always a blur for me...

Game 154 (Friday - Dodgers 14, Cubs 5):
Superhero - Chris Valaika (.049). Had a couple of hits early while the game was still somewhat close, with a loose definition of "somewhat" being applied.
Billy Goat - Edwin Jackson (-.326). The only logical explanation I can come up with for Jackson making this start was to see if someone could unseat Nate Schierholtz from the bottom of the plus/minus chart. The evil plan worked.

Game 155 (Saturday - Cubs 8, Dodgers 7):
Superhero - Chris Coghlan (.750). The game of his career, basically. The next closest Superhero performance for the Cubs this year was from Arismendy Alcantara on July 10, and Coghlan's previous best from April 25, 2011 was completely blown away. And he wasn't even the Superhero in that game.
Billy Goat - Felix Doubront (-.433). There was a bit of a pattern to the Billy Goats this past weekend.

And as for Sunday:

Graphs for Game 156 (courtesy of Fangraphs): 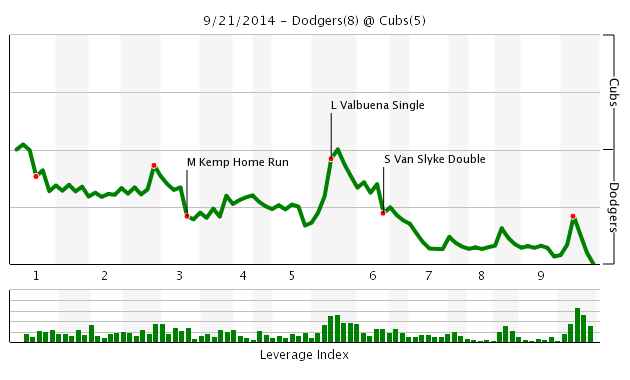 UPDATED RANKINGS THROUGH GAME 156 (Changes in Bold, Notations Below):

Coghlan rides back-to-back Superhero awards to a double-digit positive on the plus/minus chart, while Jackson becomes the only Cub to hit the minus-30 mark this season.