The End Of A Wrigley Field Era

Look closely at the photos in this post, because you won't see a view like this starting next year.

Share All sharing options for: The End Of A Wrigley Field Era

The final three day games of the 2014 season at Wrigley Field were played this past Friday, Saturday and Sunday.

I took the photo above before Friday's game, of the view fans at Wrigley have of the bleachers and scoreboard from the third-base line.

This view won't be the same starting next season, as the Cubs plan to start construction on a bleacher expansion that will include a large video board, which will be placed (approximately) where the Toyota sign is. When the Cubs return to Wrigley April 6, 2015 to face the Cardinals on Opening Day, the view above, which has (except for the addition of the Toyota sign) remained pretty much unchanged since the 1930s, will be different.

I took that photo Friday for a couple of reasons. First, because it was supposed to be the only day of the three with unlimited sunshine (that turned out to be true), and also because of this second photo, also taken before Friday's game: 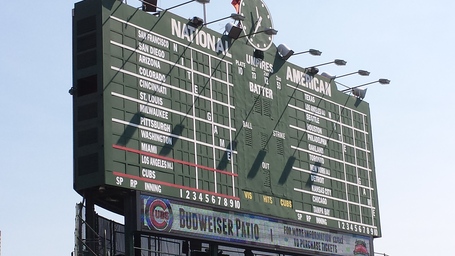 Friday, the Cubs/Dodgers game was the only day game on the schedule, thus the familiar "NITE GAME" was placed across all the other scheduled games on the board. This, of course, was the way the Wrigley scoreboard looked nearly every day (except most weekends) until 1988, when the Cubs began playing night games at Wrigley.

Now, we have 35 night games a year at Wrigley Field and so the board is filled with out-of-town scores on most game days.

Thought you'd like to see one last blast from Wrigley's past before it all changes. David Sameshima and I will head to Wrigley and take photos during this fall and winter's construction.