Major-league games are too slow. Almost everyone agrees. How to fix it? MLB forms a committee!

I've written on this topic many times and you surely know how I feel about it. Major-league baseball games are too slow-paced. It's not just the length of the games, though having four nine-inning Cubs/Dodgers games this past weekend that all went more than three and a half hours is ridiculous, but the pace of the games.

I am going to ask you a favor. If you are not interested in this topic or you think I'm writing about it too often, just pass this article by and let those who are interested in discussing it comment. It is, however, clearly a topic of interest to Major League Baseball, because they issued this press release Monday (and this release is the reason I'm writing about game pacing again):

I don't often agree with Bud, but he is absolutely right on this one. Perhaps you saw this tweet from Bruce Miles Monday:

This is posted in every park. #MLB #Cubs #pace pic.twitter.com/KppEojM7l1

Those rules, as Bruce notes, are posted in every ballpark. This commmittee -- which, unfortunately, doesn't include a single representative from the ranks of active players, umpires or managers/coaches -- ought to start by ordering umpires to strictly enforce the rules already on the books. That would be a good start, anyway.

Here's the chart that was helpfully prepared for me by BCB's ballhawk, which I repost to remind you how much the average length of a game has gotten longer over the last few years: 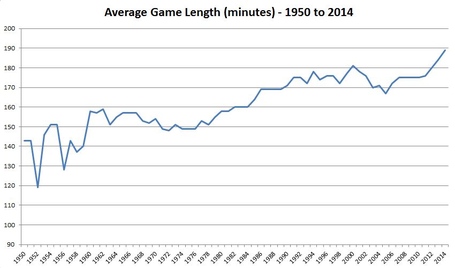 That chart was made back in June. We now have data for nearly the entire 2014 season, via Maury Brown at Forbes:

You'll note that the average length for the entire season is down a bit from the chart above, but still higher than 2013.

There's a graph in the Maury Brown article showing the average length of games by team, as well as a table showing times both home and away. Though some Cubs games this year seem interminable (and no doubt, some are), 11 teams have an average game length longer than the Cubs, who are at three hours, three minutes and 35 seconds, a bit longer than the overall average but third among National League teams. It should not surprise you to learn that the Dodgers top the N.L. list and are fourth overall.

Why is this a problem? Ed Sherman tells us why:

And there's the problem. If baseball is losing the next generation, its future is at risk. Pacing of games isn't the only reason kids aren't watching baseball, but it's got to be a primary reason. I see Wrigley Field (and other stadiums I've been to in recent years) empty out after the seventh inning if games are pushing three hours at that point, and many do.

I'm hoping this committee will come up with common-sense suggestions to speed up games and, at the very least, enforce the rules already on the books, as noted in Bruce Miles' tweet and photo. Bud hasn't had much luck with committees -- the one that was supposed to solve the Athletics' stadium issue has been around for five years having done essentially nothing -- but when he formed one to create a replay-review system, they did pretty well. Here's hoping this one has as much success.