With his walkoff single on Tuesday night, Welington Castillo takes the top spot on the Hero podium.

Share All sharing options for: Cubs Heroes and Goats: Game 158

Debbie Downer Fact: With the three-plus strikeout games from Javier Baez and Arismendy Alcantara, a Cubs player has now struck out three times or more in a game 70 times in the 2014 season. The previous record of 57 in 2002 was broken a month ago. I know: Every party has a pooper.

Graphs for Game 158 (courtesy of Fangraphs): 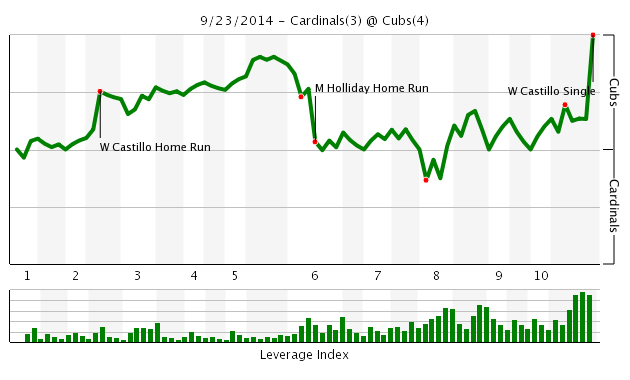 UPDATED RANKINGS THROUGH GAME 158 (Changes in Bold, Notations Below):

Castillo adds on to his hot September, while Alcantara and Baez continue their slide down the plus/minus chart.