Cubs baseball at Wrigley Field will be a different experience starting in 2015.

Share All sharing options for: Cubs 3, Cardinals 1: The End Of An Era

I lingered longer than usual after the last Cubs home game at Wrigley Field this year; usually, I spend a few extra minutes looking around a place I won't be inside for six months, but this year's final home game called for a bit more lingering. This time, the next time I set foot in Wrigley Field for a game, April 6, 2015, the old ballyard will look and feel quite different.

I've been told that the seating area, much of which will in fact be torn down to build new structural supports, will be replaced pretty much exactly as it stood Wednesday night. But there will be, among other things, a 4,000-square-foot video board not too far to my left.

It's a big change for the ballpark that's entering its second century, and one that I'm completely on board with. Video board = more revenue = better ballplayers? Go for it.

But it will be different. And so I stood and took quite a few glances around until a few friends and me were the only fans left in the bleachers; Cubs employees let us stick around. In fact, quite a number of them appeared on the warning track as we lingered, taking photos of something that will never again look exactly the same. I'll have a photo essay on Wrigley's last video-board-free day later on today.

The Cubs gave the old yard a great sendoff, defeating the Cardinals 3-1 in a well-pitched game by Jake Arrieta, who also tripled in the only runs he would need and struck out 10. Here's a fun fact about that:

Oddball Jake Arrieta trivia: He is first #Cubs pitcher to hit a triple and strike out 10+ in a game since Dick Ellsworth 7/19/1965

Here's the boxscore from that game.

But more important about Arrieta's 2014 season is this one:

Arrieta was terrific Wednesday night, at the plate and on the mound. Only a throwing error by Welington Castillo on an attempted steal, which allowed Yadier Molina to score the Cardinals' only run, prevented Arrieta from finishing the year with 16 straight scoreless innings. As it was, he threw those 16 innings over his last two starts allowing just two singles and a double, a pair of walks and 23 strikeouts. He finishes 2014 with that 2.53 ERA, as noted, though 5⅓ innings short of qualifying. Had he gotten to the 162-inning qualifying benchmark with that ERA, it would have ranked fifth in the National League. Arrieta has been a revelation this year and perhaps the best trade acquisition by Theo & Co. I look forward to him building on his 2014 success and going on to even better things in 2015. He's certainly earned the right to be the Opening Day starter in the "new" Wrigley Field, April 6, 2015, also against the Cardinals.

The Cubs tacked on an insurance run in the eighth inning when pinch-hitter Ryan Kalish's two-out double was followed by an RBI single by another pinch-hitter, Chris Valaika. As it turned out, they nearly needed that when the Cardinals put the tying run on base in the ninth. Hector Rondon appeared headed to another one of his low-pitch-count saves when a sinking line drive to right wasn't caught by Jorge Soler (charitably called a "hit" by the official scorer). Yadier Molina followed that with another single and we could all be forgiven if we thought, "Uh-oh;" how many Cubs saves over the years have we seen blown like this?

But Rondon induced another ground ball and Arismendy Alcantara snagged it and made a slick flip to Javier Baez for the final out, appropriate, perhaps, that the last Wrigley Field play of 2014 was made by two players expected to be a big part of life at the new Wrigley in 2015 and beyond. Rondon, another key part of the future, posted his 27th save. If, somehow, the Cubs could sweep at Milwaukee and Rondon could save each of them, he'd have a 30-save season, something I don't think anyone here would have predicted back in April.

The win helped out the Pirates, too; they lost their game but remained 1½ games behind the Cardinals with four to play (three for St. Louis), so Pittsburgh still has a shot at the division title, though it won't be easy as the Cardinals finish in Arizona while the Bucs go to Cincinnati. Incidentally, a Pirates sweep of the Reds could help the Cubs, too. The Cubs trail the Reds for fourth place in the N.L. Central by 2½ games. The Reds play the Brewers in a series finale Thursday afternoon before the Pirates series and if the Reds get swept out of the rest of the year while the Cubs sweep in Milwaukee, the Cubs would finish fourth.

A long shot, I realize, and I know some of you want that higher draft pick. Me, I'd like to see the Cubs start taking steps out of the division basement.

One final note about Thursday's win, something that can be revealed to all of you as the Wrigley season ends. After each win at Wrigley, I've been putting a "Wrigley Field 100 Years" sticker on the post behind our left-field bleacher seats -- this display, incidentally, was personally approved by Tom Ricketts. Now, the season ended with a 41-40 record at home, the first winning season at Wrigley Field since 2009, it can be revealed to you: 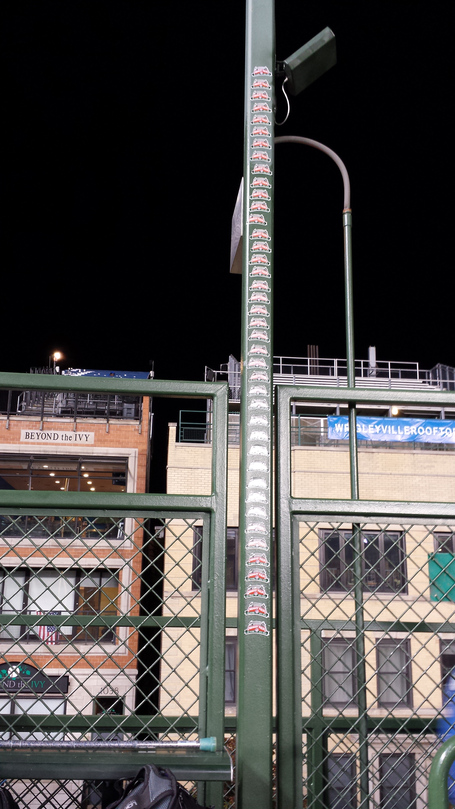 Yes, you can count them if you want. There are 41 of them. Can you tell which one is from the 16-inning win over the Rockies last July?

This season, of course, isn't quite over; there are three games left to play at Miller Park starting Friday evening. So a review of the season will wait until next week; meanwhile, we'll have plenty here the rest of Thursday and then Friday as we await the beginning of 2014's final series. Friday's game will see former Cub Matt Garza pitching (please bunt!) against Eric Jokisch, who will be making his first big-league start.

Things are looking up, I think, and Wednesday night's 2014 Wrigley finale was just about the perfect sendoff not only for the year, but for Wrigley Field as it was. Wrigley will be just fine with all the changes, I think. Different, but still baseball at the corner of Clark & Addison in Chicago.