This just in: Jake Arrieta is the bomb.

Share All sharing options for: Cubs Heroes and Goats: Game 159

Fun Fact: After Wednesday night's start, Jake Arrieta has made 25 starts this season for the Cubs and has a WHIP of 0.989. Just how rare is is it for a Cub starter to make at least 25 starts and keep his WHIP under 1.00? Since the deadball era, it's only happened two other times, and only one other time in which every appearance by the pitcher was a start and not a relief appearance.

Here's the complete list of Cub starters who have managed the feat (minimum 25 starts, WHIP of 1.00 or less):

Graphs for Game 159 (courtesy of Fangraphs): 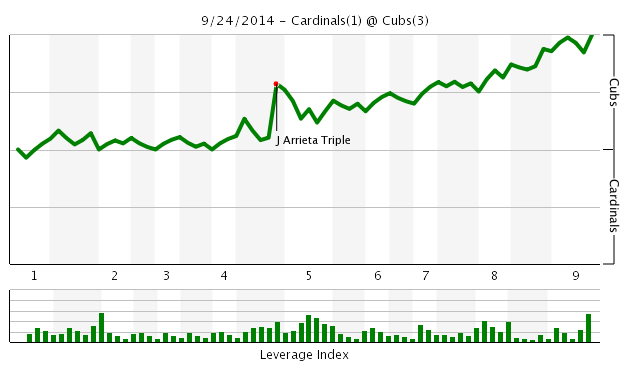 UPDATED RANKINGS THROUGH GAME 159 (Changes in Bold, Notations Below):

Arrieta straddles the first two steps of the Hero podium and breaks past the plus-30 mark on the plus/minus chart in the process.